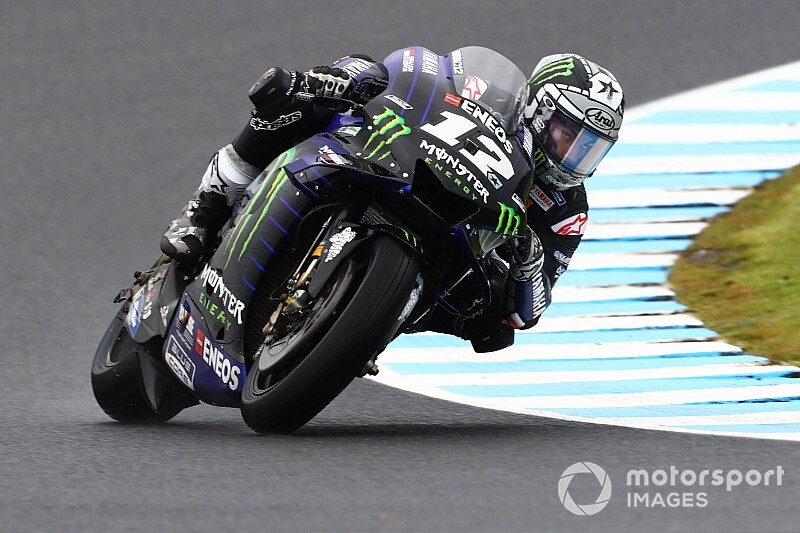 Vinales was the only rider to break the 1m39s barrier during the 45-minute session on Friday morning, ending up 0.147s clear of nearest rival Jack Miller on the Pramac Ducati.

Quartararo meanwhile had to be taken to the medical centre after being stretchered away from the scene of his crash, the Siberia left-hander, the Petronas Yamaha rookie having suffered a highside in the tricky conditions.

Miller, Vinales and Marc Marquez all took turns at the head of the timing sheets in the opening half of the session, with Honda man Marquez moving to the fore with a 1m39.719s and then a 1m39.398s some laps later.

But Vinales soon surpassed that with a 1m39.338s, and after a series of improvements he ended up on a 1m38.957s just as the rain began to intensify.

That meant the Spaniard would stay on top for the remainder of the session, although Miller was able to improve to a 1m39.104s to jump ahead of Marquez for second.

Behind the lead trio, Valentino Rossi, who is set to make his 400th grand prix start at Phillip Island, was fourth-fastest on the second works Yamaha, 0.928s off the pace.

Danilo Petrucci was best of the factory Ducatis in fifth ahead of lead Petronas rider Franco Morbidelli, with Quartararo ending up seventh after his tumble.

KTM pair Pol Espargaro and Miguel Oliveira were next up, followed by Andrea Dovizioso, who rounded out the top 10 on his Ducati.

In his first session aboard a Honda, Johannn Zarco was 13th-quickest and a little over two seconds slower than Vinales, putting him one place ahead of LCR teammate Cal Crutchlow and just behind the lead Suzuki of Alex Rins.

Jorge Lorenzo was again the slowest of the Honda runners in 18th, three seconds off the pace.

Aprilia had a strangely low-key session as both of its riders completed only 13 laps - the least of anybody - and filled out the last two positions, Andrea Iannone in 21st leading Aleix Espargaro in 22nd.

Quartararo to sit out FP2 after heavy crash