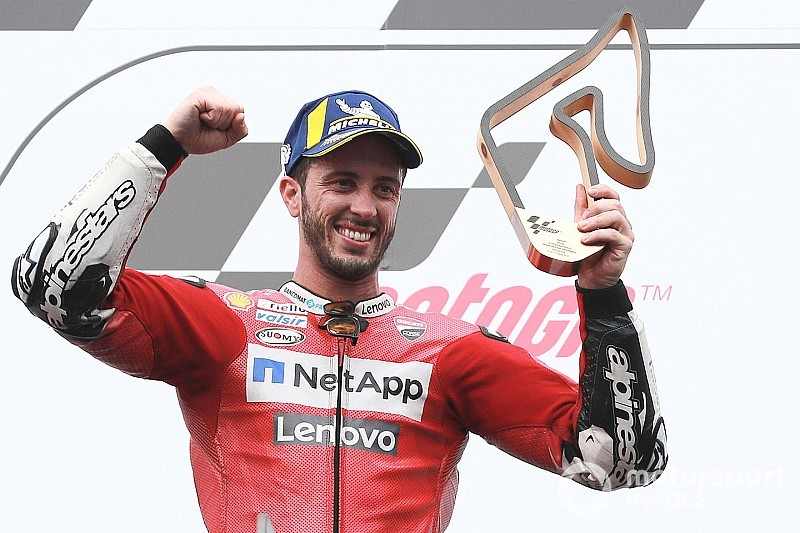 Ducati MotoGP rider Andrea Dovizioso prevailed in the Austrian Grand Prix at the Red Bull Ring, winning a sensational duel against Marc Marquez in the final corner of the race.

Marquez and Dovizioso were in a league of their own in the 28-lap event, but their battle featured several twists and turns before a forceful move down the inside of the Turn 10 right-hander decided it in Dovizioso’s favour.

It means the Red Bull Ring remains the only track on the MotoGP calendar where Marquez has yet to win, also keeping Ducati's perfect record in Austria intact.

Reigning champion Marquez, on pole by more than four tenths, maintained the lead off the line into Turn 1, but Dovizioso got close enough to duck into his slipstream exiting the corner, thus setting up a challenge into Turn 3.

Marquez braked late on the inside to cover off his Ducati rival, running wide and compromising them both, as Fabio Quartararo, Jack Miller and Alex Rins went past both of them.

As Petronas Yamaha rider Quartataro ended the opening lap with a lead of eight tenths, Dovizioso picked off Marquez for fourth, and the pair then made light work of Rins’ Suzuki and Miller’s Pramac Ducati ahead.

They reeled in Quartararo by the end of the fifth lap, with Dovizioso easing past the French rookie on the main straight and Marquez’s Honda then overpowering the Yamaha on the run down to Turn 4.

Dovizioso kept Marquez at bay until the start of the ninth lap, but by cutting across from the outside line into Turn 1 the championship leader managed a better exit onto the straight, and finally powered past the Ducati man.

Yet Dovizioso kept his composure and stayed right in Marquez’s wheeltracks for the next few laps, as the pair pulled away from Quartararo and the rest of the chasing pack

They were already 3.5s clear of Quartararo by the end of lap 19, when Dovizioso slipstreamed past Marquez on the start-finish straight.

Likewise, he couldn’t break away, and Marquez gave him no breathing room before making his own move with less than three laps to go.

The Spaniard launched his Honda down the inside of Dovizioso at the Turn 7 right-hander, and while Dovizioso then stayed alongside at Turn 8 and held the inside line into Turn 9, he ran out wide and surrendered the place to Marquez.

He then tried to overtake Marquez down the inside of the Turn 1 right-hander, but Marquez cut in from the outside to keep position through a better launch out of the corner – something he did again next time by, on the final lap.

However, Dovizioso kept him in his sights through the twisty middle portion of the track and lunged at Turn 10, leaving Marquez no room to cut back and taking the win by 0.213s.

Nearly six seconds adrift, rookie Quartararo bagged his third MotoGP podium in what was largely a lonely race for the Frenchman.

His Yamaha works counterpart Valentino Rossi charged from 10th on the grid to fourth early on, and would keep the spot until the chequered flag, as his teammate Maverick Vinales held off Rins by 0.021s to take fifth place.

KTM’s hopes for its home race suffered a big blow when Pol Espargaro’s bike suddenly lost power exiting Turn 3 on the second lap, forcing him into an early retirement and creating a bottleneck that led to LCR Honda’s Cal Crutchlow crashing out behind him,

But rookie Oliveira picked up the slack, taking a superb eighth place ahead of Dovizioso’s Ducati teammate Danilo Petrucci and the fourth Yamaha of Petronas rider Franco Morbidelli.

Takaaki Nakagami ran eighth early on, but ultimately could do no better than 11th on the second LCR bike.

Three more riders besides Espargaro and Crutchlow failed to finish, as Hafizh Syahrin crashed his Tech 3 KTM on the third lap, Miller fell out of podium contention at Turn 9 five laps after that, and Avintia Ducati’s Tito Rabat dropped out towards the end while running in the points.

Red Bull Ring MotoGP - the race as it happened