Qatar MotoGP: Vinales on pole, Rossi down in 14th 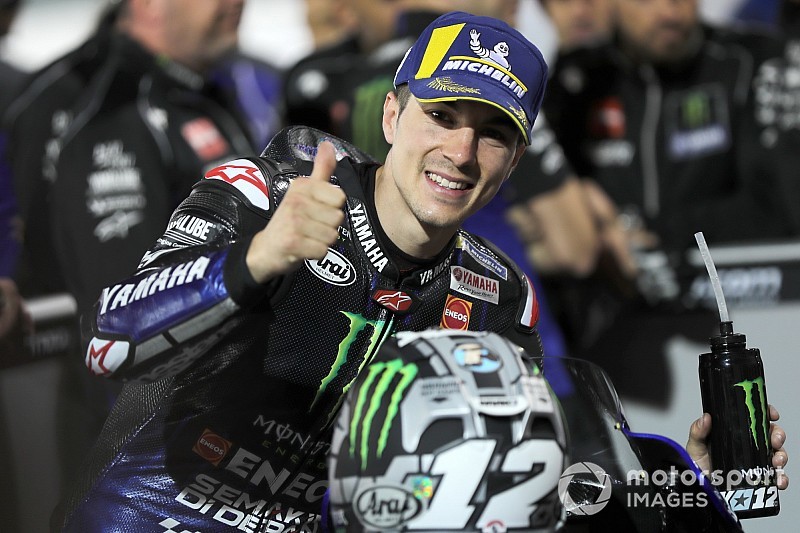 Yamaha's Maverick Vinales scored pole position for the opening round of the 2019 MotoGP season in Qatar, while teammate Valentino Rossi dropped out in Q1 and Jorge Lorenzo crashed.

Vinales continued his strong form from pre-season testing at the Losail circuit to beat Ducati's Andrea Dovizioso by 0.198 seconds in Q2, while Marc Marquez made it three different marques on the front row with a time just a thousandth slower than Dovizioso.

In the opening runs, it was Vinales that laid down an early benchmark with a 1m53.844s effort, with Takaaki Nakagami (LCR Honda) and Fabio Quartararo (Petronas Yamaha) making up an unusual-looking top three at the midpoint of the 15-minute pole shootout.

Vinales, seemingly uninterested in getting a tow from any of his rivals, then bettered his benchmark to a 1m53.546s on his second run, a time that was good enough for his seventh MotoGP pole and his second in three years at Qatar.

Jack Miller briefly moved up to second with a 1m53.809s, only to crash at Turn 2 moments later, and the Australian was eclipsed by Ducati stablemate Dovizioso by 0.065s.

With the help of a tow from another Ducati rider, Danilo Petrucci, Marquez then vaulted up to third at the chequered flag, demoting Miller to fourth.

Franco Morbidelli was eighth on the second of the Petronas machines ahead of Nakagami, who likewise made it through Q1, with Suzuki pair Alex Rins and Joan Mir and Aprilia's Aleix Espargaro making up the Q2 order.

Lorenzo's chances of escaping the opening part of qualifying were wrecked by a crash at Turn 2 with three minutes left on the clock, meaning he will start 15th on his Honda debut.

The Spaniard newcomer had been second behind Crutchlow after the opening runs, and his fall opened the door for Nakagami to grab the other Q2 transfer spot.

With no time to get back on track on his spare bike, Lorenzo was further demoted after the chequered flag by Francesco Bagnaia (Pramac Ducati) and Rossi.

Yamaha rider Rossi never really looked like threatening the top two for much of the session, but in the end the Italian was only 0.106s shy of Nakagami's time.

Pol Espargaro will open up row six on the best of the KTMs on Sunday ahead of Tech 3's Miguel Oliveira and Tito Rabat (Avintia Ducati), who likewise crashed in Q1.

Johann Zarco condemned himself to 21st with a Turn 2 crash on the second KTM, and will start two places behind Aprilia new recruit Andrea Iannone on row seven.

Qatar MotoGP qualifying as it happened