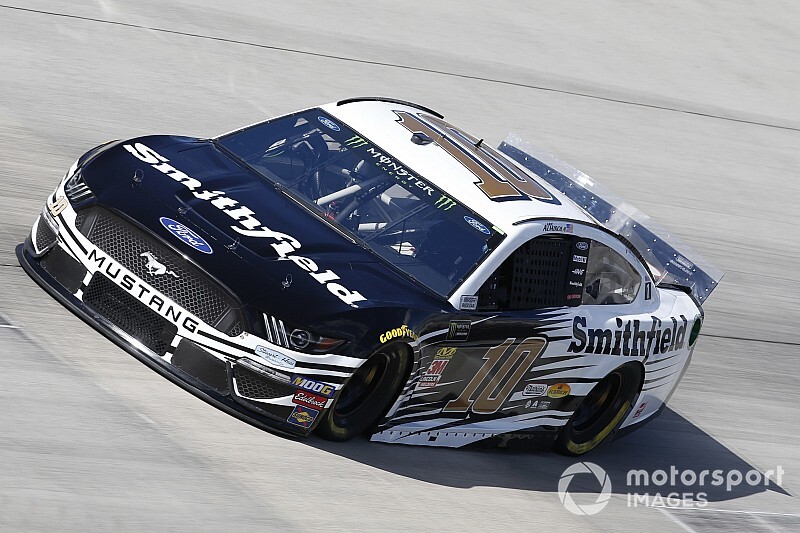 Aric Almirola and sponsor Smithfield will both return to Stewart-Haas Racing for the 2020 NASCAR Cup Series season.

“The Smithfield brand has enjoyed great success with Aric Almirola and Stewart-Haas Racing,” said Michael Merritt, Senior Marketing Director for Smithfield Foods. “It’s a true partnership that performs on the race track, with retailers and our consumers.

“Aric resonates well with them because he’s genuine and, overall, a great ambassador for the company.”

Almirola, 35, finished fifth in the series standings last season – highlighted by a win in the Talladega playoff race – and advanced to the playoffs again this year but was one of the first four eliminated following the Round 1 cutoff race at the Charlotte Roval.

“I said when I first came to Stewart-Haas Racing that this is the opportunity every driver wants, and I’m obviously very proud to have it continue,” said Almirola, who in less than two seasons at SHR has scored more top-10 finishes (27) than in his five previous seasons combined.

“Our relationship with Smithfield is strong. From the customers, to the retailers and all of the employees, we take a tremendous amount of pride in representing the Smithfield brand. They’re our biggest supporters and it’s what drives us every time we hit the race track.”

Almirola has won races in each of NASCAR’s top-three national touring series. He has two Cup Series victories, three Xfinity Series wins and two in the Truck series.

“Aric is one of the most focused and determined drivers I’ve ever met, and he’s got the skills to match,” said Tony Stewart, who co-owns SHR with Haas Automation founder Gene Haas. “He’s taken the opportunity here at SHR and seized it.

“Keeping him as the driver of the No. 10 Smithfield Ford Mustang was a priority and we’re very happy to have it continue.”

How one win has made Kyle Larson a 2019 title contender