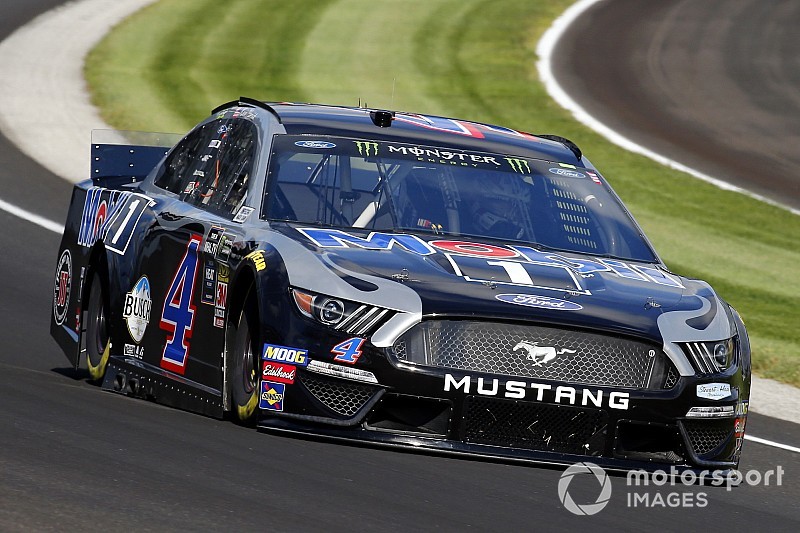 Kevin Harvick took the Stage 2 win in the Brickyard 400 when a late caution for debris prevented the race from restarting.

Harvick was in an intense battle for the lead with Larson when NASCAR had to throw a caution with four of 50 laps remaining in the stage for debris scattered in Turn 2.

Following the break between Stages 1 and 2 – which included a red flag to fix a tire barrier – several cars elected to pit but Larson stayed out and inherited the lead.

When the race returned to green on Lap 57, Larson was followed by Harvick, Blaney, Kyle Busch and Denny Hamlin.

Harvick made his way around Larson after the restart to reclaim the lead as Blaney moved up to the second position.

With 35 laps remaining in the second stage, Harvick held a small but steady lead over Blaney, although he had not been able to pull away as he did in Stage 1. Larson was third, Kyle Busch fourth and Hamlin fifth.

After 75 laps, Harvick’s lead over Blaney remained just under a second as Larson remained in third. Kyle Busch was fourth and Kurt Busch had moved up to fifth, sliding Hamlin into sixth.

On Lap 77, Alex Bowman was among the first cars to make their pit stop for tires and fuel to make it to the end of the stage.

Larson got around Blaney on Lap 78 to take over the second position. Harvick made his stop on Lap 84.

On Lap 87, smoke began pouring out of the Kyle Busch’s No. 18 Toyota. He made his way to pit road but came to a stop when fire erupted under the car and a caution was displayed.

“I didn't think he had a shot to win, we were just too tight. Unfortunately, we blew up,” Busch said. “Everything was fine, it was sudden; there was no warning.”

The cycle of green-flag pit stops had almost completed and Jimmie Johnson was scored as the race leader when the caution was displayed.

Those that had not yet pit did so under the caution. Harvick stayed out and reassumed the lead. On the restart on Lap 96, Harvick was followed by Larson, Kurt Busch, Blaney and Bowyer.

Bowman was penalized for speeding on pit road and had to restart the race from the rear of the field.

NASCAR displayed the caution again on Lap 96 for a large pieces of debris in Turn 2. The race was not able to be restarted before the conclusion of the stage.