Welcome to the latest edition of the NASCAR Roundtable where we break down Kevin Harvick's Michigan triumph and preview what's to come at Bristol. 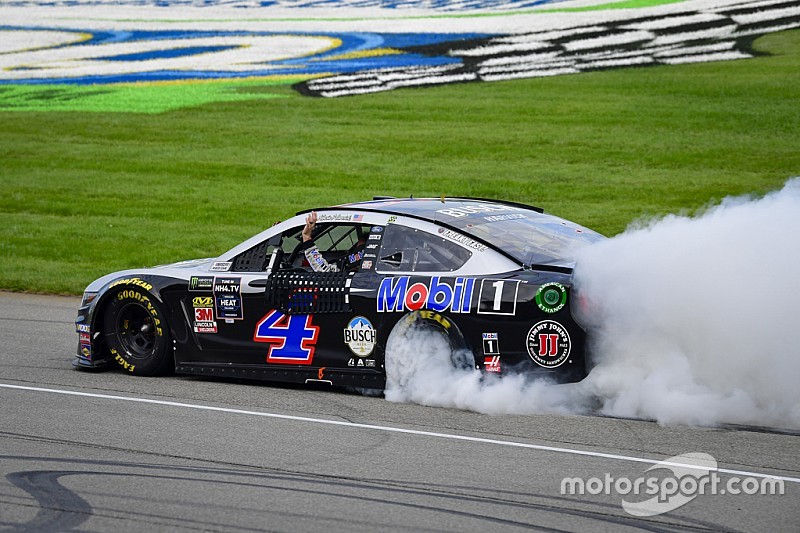 With two wins in the last four races, should we consider Kevin Harvick a legitimate championship contender this season?

Jim Utter: Absolutely. I always had a feeling that once Harvick and his No. 4 Stewart-Haas Racing team finally cracked Victory Lane this season, the floodgates would open. He's now won twice in the last four races. And there are plenty of tracks ahead on which he has typically run very well. The No. 4 team has taken a while to get a hold on the new rules package but now that they have, they could easily win multiple races all the way to Homestead.

Nick DeGroot: They are picking up momentum at the perfect time, just before the playoffs. Harvick and crew chief Rodney Childers are two that you should never count out, regardless of how many wins they have. I will always consider them title contenders by default, but they are certainly making their case stronger with these latest victories.

Tim Southers: I think Harvick has always been a contender he just needed to start winning and he has done that now winning twice in the past few weeks. I always felt he would start a string of wins once he got that first one out of the way and he is one to watch for sure in the postseason.

With three races left in the regular-season in the Cup Series, who do you expect to shine in the coming weeks among those still battling to get locked in the playoff field?

Jim: While he is already virtually locked in the playoffs by points, I still feel William Byron is capable of not only continuing his strong runs of late but also pick up his first career Cup win. The No. 24 team seems to have hit its stride and I think could be a definite spoiler in the playoffs.

Nick: Erik Jones has been knocking on the door lately so I'd watch him. Jimmie Johnson may be having some trouble but I feel he won't go down quietly. With a new crew chief atop the pit box I expect that No. 48 team to shine at some point before the regular season comes to end.

Tim: I think we will see Erik Jones (who has ran well at Bristol) lock in his playoff berth. I know this might sound crazy but I honestly think Jimmie Johnson can really show something – especially at a place like Bristol. I also think we’ll see someone come out of nowhere and pick up a win and that could be Clint Bowyer.

Austin Cindric has won the first two road course events in the Xfinity Series this season. Do you think he could sweep all four?

Jim: Austin couldn't have better timing. He was running well enough to make the playoffs but getting his first career win in the first road course was exactly what he needed. So far he is 2-for-2 and he is very good at Road America and was strong at the Roval last year. He could enter the playoffs with three wins and have perfect timing - again - when he hits the Roval in terms of advancing in the playoffs.

Nick: He will be one you have to beat, no question there. But there's so many things that can go wrong at a road course so I wouldn't hand it to him yet. And let's not forget he had to fight tooth and nail at Watkins Glen to get that win. If he does it, it won't come easy.

Tim: Cindric has certainly shown he knows how to get around a road course and I fully expect him to win at least one more road course event if not both before the end of the season.

The Truck Series playoffs begin on Thursday night. Who is likely to get a jump on the competition with a win at Bristol?

Jim: Johnny Sauter won this race a year ago and he could again be a favorite, but I think Thursday night is a prime opportunity for Matt Crafton to pick up his first win of the season, which would lock him in the second round of the playoffs. He has six top-10 finishes at Bristol in his last seven races and finished second to Kyle Busch in 2017 after leading 90 laps.

Nick: Ross Chastain. That team has been so strong and are coming off a disappointing race at Michigan where they likely could have ran away with the win if not for an accident on pit road. They will consistently be the ones to beat during this year's playoffs and that starts with Bristol.

Tim: I think Johnny Sauter, who won only once in the regular season, will start things off by getting his second straight win at Bristol after he won this race last August. While there is a lot of young and talented drivers in the playoff field, I feel the title will still come down to a veteran like Sauter or maybe even Matt Crafton.