Roundtable: Is All-Star win a turning point for Kyle Larson?

On this week's edition of the NASCAR Roundtable, we break down the All-Star Race and what it means for Kyle Larson, as well as that pit road altercation between Clint Bowyer and Ryan Newman. 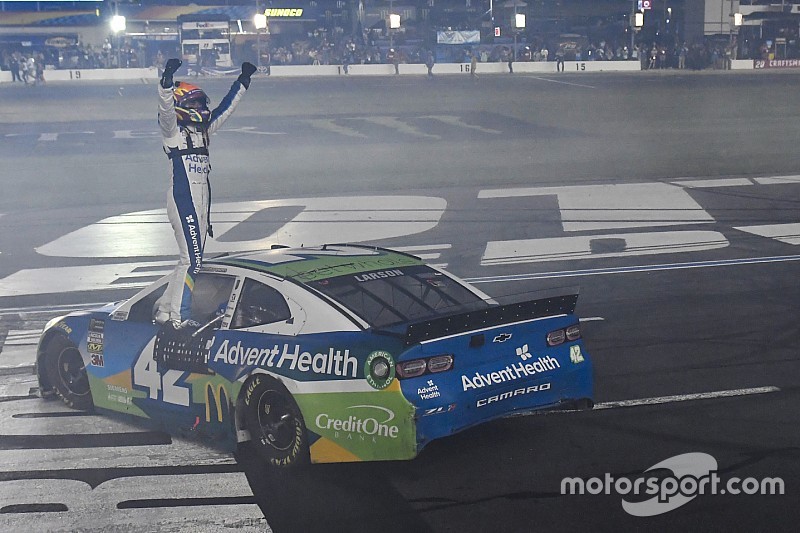 What did you think of the All-Star Race and Open?

Jim: It was the second consecutive year I have been thoroughly entertained by the competition in the All-Star Race and I honestly can't remember the last time I could say that. I just know for several years leading up to last season's race, the event had virtually no lead changes and the winner of the $1 million was anti-climatic. If you can get fans to talk about the on-track competition - which many were from the beginning of The Open prelim race to the end of the main event - then I think you've accomplished something. I certainly will be interested in seeing how the new package looks in this weekend's Coke 600.

Nick: The Open has been fantastic recently, almost makes me wish it was the main event. But the All-Star Race itself was solid with some good racing throughout. Definitely met the high-intensity threshold expected of the event and produced several thrilling moments. I just found it humorous to see how Kyle Larson cared more about the trophy than the million, which doesn't mean nearly as much as it used to. Maybe they should offer more money to the victor or even throw in some bonus points towards the championship for first-place.

Tim: I thought this was one of the best All-Star races in recent memory for me. The Open was very competitive and entertaining and the All Star race features several different storylines that eventually gave  us a winner that I am willing to bet not many predicted would win. I think the past two races have been better than the previous six or seven combined.

What are your thoughts on the Ryan Newman - Clint Bowyer altercation after the race?

Jim: I think it was silly. I think the action between the two drivers on the track was pretty tit-for-tat and while I can understand Bowyer being upset with what happened on the cool-down lap, I don't see the point of going after a driver while he is still sitting in his car with his helmet on. It was entertaining and got people talking, but I think I have to come down on the side of Ryan Newman that it was a pretty lame display.

Nick: Clint Bowyer running up to Ryan Newman's car and throwing punches was a bit cheap. I understand his frustration, but wait until the other guy isn't strapped into their race car before confronting him. It seems to me he didn't understand that they were racing for permission, hence Newman's cool down lap frustration. Wrecking cars after the race is never good, but neither is what happened on pit road. With that being said, I'm glad NASCAR didn't get involved and are letting the drivers deal with it amongst themselves.

Tim: I think it was some much-needed emotion that a lot of long-time NASCAR fans feel has been missing. I understand Bowyer being upset for being spun, but I thought he should have waited until Newman got out of the car and then ‘boys have at it’.

Kyle Larson has inched his way back into the playoff picture over the last several weeks. Does his All-Star win lead you to believe he will soon lock himself in with a victory in a regular season race?

Jim: We've know the capability was there with Kyle Larson all season, especially when Kurt Busch was racking up solid finishes in the same equipment. The biggest thing Larson needed to do was stay out of trouble and finish races, which is what he was finally able to do in the weeks leading up to the All-Star Race. While he gets no free pass to the playoffs or playoff points for his All-Star win, the momentum ought to do him and his team some good. I'm confident by the time the playoffs begin Larson will have already visited Victory Lane.

Nick: Chip Ganassi Racing has shown strength through Kurt Busch all year, so they are perfectly capable of winning. And yes, it appears Kyle Larson has finally found his footing these past few weeks. Perhaps this is a turning point for him and I do think he'll get himself a win before the regular season is over.

Tim: I think this is the win Kyle Larson needed to turn the corner and I think we’ll see him win more than one regular season race this season. He still needs to win to ensure a playoff spot, I think once he can finish some races and score a win or two he’ll be one of those we expect to see in the postseason.

The Xfinity Series returns to action this weekend at Charlotte Motor Speedway. Do you expect any surprises in Saturday's race?

Jim: I'm not sure if there will be any surprises per se. I think we'll see another battle among JR Motorsports drivers, Cole Custer and Christopher Bell. With Cup Series drivers eligible to return to competition this weekend (following the conclusion of Dash4Cash races), I would not be surprised to see one in Victory Lane again. Brad Keselowski won last year's event.

Nick: Watch out for Jeffrey Earnhardt. He's back behind the wheel of the No. 18 machine and a win for him would certainly turn some heads. We know that JGR Toyota Supra can win and he's shown promise in the few starts he's had this year, so keep an eye on the fourth-generation racer.

Tim: I think we’ll see the usual Xfinity Series regulars up front and racing for wins. I think this could be a very good weekend for JR Motorsports as I feel Justin Allgaier is poised to score a win at any moment and could come in Charlotte.