By rights, Andre Lotterer should be a three-time champion in Super Formula. But instead the German bowed out of the series with just one title to his name. So what happened to the other two?

Championships won on countback are rare, but not unheard of in motorsport – just ask Juan Pablo Montoya (1999), Sam Hornish Jr (2006) or Scott Dixon (2015), who all picked up titles in Indy car racing having drawn level on points with their respective title rivals.

But losing a championship despite having accrued the overall stronger set of results? No, it’s not Bernie Ecclestone’s hare-brained ‘medal’ system, but Super Formula’s rather bizarre tiebreak rules, which cost one of its leading lights the title not once but twice.

Andre Lotterer is best known these days for his exploits in endurance racing and, more recently, Formula E, but he’s also one of the most successful drivers in Super Formula history – trailing only Kazuyoshi Hoshino and Satoshi Motoyama for race wins, having stood on the top step of the podium 24 times between 2003 and 2017.

And yet, the German won the championship just once, in 2011. On no fewer than four other occasions, he was classified as the runner-up, but in two of those seasons he was, according to conventional countback rules used everywhere else, the rightful champion.

“That was the rule, the one who finishes in front in the final race is ahead [in the championship], and that’s what happened to me, which is pretty sad,” recalls Lotterer in a recent conversation with Motorsport.com. “I lost twice on that tiebreak rule.”

The first of those occasions was 2004, when Lotterer headed into the final race at Suzuka with a four-point buffer over Richard Lyons. Also in contention was future Super Aguri Formula 1 driver Yuji Ide, who was seven points back from Lotterer with 10 available. 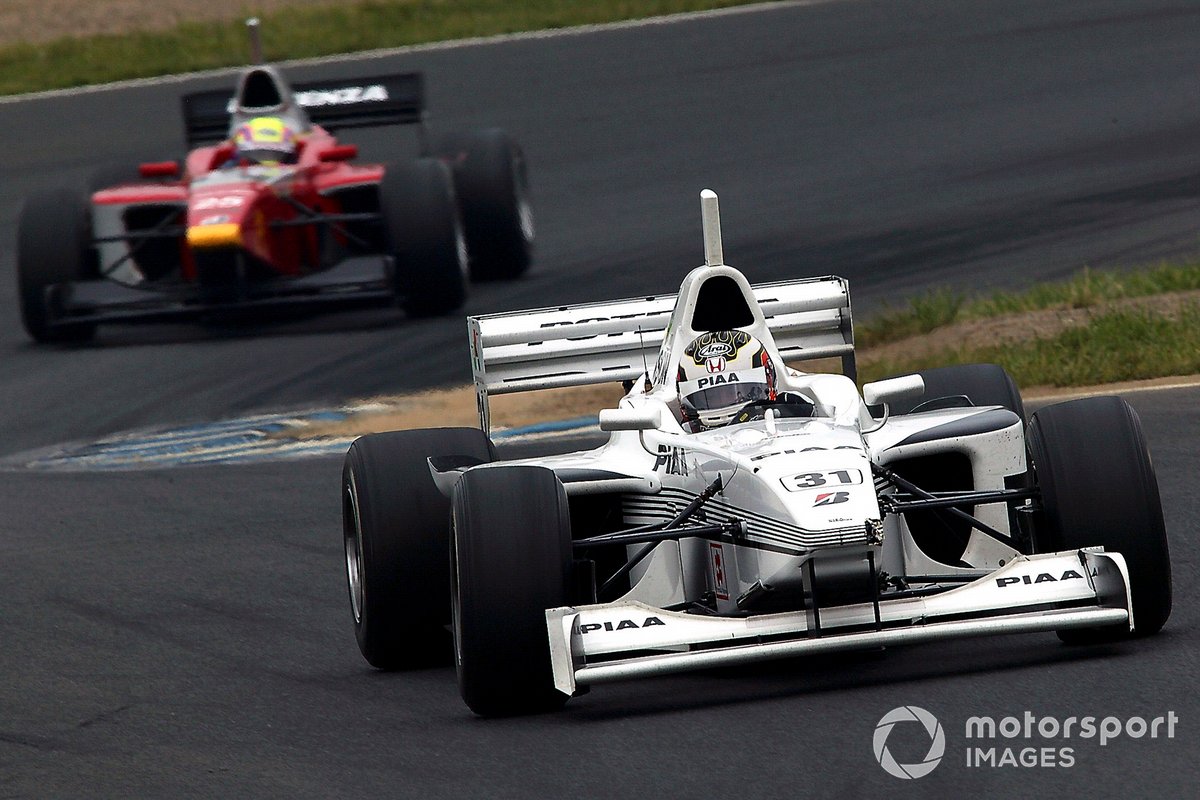 Qualifying didn’t go according to plan however, as Nakajima Racing man Lotterer managed only eighth while Lyons grabbed pole, his fifth that year out of nine races.

“I didn’t qualify well,” Lotterer acknowledges. “We were a bit back foot in terms of engines; there were two tuners, Ogawa and Tomei [Nakajima Racing was using Ogawa-tuned engines], and we were not so quick and probably didn’t do the best qualifying.”

Dandelion Racing driver Lyons led the early part of the race, soaking up pressure from Benoit Treluyer before the pair pitted together at the end of lap 19 of 46. But a slow tyre change for Lyons allowed Treluyer to get ahead, and ultimately take the win.

Lotterer meanwhile was struggling, having dropped to 13th place at the start. He’d recovered to the fringes of the points when he got bottled up behind Motoyama, who in turn had dropped out of the podium battle with a slow stop. But there was no way by.

“I was coming back in the race and I was getting close to passing Motoyama, and I had one opportunity,” recalls Lotterer. “I tried to go around the outside at Turn 1, but it didn’t work out because he was blocking. And then a bit later I tried again but I made a mistake, I went on the grass a bit, and that was it. I didn’t put it together that weekend.”

Lotterer was seventh and just outside of the points, meaning Lyons needed just to draw level with his adversary to take the title, which meant finishing third. That was because of the rule at the time that dictated if two drivers finished the year level on points, the driver that was ahead in the final race would be given the higher position in the standings.

Having lost out in the pits to Treluyer, Lyons had to turn his attention to fending off a charging Ide in the final part of the race, as the Japanese driver overturned a 12-second deficit to the second-place man after passing Juichi Wakisaka for third. At the start of the antepenultimate lap, Ide forced his way by up into second at Turn 1, leaving Lyons to complete the podium behind Impul teammates Treluyer and Ide. 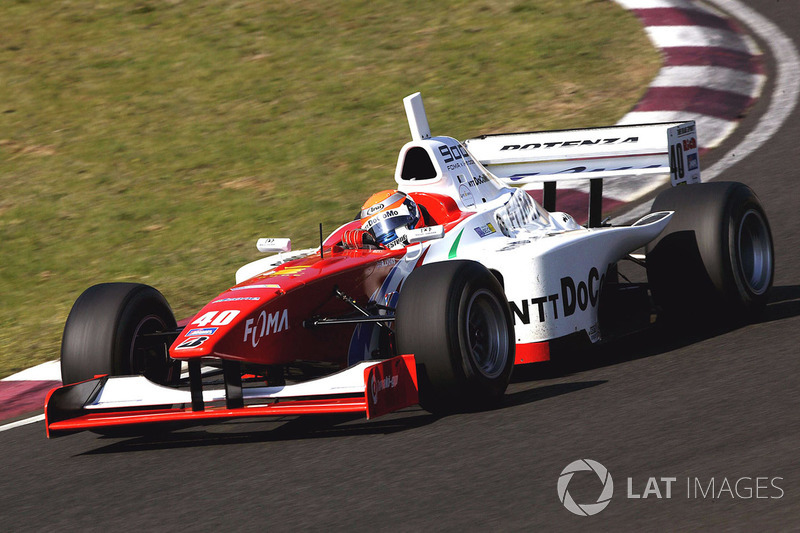 The net result was that Lotterer and Lyons both finished the year on 33 points, with Lyons ahead in the finale and therefore declared champion. But, using a normal countback system, it would have been Lotterer that got the nod. Incredibly, both he and Lyons had two wins, one second place, one third and one fourth each, so Lotterer’s seventh place at Suzuka would have actually swung it (Lyons’ next best results were a trio of eighth places).

A Lyons press release from the time claims that, knowing third was good enough, the Northern Irishman simply let Ide past. Had he been forced to hang on to second to get the title, would he have been able to hang on for another couple of laps? Or was Ide, who had been catching Lyons up by almost a second a lap, coming through anyway?

We’ll never know, but another interesting quirk in this tale is that Ide himself could have been champion – that is, if having moved up to second place, he had been gifted the win by teammate Treluyer. But, to the Frenchman’s pleasure, the order from the Impul team to move aside never arrived, even though it cost Hoshino’s squad the drivers’ title.

“If I would have let Ide pass, he would have won the championship,” Treluyer tells Motorsport.com. “But if I were in his situation, I would have not asked or wanted to win a championship like that. I was expecting the team to ask me [to let Ide through] about it but they didn’t. So that day I realised that I was really in a team which shared my values.” 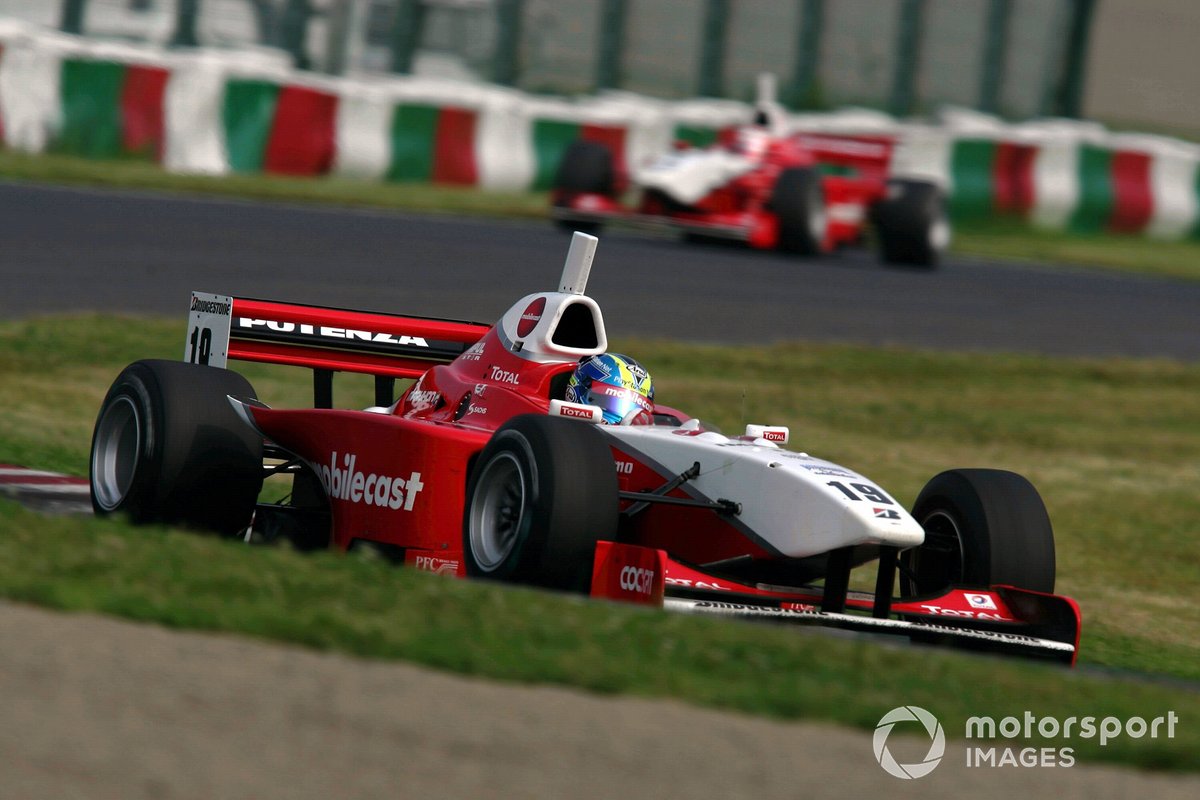 Given the notoriety that Ide achieved in his disastrously ill-fated four-race F1 stint with Super Aguri in 2006, it’s strange to think that he came so close to Formula Nippon title glory. But Treluyer doesn’t have fond memories of sharing a garage with the driver who would infamously go on to be stripped of his FIA superlicence.

“My feeling was not really good with Ide because he didn’t share anything,” continues Treluyer. “Before I was with Motoyama, which was really good and we really built something together in 2003. With Ide I felt like he was taking everything I could give and never giving me anything in return and hiding many things.

“This was not my preferred way of working and I didn’t really appreciate that. If we had worked together, one of us could have won the championship. But we know where his career went after that, so it’s not a big deal for me!”

Nine years on from that finale, Lotterer was in a very different phase of his career. In 2004 he was only in his second year of Formula Nippon, memories of being axed by the Jaguar F1 team still relatively fresh. In 2013, he was at the peak of his powers as an Audi factory driver, with two Le Mans 24 Hours wins under his belt as well as the ’11 Nippon title. 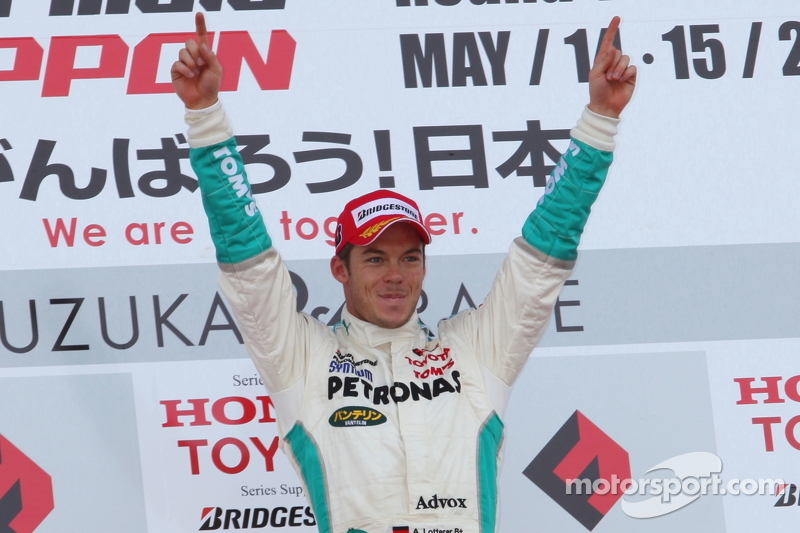 That title success came despite Lotterer being forced to skip the second round of the year at Autopolis because it clashed with Le Mans scrutineering. Winning all but one of the remaining six races ensured that nobody else had a chance of catching him.

But in 2013, the schedule for what was now known as Super Formula featured two FIA World Endurance Championship clashes. Not only did Lotterer and his Audi WEC stablemate Loic Duval miss the Suzuka season opener to take part in the Silverstone WEC round, they also had to sit out the double-header finale at the same track to race in Shanghai.

In the intervening four rounds, Lotterer won twice and finished second twice, picking up 37 points. Duval was his nearest challenger on 31, but because he had to miss the finale as well, he was no threat. The only man that could deny the German was Naoki Yamamoto.

Lotterer picks up the story: “I went into the last round with a 13-point lead [over Yamamoto] and there were 18 points to grab, and Yamamoto got both pole positions, which were worth a point each. Then he got an equal amount of points to me [winning Race 1 and finishing third in Race 2], and because I wasn’t there [he got the title].

“I flew back to Japan because the WEC race was on Saturday and I was watching it live in Suzuka on Sunday. It was very painful, I watched it unfold in front of me. It was all good until Joao Paulo de Oliveira went off at Degner [in Race 2], Yamamoto gained a position and that was it.” 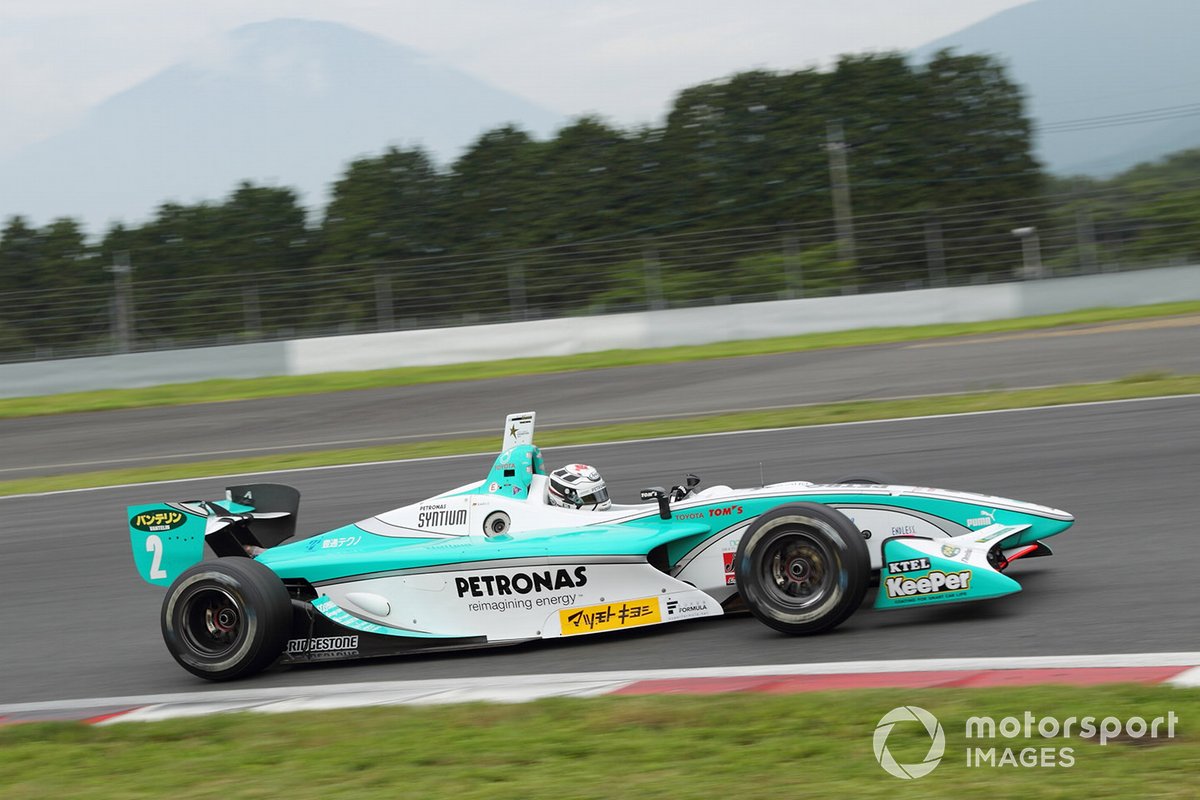 The rule that denied Lotterer that day was actually slightly different to the one that had cost him so dearly nine years earlier. Mugen driver Yamamoto was awarded the title on the basis that his combined score in the two-part Suzuka finale, 13 points, was better than Lotterer’s best single-round score of 11 at Autopolis.

It was hardly a fair situation, given that the finale was the only round where 18 points, rather than 11, were up for grabs. Had a normal countback system been in place, Lotterer would have been crowned on the basis of having won two races to Yamamoto’s one.

This arcane regulation remained in place all the way until last season – and in a twist of irony, it came very close to paying Lotterer back for his 2013 defeat.

In 2016, Lotterer went into the Suzuka finale, again a two-parter, as the rank outsider. A pair of second places in the two races left him just three points adrift of Yuji Kunimoto in the final reckoning, and in the second race he lost out to future McLaren F1 driver Stoffel Vandoorne by a mere seven tenths.

Given Lotterer didn’t win a race that year and Kunimoto won twice, the extra three points he would have gained by finding a way by Vandoorne wouldn’t have been enough in normal circumstances. But, Super Formula’s rules would have given him the crown, because he would have scored 12 points at Suzuka, besting Kunimoto’s best single-round tally of nine.

As it was, Lotterer bowed out of Super Formula after the 2017 season to focus on WEC and Formula E, with only one title to his name. And it’s something he has no regrets about.

“Especially [in 2004] it was my second year there, I was surprised to be in the fight because everyone there knows what they are doing,” he reflects. “But if I would have won the title, maybe I would have done something else and maybe I wouldn’t be where I am now.

“[Losing the title] made me stay in Japan and do a good career there, so who knows? It was a pity for my CV, but it wasn’t like losing Le Mans or something.”

Lotterer to remain in Formula E with Andretti, Askew out

Lotterer replaces Askew at Andretti Lotterer to remain in Formula E with Andretti, Askew out