Red Bull protege Juri Vips says focussing only on securing enough superlicence points to be eligible for a Formula 1 drive in Super Formula this season would be "stupid".

Last month, it was confirmed that Vips will contest the full season in Super Formula this year with the Honda-powered Mugen outfit, partnering Tomoki Nojiri.

The Estonian was given the chance to contest the final round of the 2019 season at Suzuka following Patricio O'Ward's sudden exit from the Red Bull junior scheme, albeit only finishing 18th after stalling in the pits. He did however leave a strong impression on Mugen boss and ex-F1 racer Shinji Nakano.

Vips is halfway towards the 40 superlicence points needed to race in F1, having accrued 20 in the last two years, the result of placing fourth in both FIA Formula 3 last year with Hitech and in European F3 the previous year with Motopark.

A top-two placing in Super Formula this year would make him eligible for a grand prix drive, but he insists that to think in such terms is the wrong approach.

“I’ve got 20 superlicence points – I finished fourth in really, really strong championships and you need to get 40 points, which is pretty annoying for me because I’ve never been in the best team, the winning team," Vips told Motorsport.com.

"The points system is a little bit frustrating – in F2 it would be a lot easier [he would only need to finish fifth to reach 40 points], but I don’t think it was ever an option for me.

"It costs a lot of money to go there and it would be a big, big commitment from Red Bull. They didn’t want to do it, and our family doesn’t have the money to do it.

“There’s always as much pressure as you can have when you’re a Red Bull Junior driver. But it’s stupid to have the superlicence in my head; it’s stupid to think of anything else other than: how can I win this championship?”

After a troubled race debut, Vips showed well in the Super Formula rookie test at Suzuka in December, topping the timesheets on the first day.

“On the race weekend I never actually got to use a new soft-tyre set," he recalled of the test. "I only got used soft tyres, which already felt really fast for me.

"But in the test, the first time I got to use the new soft tyres it was like… unreal. It was so fast! And then when I learned to use them properly it was like… ahhh. Amazing.”

Although Vips admitted the language barrier would be a difficult obstacle to surmount, he said the success of other foreign drivers in recent years means there's no excuse not to perform in his first season of racing in Japan.

“The racing in Japan is very different to racing in Europe," he said. "In Europe everything is regulated really heavily, and in Japan they’re pretty laid-back, but they put much more focus on other stuff. You just have to learn to work with them properly.

"It’s tough. We have briefings in Japanese and I have this data engineer who is translating to me, but not in a really good way. They talk for a minute, and he tells it to me in 10 seconds, and I’m [saying], ‘Woah, woah, be a bit more specific’.

"But Pierre [Gasly, who finished second overall in 2017 for Mugen], Stoffel Vandoorne and Felix Rosenqvist have proved you can go there and do well." 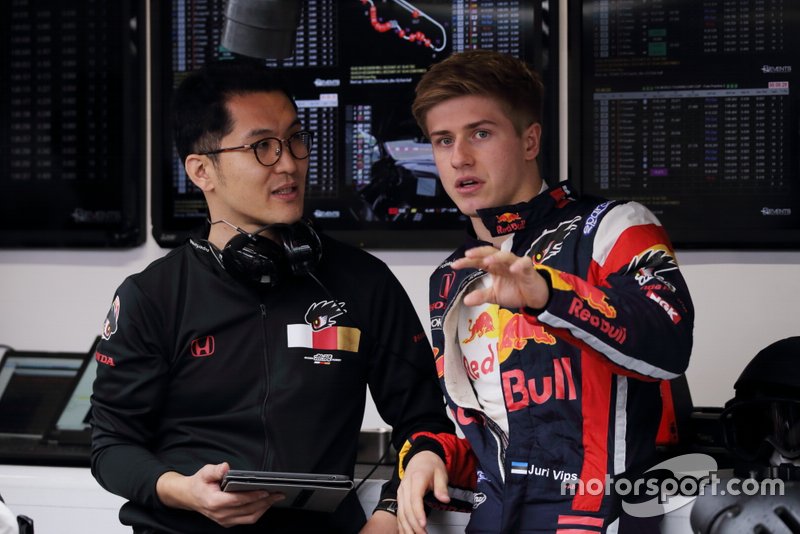