Jenson Button says the “terrible” crash that ended his SUPER GT race in Thailand was caused by the angle in which the two cars approached the corner, and was a racing incident.

Kunimitsu Honda driver Button collided side-on with Daisuke Nakajima heading into turn 7, pitching his former teammate’s NSX-GT into a spin and immediately out of the race.

Tomoki Nojiri, who was running behind the two, also got caught in the melee and retired on the spot, while damage to Button’s own Honda proved terminal and he headed back to the pits to retire the car - although he did return on track later to “do some testing”.

Speaking after race about the incident that wiped out three of the five Hondas in the field, Button told Motorsport.com: “Once I got the tyres up to temperature, we caught the GT-R [GT]300 [car at] turn 6, turn 5.

“And Nakajima-san tried to go around the outside and when we got to Turn 7... the problem was Turn 7 is obviously fast, right? And we were in very different parts on the circuit.

“So he was very on this side [inside], I was this way [on the outside]. And when you come to the corner and you do this [turn in] - I felt I left enough room, there was room for a car.

“But the problem was the angle of the cars when you go the corner. We collided and crashed. Disappointing.

“This race we were in 11th, 12th place so it was a very tough day. I didn’t realise the rear wing was broken.

“So I start pushing before Turn 4 and lost the rear because rear wing was broken, it was moving. So yeah, came back and team said 'yeah, car is too damaged to drive'.”

“We gonna crash, it’s gonna happen. We try and limit accidents and we don't want to crash with people.

“It’s not on purpose. So we try our best not to make it happen again. But I’m sure it will happen again one day.”

Buriram marked the second time the Kunimitsu Honda was involved in a collision in 2019 after Button’s teammate Naoki Yamamoto was shunted off by Koudai Tsukakoshi’s Real Racing NSX-GT while in the lead of the Suzuka race.

Button and Yamamoto have scored points only once in four races so far, courtesy of a third place finish in the Fuji 500-km event.

This has dropped the two to 11th in the championship, 24 points off leaders Kazuya Oshima and Kenta Yamashita (Team LeMans Lexus), who won in Thailand.

Button says he and Yamamoto are in desperate need of strong result at the next round in Fuji for them to have any chance of defending their crown.

“Very low, 22kg [of success ballast], hopefully that will help us,” said the 2009 F1 champion when pointed out he’d have one of the lightest cars on the grid in the bonus-points Fuji 500-mile race.

"So next race will also be very tough. We have to be in the top three, otherwise championship very difficult. 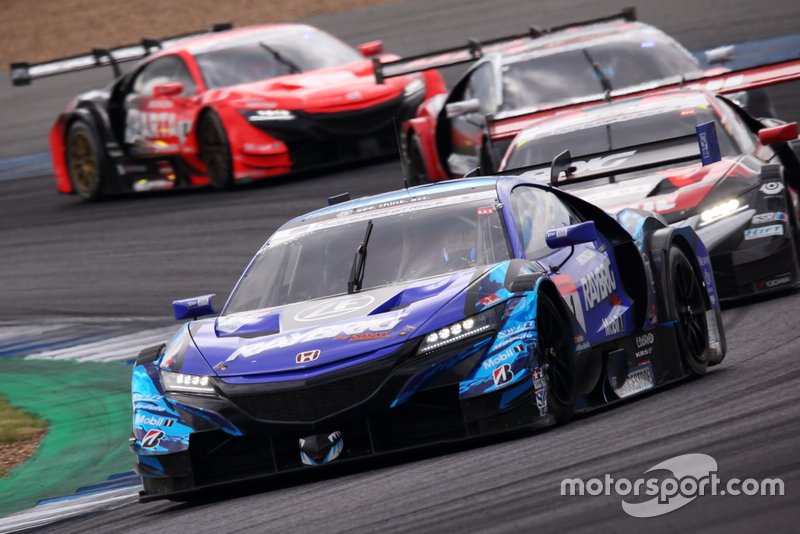 Karthikeyan hoping for "better and better" fortunes in Japan