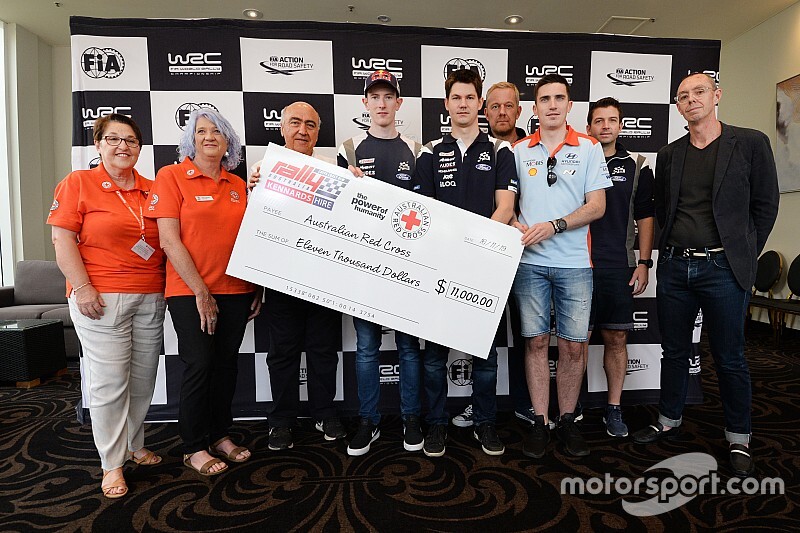 World Rally Championship crews and drivers have made an $11,000 donation to the Red Cross to help people affected by the bushfires ravaging New South Wales.

While Rally Australia was officially cancelled on Tuesday, a number of drivers have stayed in Coffs Harbour to offer support to the community as it continues to battle the fires.

A big part of that has been signing and auctioning off merchandise, Craig Breen, Dani Sordo, Teemu Suninen and Elfyn Evans on-hand today to donate $11,000 to Red Cross for its relief efforts.

"It's been a real sign of character from everybody in the World Rally Championship and the organisers here," said Breen.

"We have to try and show some solidarity with the people here in New South Wales. It's obviously a disaster for them. It's all well and good for us; we get to go on a plane and go back home. For these people here it's reality, it's a real disaster that they're in.

"You realise the extent of what's going on here. You see some of the images from out there in the bush. These people that are out there tackling it, between the firefighters and the medical teams and everything, they are real heroes.

"When you see what they have to contend with, it makes us feel quite insignificant here doing a little sport. These people are really warriors. Our hearts and thoughts are really with them now, because the war goes on.

"I think when something like this happens you have to, pardon the pun, rally around and do the best that we can. I think in some small little way we've managed to help them.

"In the next weeks and months when they're trying to rebuild everything again, what we've done can help them in some way."

Janelle Cazaubon, Red Cross' regional manager for northern NSW, said the donation will help on what will be a long, difficult road ahead.

"The donation is very gratefully accepted and very generous," she said.

"What that means is we can continue to do this work into the long-term, because while we're focussing on the events at the moment and the evacuations centres, Red Cross will be there for a long time working in recovery centres, helping communities get back on their feet, helping those individuals within communities, and working for several years to help them fully recover and re-establish."