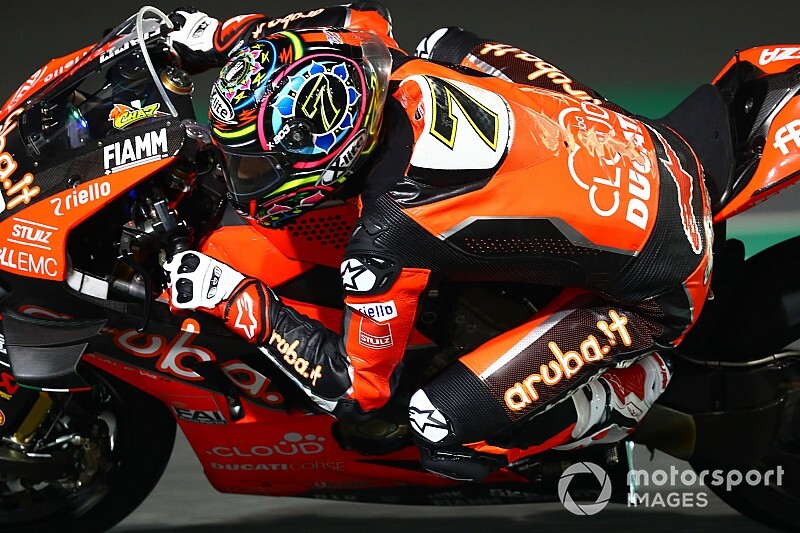 Ducati rider Chaz Davies set the pace in World Superbike Thursday practice for the Qatar season finale, despite crashing in the opening session.

Davies had hit the deck at Turn 4 in the early minutes of first practice, and was only eighth-quickest at the chequered flag, nine tenths down on pace-setter Jonathan Rea.

However, he wound up setting the fastest time of the day in the closing minutes of the second session, his 1m57.449s leaving him just over a quarter of a second clear of Rea.

Davies' teammate Alvaro Bautista, who was first to surpass champion Rea's FP1 benchmark in FP2, wound up 0.318s down on Davies in third place.

The series' leading independent rider Toprak Razgatlioglu made it a Kawasaki 1-2 with Rea in FP1, and was fourth at the end of the day, heading Yamaha's Michael van der Mark and BMW's Tom Sykes.

Baz was the only rider who did not improve upon his daytime FP1 effort in FP2 under the lights.

Leon Haslam, in his farewell outing as a Kawasaki works rider, ended the day in 12th, over a second down on teammate Rea, while the retiring Marco Melandri (GRT Yamaha) was 14th.

iXS Yamaha wildcard Dominic Schmitter, making his second appearance of the season after Misano, propped up the order.