Four-time British Touring Car champion Colin Turkington snatched pole position for the penultimate round of the season at Snetterton on the last lap of the new-format qualifying shootout. 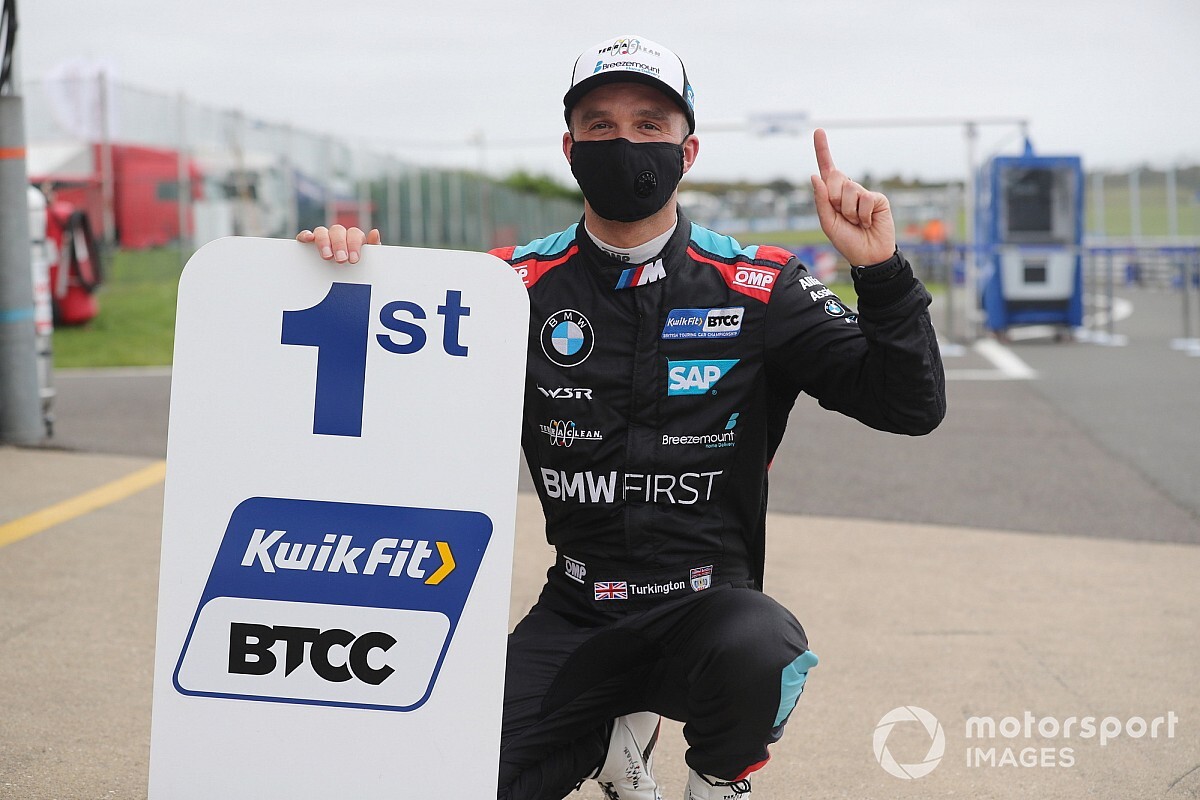 Turkington and the West Surrey Racing team played the experimental format perfectly, and the Northern Irishman, his BMW 330i M Sport carrying 48 kg of success ballast, lowered the pole time as the chequered flag flew to beat Jake Hill by 0.192 seconds.

Turkington crept through the opening 25-minute session for allcomers in seventh place, with the top 10 progressing to the 10-minute pole battle.

He was happy enough with his first run in Q1, then went for another couple of laps to assess some mid-session set-up changes made to the BMW.

He then gradually improved over the four flying laps that were possible to be completed in Q2, the rear-wheel-drive machine finally getting the most out of its Goodyear tyres on the final lap, as track temperatures only just crept about 10C.

“In Q2 the pressure was on – the majority of time was spent getting tyre temperature, and on the last lap I was fastest because that’s where you get most grip,” he said.

“The grip was low [in the cold conditions] – your mind is conditioned to braking at a certain point, but you have to rein it back a bit.

Tom Ingram was quickest for much of Q2 in his Speedworks Motorsport-run Toyota Corolla, on 42kg of ballast, but was not able to improve in the later stages and slipped to third.

He will share the second row with Rory Butcher, whose Motorbase Performance Ford Focus – on 36kg of ballast – also improved on the final lap as the chequered flag was out and was quickest in Q1.

Dan Cammish, on 54kg in his Team Dynamics-run Honda Civic Type R, only just scraped into Q2 after losing his best lap in Q1 to track limits, but managed fifth in the shootout with a late run after a pitstop.

He will share the third row with the Laser Tools Racing Infiniti Q50 of Ash Sutton, who as championship leader is carrying the full 60kg of success ballast.

Sutton was late to go on a run in Q1 and spent much of the final few minutes on the bubble, before vaulting to third.

Tom Oliphant qualified the second WSR BMW, on 30kg of ballast, in seventh place, and lining up alongside him will be the Motorbase Ford of Ollie Jackson.

Aiden Moffat comfortably made it into Q2 in his LTR Infiniti, and took ninth, while Adam Morgan lost his two push laps – the quickest of which should have put his Ciceley Motorsport Mercedes A-Class sixth – for track-limits offences, so completed the top 10.

Those just pipped for a shootout place at the end of Q1 were Senna Proctor (Excelr8 Motorsport Hyundai i30) and Josh Cook (BTC Racing Honda), with Cook having an off early in the session.

Another not to make the cut was Matt Neal, who spun his Dynamics Honda on his second run and will start 16th.

Quickest of the four making their first BTCC appearance of 2020 was debutant Paul Rivett, who qualified his Trade Price Cars Audi 20th.

Concussion rules out Thompson from Snetterton BTCC round