Stephane Peterhansel became the fourth different driver to top a stage in the 2020 Dakar Rally, as Nasser Al-Attiyah halved the gap to overall leader Carlos Sainz.

Wednesday's Neom - Al-'Ula stage included the marathon's longest timed test so far at 453km, which was split by an 80km neutralised zone and was completed by Peterhansel in just over four hours.

The 13-time Dakar champion was sixth in the starting order, but his X-raid Mini buggy was the third car to arrive at the finish line and had clocked the fastest time at all but the first waypoint.

Squadmate Sainz looked on course to minimise the damage from having to open the road, but gave up over four minutes in the final 100 kilometres of the test.

This means Toyota driver Al-Attiyah, who had entered the day as Sainz's closest rival and was a close second to Peterhansel through the stage, now trails the leader by just three minutes.

Al-Attiyah had received a three-minute penalty after Tuesday's stage as he was adjudged to have impeded Sainz.

The Wednesday stage win has elevated Peterhansel to third place overall behind his two fellow Dakar champions, with his gains coming at the expense of Mini driver Orlando Terranova and Toyota's Yazeed Al-Rajhi.

Al-Rajhi had been fastest at the opening waypoint but ended the stage 11m30s off Peterhansel's pace.

Yet this was enough for host country Saudi Arabia's leading representative Al-Rajhi to overhaul Terranova by three seconds in the general classification.

He outpaced Al-Attiyah's Toyota Gazoo squadmates Giniel de Villiers and Bernhard ten Brinke, who make up the top eight in the standings.

Two-time Formula 1 champion Fernando Alonso, who had entered the day 32nd overall after lengthy damage repairs on Monday, was 26 minutes off the pace in his Toyota.

Elsewhere, there was a roll for fellow Toyota driver Erik van Loon and a lengthy stoppage for two-time champion Nani Roma, contesting his first Dakar with German marque Borgrward.

Trucks: Karginov moves into the lead

Shibalov jumped ahead of the road-opening Karginov in the stage rankings in the final stretch, but the latter still took more than enough time out of Maz driver Siarhei Viazovich to assume the lead of the marathon.

Dmitry Sotnikov had made it a Kamaz 1-2-3 on the day but is unlikely to feature in the podium conversation as he is two hours down in the general classification.

The Russian manufacturer's reigning champion Eduard Nikolaev has continued to struggle in 2020 edition, surrendering nearly half an hour to sit 1h11m26s behind Karginov after four stages.

A late setback for erstwhile stage leader Francisco Lopez paved the way for Guthrie to win the stage by 19 seconds over Aron Domzala.

Austin Jones made it three Americans in the top three on the day.

Jose Antonio Hinojo Lopez now leads the rally, having jumped ahead of Lopez and overnight leader Casey Currie, who make up the top three.

Sergey Karyakin and Jones are fourth and fifth overall respectively, the latter just 7m30s off the lead.

Guthrie's fellow Red Bull representative Cyril Despres didn't make it to stage finish on Tuesday and will now restart the rally under the 'Dakar Experience' rule in the fifth stage. 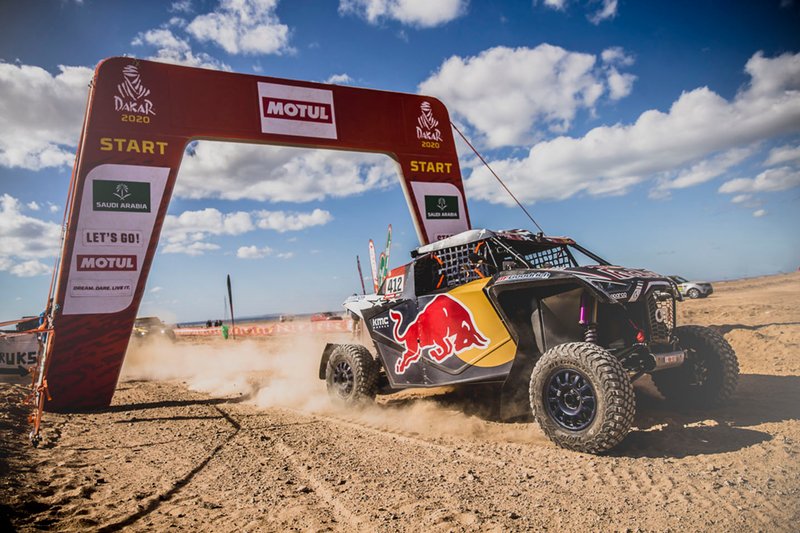