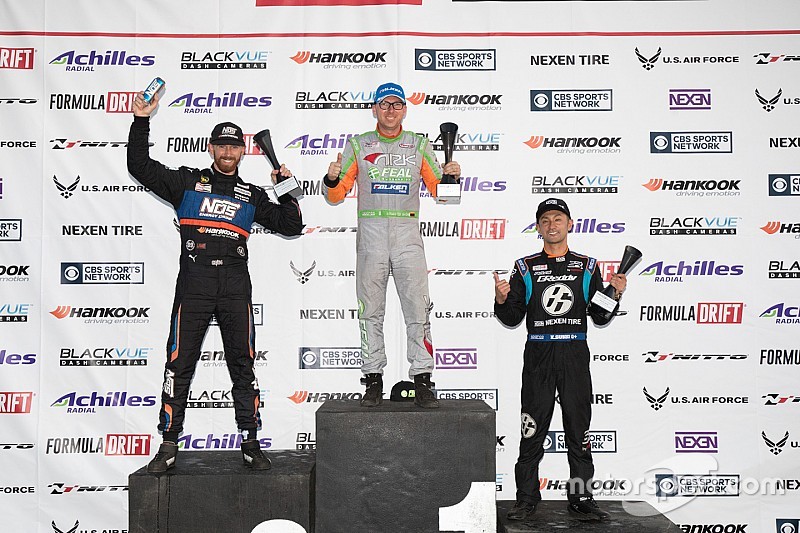 Aurimas “Odi” Bakchis takes the victory to shake up the standings

Evergreen Speedway hosted Round 6: Throwdown in the Pacific Northwest. The action packed event showcased some of the closest battles to date. The competition was fierce as many of the high ranked drivers were taken out early in the competition opening the door for the other drivers to move up in the standings. With two events remaining in the 2016 Pro Championship season less than 55 points separate the top four drivers.

“It was awesome to treat the capacity crowd to an amazing weekend of competition, during one of the busiest event weekends in the region.” said Jim Liaw, President of Formula DRIFT.

The highly competitive event saw a shake up in the Pro Championship standings with Vaughn Gittin, who qualified first and was on top of the standings heading into Round 6, lose in the Top 16, which opened the door for the other drivers as Gittin moves down to third place overall by only 15 points. 2-time champion, Chris Forsberg in the NOS Energy / Hankook Tire Nissan 370Z faced Matt Coffman in the Coffman Racing Nissan 240 in the semi-finals. Forsberg edged out the young driver to advance to the Finals. Ken Gushi in the GReddy Racing / Nexen Tire SR by Toyota 86 met Bakchis in the semi-finals. Bakchis outdrove his opponent to move to the Finals. Errors on Forsberg’s run helped give Bakchis his first victory of the season. Forsberg’s second place finish moves him into the lead by 5 points over Fredric Aasbo.

“I’m really happy with the win. It’s been a lot of work on our part and with our sponsors Ark Performance, Feal Suspension, and Falken Tire,” said Aurimas “Odi” Bakchis, winner of Round 6: Throwdown. “I really want to keep this momentum going into the next round and am excited for the rest of the season.”

The 2016 Formula DRIFT Pro Championship will continue to Round 7: Showdown on September 9-10, 2016 at Texas Motor Speedway.