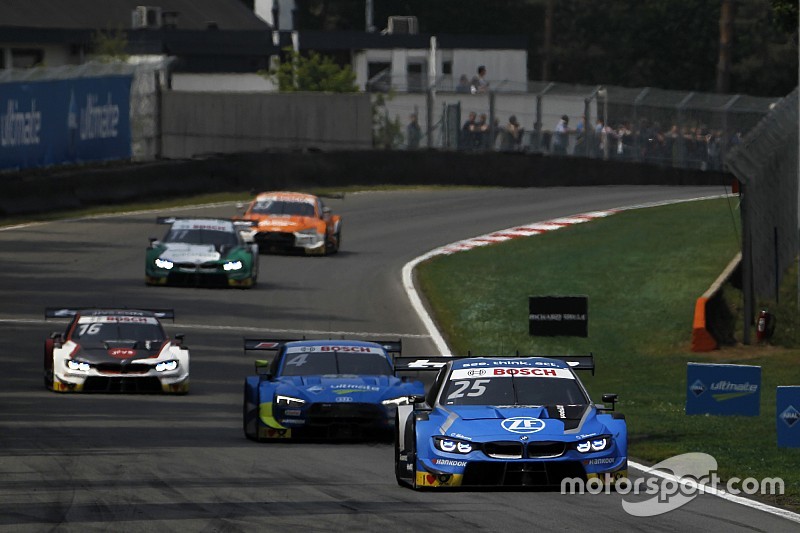 The DTM allowed its teams to make changes to its steering column systems at Zolder because of the vibrations caused by the new Class One engine that has impacted reliability.

Several retirements at both Hockenheim and Zolder were related to standardised parts breaking due to the higher frequency in which the turbocharged two-litre in-line engine vibrates compared to its old naturally-aspirated V8s.

As the engine is fitted to the monocoque chassis, the vibrations were able to cause damage in areas that included the steering columns.

An ITR spokesperson told Motorsport.com: "For this weekend in Zolder, the steering system, which remains a DTM control part, was temporarily freed up for adaptation by the manufacturers, and a technical update published by the DMSB.

"Now, if necessary, the manufacturers have a free choice of material for the casing and mounting.

"The background to this decision follows reports of occasional damage to the casing during the Hockenheim weekend, which probably resulted from vibrations relating to the way in which it was mounted.

"Given the limited amount of time between Hockenheim and Zolder, the manufacturers concerned were given the option to reinforce the casing on an individual basis following the freeing-up of the component."

Motorsport.com understands that the issue was related to fabrication and parts carried over from 2018, with support from Japan's Super GT - that also uses the Class One engine design - helping to improve reliability.

Several within the paddock pointed to the fact that the stable long-running V8 era meant there was a perception that the reliability appeared significantly worse than it actually was.

Asked by Motorsport.com about the new engines causing reliability problems, Berger said it was "just early things. Less than I thought.

"I think it takes two or three races and then it will be under control".

One DTM driver outlined the wider impact of the Class One engine in that the more efficient engine had a knock-on effect in the DTM cars' reliability.

He said: "There's a lot of spec parts built for cost, not performance gains. Clearly, they're weaker in a certain way, but they're [DTM] reacting and getting it together in the right way.

"I just think it's more expensive than people expected because you're having to replace things differently.

"You're not only dealing with vibrations, but you're also dealing with more heat, more issues all the way through."

Bart Mampaey, the boss of BMW Team RBM, told Autosport that the Class One engine has "been a tremendous challenge".

Audi motorsport boss Dieter Gass told Motorsport.com ahead of the Zolder running that: "We [the DTM] have come out of a period with known technology, known engines and reliability seemed to be granted.

"Now it's all new, the surroundings too, and it's not so straightforward now. I think we need to get used to it.

DTM wanted to pit Rossi against Dovizioso at Misano