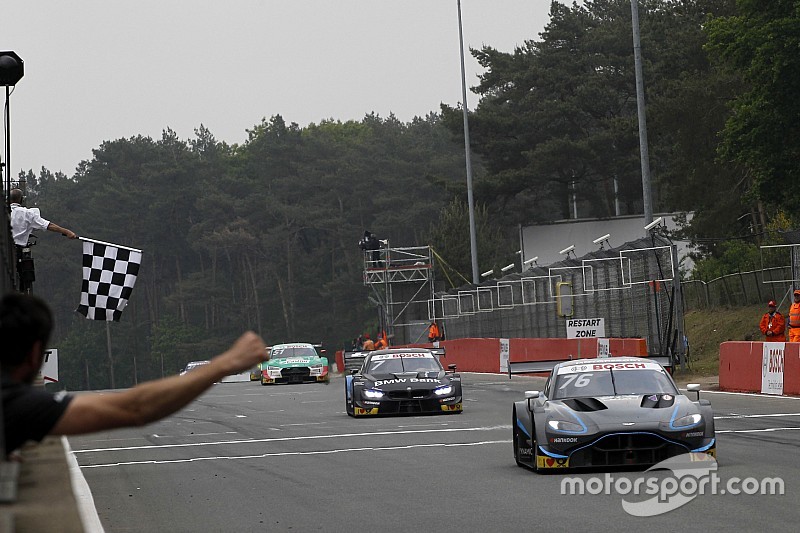 The R-Motorsport Aston Martin squad was not awarded the eight manufacturer points it earned for its best result of the 2019 DTM season in the Zolder finale.

Jake Dennis took his mandatory pitstop moments before the safety car was called on Sunday and was able to put in a battling performance to earn sixth place and eight points for R-Motorsport. The team has now confirmed to Motorsport.com that while Dennis retains his points for the drivers' standings, the points will not count in the manufacturers' standings.

It is believed that the Aston Martin squad had fallen foul of Article 28.5 in the Sporting Regulations that covers "extraordinary engine sealing", which reads: "each competitor has the right to submit a written application for a late engine sealing of engines to the Technical Delegate.

Article S 28 also covers off the fact that each manufacturer is allowed six engines over the course of a DTM season. It is believed that Paul di Resta's oil pressure loss in qualifying, which prevented him from taking part in the race, meant R-Motorsport had to open the seal of the engine and passed the six-engine allowance.

That made it three engine changes in one weekend as R-Motorsport changed Ferdinand Habsburg's and Dennis' engines overnight on Friday and Saturday respectively.

The R-Motorsport team had a late build of its Aston Martin Vantages for the 2019 season and as such has a limited supply of spare parts and this will have stressed its engine allocation. The impact of the new Class One engine on reliability has not only been a problem for R-Motorsport, but for Audi and BMW too.

The R-Motorsport roster of drivers has scored points in every round, even if Dennis's Zolder haul means its manufacturers' total is just 15. Paul di Resta secured points in each of the first three races, while Habsburg and Dennis got their first DTM points at Zolder.

Speaking after the Sunday race, Dennis told Motorsport.com: "I benefitted big from that [safety car] and gained six or seven positions, was P8 and it was a 15-minute ruthless battle, everyone was going hell for leather. Some guys were on old tyres, some on new like me.

"Trying to keep the Audis behind and trying to take Glock ahead was so difficult we got it done [for sixth]. DRS went from being my best friend, because I got Glock, to being my worst as I ran out.

"Everyone else behind me had it, we just about survived and super happy to get my first points and everyone for the team because it was a late night last night changing the engine. It was nice for the car to get P6."

The R-Motorsport squad will likely miss out on future manufacturer points over the coming season now that it has passed the seasonal allowance, as each future infringement will automatically trigger the punishment.