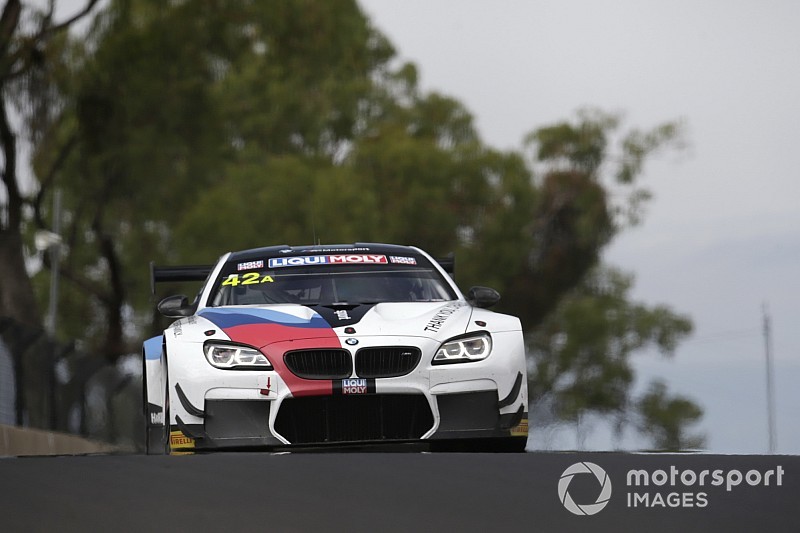 The Schnitzer BMW narrowly leads the Bathurst 12 Hour at the halfway mark over the #108 Bentley, as the lead Mercedes has been left reeling from a drive-through penalty.

The Schnitzer M6 filtered to the top as the stops shook out early in the fourth hour, Martin Tomczyk making the car's third stop on Lap 86 to hand over to Augusto Farfus.

By then the #999 Mercedes, an early leader of the race, had already gone for a shorter third stint and made its second stop, while both Bentleys stopped together on Lap 89.

That put the #77 Mercedes, which hit the three-hour mark in control, back in front, but only until a Lap 99 stop right on the four-hour mark.

Farfus, who had worked his way back to second, then moved back into the lead. However it wasn't overly comfortable, Matsuda Tsugio in the #35 KCMG Nissan glued to the back of the M6.

On Lap 105 the lead changed hands for the first time on track, Matsuda barging by Farfus on the run up Mountain Straight.

By Lap 107 Farfus was back in front, Matsuda pitting the Nissan and handing over to Josh Burdon.

As the race reached the 4.5-hour mark the #22 Audi's hopes took a hit when Garth Tander piled into the back of Christina Nielsen's #19 Mercedes. The Dane had just come out of the pits, Tander caught out by the slow moving AMG through the tight confines of The Cutting.

He had been running fifth, but was forced into the pits in Lap 114 for running repairs to the front bodywork, losing six laps in the process.

There were dramas for the #35 shortly afterwards, the Nissan rolling to a stop on Mountain Straight as it began Lap 120. It got going again, but would end up in the garage by Lap 128.

Meanwhile the fourth Safety Car of the day arrived thanks to debris on Lap 121. Farfus dived straight into the pits, making his fourth service and holding onto his lead.

The #999 Mercedes did likewise, Max Buhk back in that car, while Christopher Mies opted not to stop, which put the #2 Audi into third.

Farfus led Buhk and Mies on the Lap 124 restart, the trio inseparable for the next 10 laps. Dennis hung on to the lead pack in the R-Motorsport Aston Martin as well, while Maxime Soulet was less then three seconds behind the leader in the #108 Bentley.

Safety Car number five arrived on Lap 140 when Class B driver Danny Stutterd clobbered the wall, Farfus, Buhk and the two Bentleys staying out while Mies and Dennis both made their fifth stops.

There was plenty of drama on the Lap 143 restart, starting with the #107 Bentley peeling into the pits right as the race was about to go green for a suspected puncture.

Farfus and Buhk then staged a door-bashing battle up Mountain Straight, the BMW ultimately holding onto the lead.

It was all in vain anyway, Buhk stung for weaving behind the Safety Car and hit with a drive-through penalty a lap later. He emerged down in 10th.

Even before taking the penalty Buhk lost second place to Soulet in the #108 Bentley, who immediately put the blow torch to the back of the BMW.

Soulet did nose ahead briefly as the pair battled, however as the race hit the six-hour mark it was still Farfus with the very narrow advantage over the Bentley, while Dennis was 3s behind in third.

The leading Pro-Am car is currently the #75 SunEnergy1 Mercedes. The Grove Motorsport Porsche still has a firm grip on Class B, the #21 MARC V8 leads the Invitational class with Anton de Pasquale at the wheel, and the #48 M Motorsport KTM leads Class C.

You can watch the Bathurst 12 Hour live and free with Motorsport.TV.