The team was leading the race when it was handed a four-minute stop/go penalty for a pit infringement during a Code 60 period that involved a Barwell mechanic and the car-controller for the neighbouring MRS GT-Racing Porsche.

In footage widely shared on social media, the mechanic can be seen pushing the car controller, who then fell against the Porsche and was stuck by its rear wing. He suffered a dislocated shoulder in the incident.

Lemmer expressed his best wishes to the injured team member and said that the part-time Barwell contractor, an "experienced GT mechanic", was "mortified" at the incident.

"It's a deeply regrettable incident, we're all very relieved that the guy wasn't more seriously injured," Lemmer told Motorsport.com. "We've been in contact with the MRS team checking on his well-being.

"We take safety extremely seriously, we do safety briefings every day with our crew and we have all of our guys wearing helmets in the pitlane [the MRS team member was not], regardless of whether that's mandatory or not, which it's not in Creventic [championships]. That is something we have discussed and recommended to the organisers [is addressed].

"It's one that we feel very strongly about because the pitlane is inherently dangerous and the more you can protect those guys, the better."

Creventic events feature pitstops against the clock, which is rare among GT3 series, and grids are typically larger than average. There were 65 cars entered for the Dubai event, with some pitboxes being shared by three teams.

A paddock insider with experience of car-controlling, who wished to remain anonymous, told Motorsport.com that the MRS car-controller had put himself in a compromised position by encroaching into the Barwell pit area.

"From a car controlling point of view, it was a huge failure on the part of the guy who got hit to firstly not read the situation, secondly position himself appropriately to what was about to occur and finally have no spatial awareness of what was going on," he said. "As he's releasing the car, his sole focus is looking at his driver, not at what's going on around him at that point. I wouldn't have put myself in that location in the first place."

The unnamed source added: "You are not required to wear helmets but all the top-end GT3 teams do. The regs even state repairs should be carried out in the pitlane, which is a bit nuts."

The event was won by the Black Falcon Mercedes of Jeroen Bleekemolen, Manuel Metzger, Khaled Al Qubaisi, Hubert Haupt and Ben Barker. The race was shortened to seven hours due to heavy rainstorms that flooded the track. 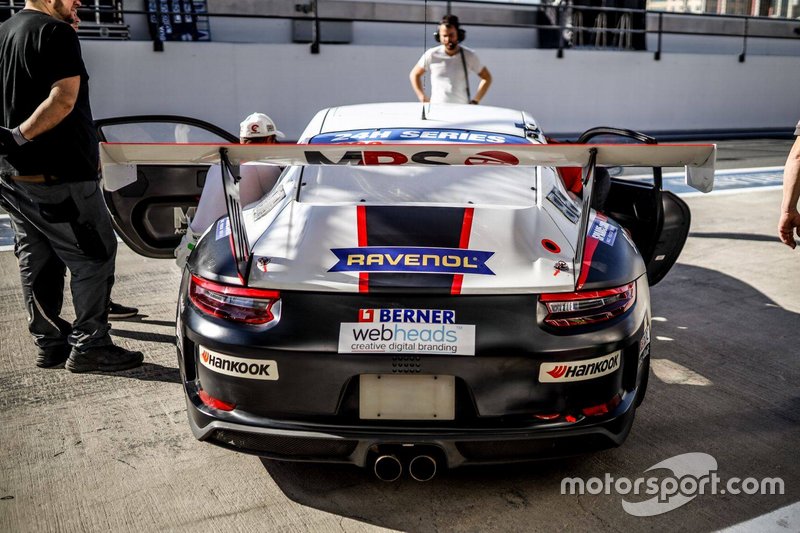