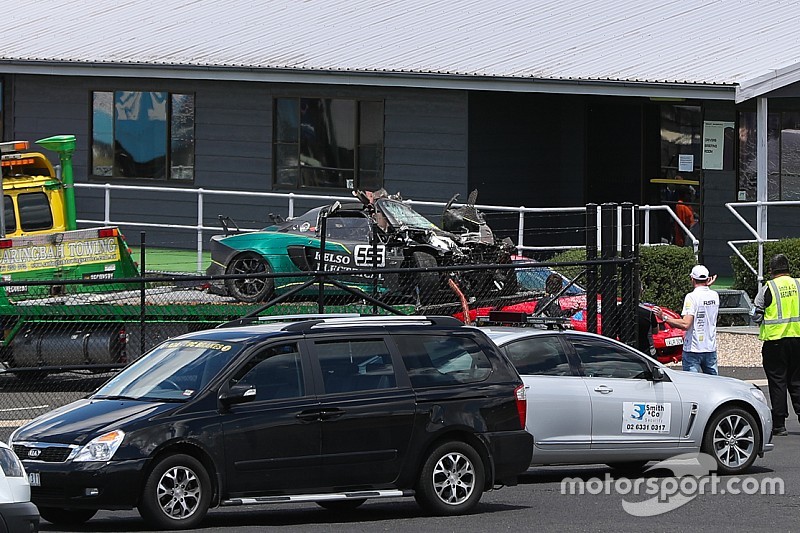 A local Lotus driver was lucky to walk away from a 44G shunt at last weekend's Challenge Bathurst sprint event.

Brad Schumacher crashed into the wall at the end of Mountain Straight after his Lotus GT racer suffered a mechanical failure, leaving the road at over 230 km/h.

The impact with the wall measured 44G, Schumacher lucky to walk away with minor injuries limited to a torn ligament in his knee and bruising.

“I’ve hit the wall on the right and from there the car has actually gone airborne and done a complete flip through the air across the entire circuit. It’s actually hit the wall at the outside of the turn airborne, that’s where it has come to a rest,” Schumacher told local paper The Western Advocate.

“I can imagine it must have looked horrendous and that explains why, when I actually got myself out of the car on my own two feet and I looked over at the marshals who were all standing at the marshal point, I gave them the thumbs up and they honestly looked like they were deer in headlights. They were just literally gobsmacked looking at me.

“I’m very lucky, I’ve certainly been given a second chance at life I think.

“The technician has got the data out of the car now and my body would have taken on the force of 44Gs on impact.

“That’s 44 times your body weight, so for me that's around 3,600 kilos. I stayed conscious, so I guess I can now become an astronaut if I need to.

“I think that crash has certainly got to be up there with the biggest crashes there have ever been at Bathurst.

“Once I saw the damage to the wall, that was something that really hit home with me. The wall is actually broken, the Lotus is just under 1,000 kilos and it's broken the wall... the marks will be there for some time.

“I guess it’s just something that's happened and you’ve got to be thankful to walk away from an incident like that."

According to the Advocate report the crash has scuppered Schumacher's plans to field the car at the Bathurst 12 Hour last year, however he's working with Lotus in the UK on sourcing a new car for the Australian GT round at the Australian Grand Prix next March.