The changes that ensure the Williams is legal

The Williams Formula 1 team has updated its FW42 ahead of the Australian Grand Prix following concerns over illegality, also adding a new T-wing element at the rear.

Williams had previously been asked to change its front suspension and mirrors by the FIA, which had deemed them unsuitable to meet the regulations.

In particular, the suspension geometry featured a seventh member mounted aft of the lower wishbone – but this was in direct contravention of Article 10.3.5 of the technical regulations, which permit only six members per suspension upright.

Furthermore, the mirrors have now been changed into a more conventional affair, ditching the previous curved design which had been shaped to maximise outwash.

The mirror still uses a shroud, but creates a uniform box around the perimeter of the mirror itself - similar in design to that run by Toro Rosso this season.

With this design, Williams is still trying to derive some degree of performance from the mirror, albeit not to the extent of the previous design. 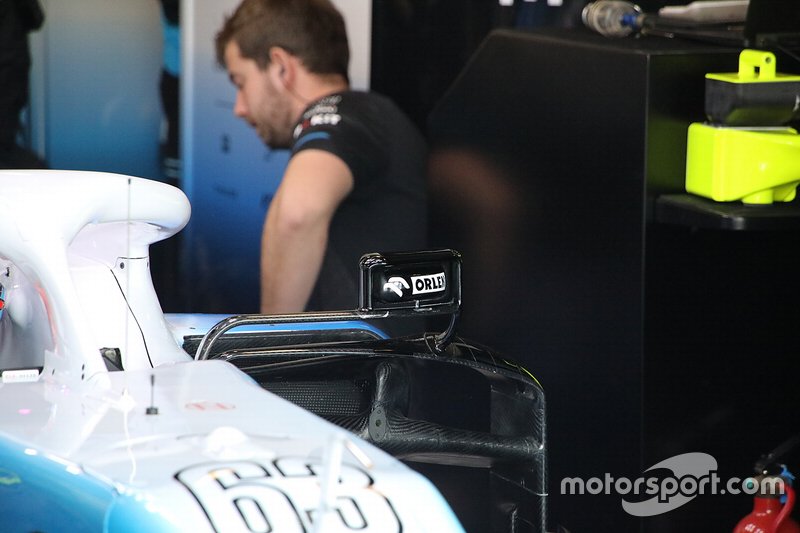 In addition to the enforced updates, Williams has also emerged in Australia with a new T-wing design to boost performance at the back of the car.

The wing has two mounting points at the trailing edge of the engine cover fin – the bottom mounting attached to a small extension of this.

The middle section is angled downwards, improving the flow transition over the exhaust section; although this will generate a small degree of lift, the circulating airflow coming out of the exhaust can be directed downwards at the rear crash structure ‘flick’.

Moving outboard, the T-wings twist into a cambered profile which will generate a small degree of downforce. The tips droop downwards, developing tighter and more compact tip vortices to minimise drag.

These vortices can then be used to boost the suction surface of the rear wing, developing a stronger low pressure field at the underside.