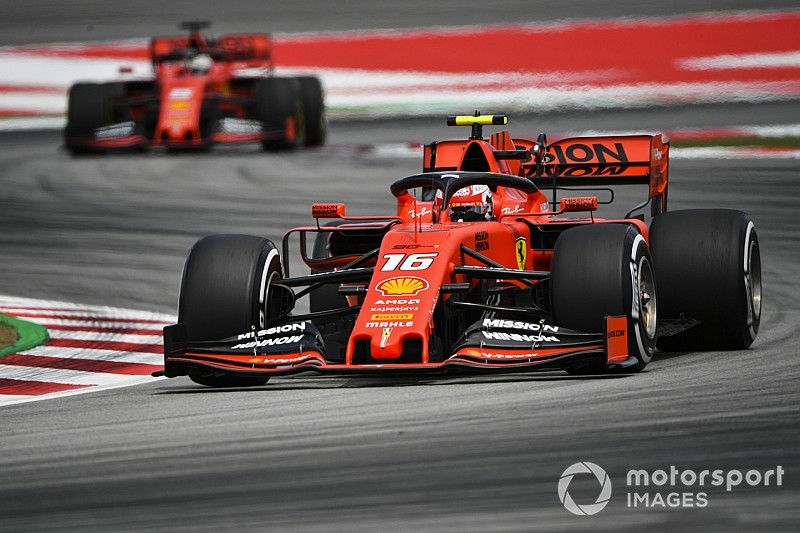 Ferrari's early upgrades and quicker introduction of a new-specification Formula 1 engine are a legacy of it deciding to "shortcut" its development programme after the very first race.

After topping pre-season testing at Barcelona, Ferrari was comfortably defeated in Melbourne and is on the back foot against Mercedes after the first four grands prix.

Ferrari brought its first aerodynamic upgrade of the season to the last race in Azerbaijan and has brought more new parts to Spain this week, as well as an updated engine that was originally planned for Canada in two races' time.

Team principal Mattia Binotto explained: "Obviously when you are planning such a change on your schedule you need to do it a few weeks ago. It's not something we decided within that week.

"Having started the season in Melbourne, we recognised that we may have been late on our performance compared with our competitors. We tried to push on all the main items where we were already planning developments.

"We were looking for opportunities in anticipating some of the programmes. We did it already with an aero package in Baku which was introduced earlier compared to our initial programme. We did it here as well for the power unit.

"You achieve that by trying sometimes to shortcut or intensify the activity. I have to say that the people back at Maranello have worked very hard, and we are working still very hard."

Each driver is restricted to a certain number of engine components over the season.

They will get a grid penalty if they exceed three of the internal combustion engine, MGU-H and turbocharger, or two of the MGU-K, control electronics and energy store.

Asked by Motorsport.com if that would force Ferrari into a fourth engine at the end of the year, Binotto said he did not anticipate needing grid penalties.

"No, that's not the plan," he said. "The early introduction doesn't mean that we cannot still use [the first engine] in some races.

"Maybe that can be an option – but certainly we are not hoping to have a four engines per season, per driver plan."

Ferrari's return to the scene of its strong testing form has triggered questions over why it slipped in competitiveness once the season began.

However, Binotto said his team "never dropped away" because people underestimated how strong Mercedes was by the end of testing.

"We already mentioned that they would have been very strong as well," he said. "Since then we both developed our car. Coming here it's certainly not any more the same car we had at the time.

"The weather conditions are completely different, the heat is certainly a different factor. So, are you exactly on the same page [as in testing]? I don't think you can compare."