Join us as we delve into the latest technical developments from the French Grand Prix at Paul Ricard, courtesy of Giorgio Piola and Sutton Images. 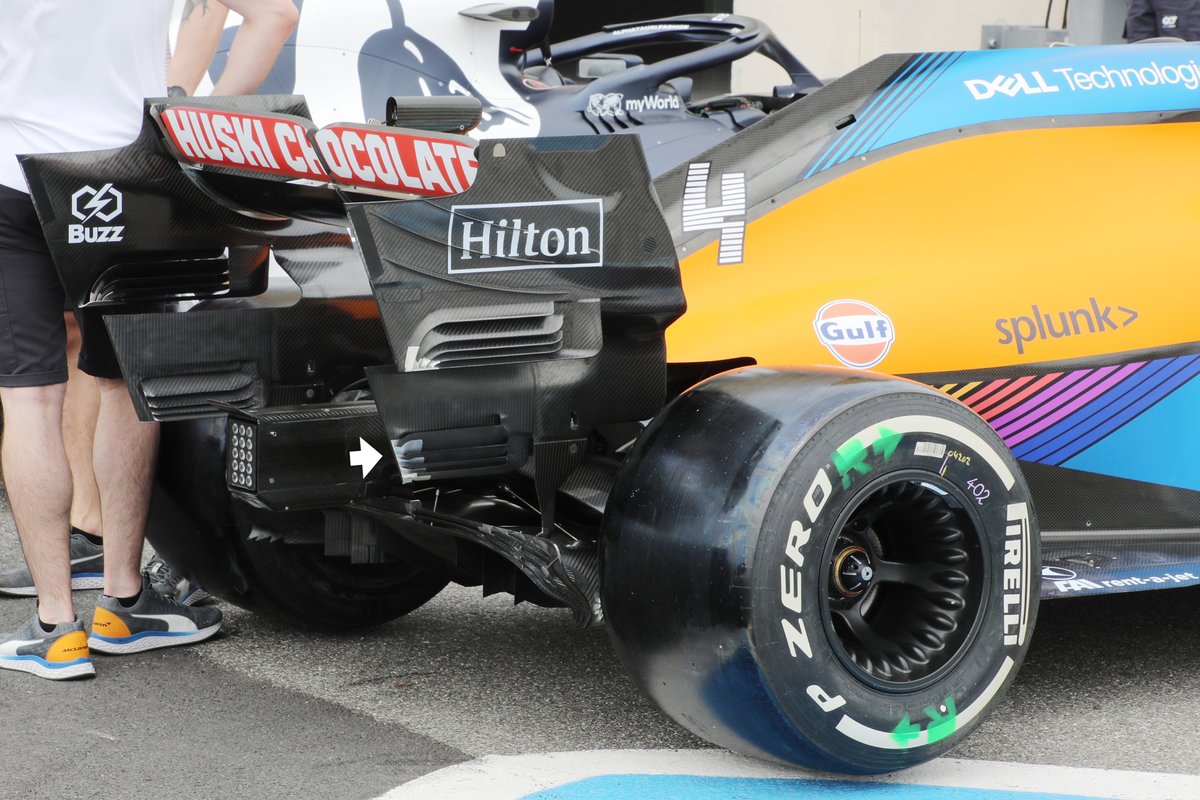 1/29
A new rear wing endplate for McLaren in France that features a series of horizontal louvres where ordinarily we’d find vertical strakes. 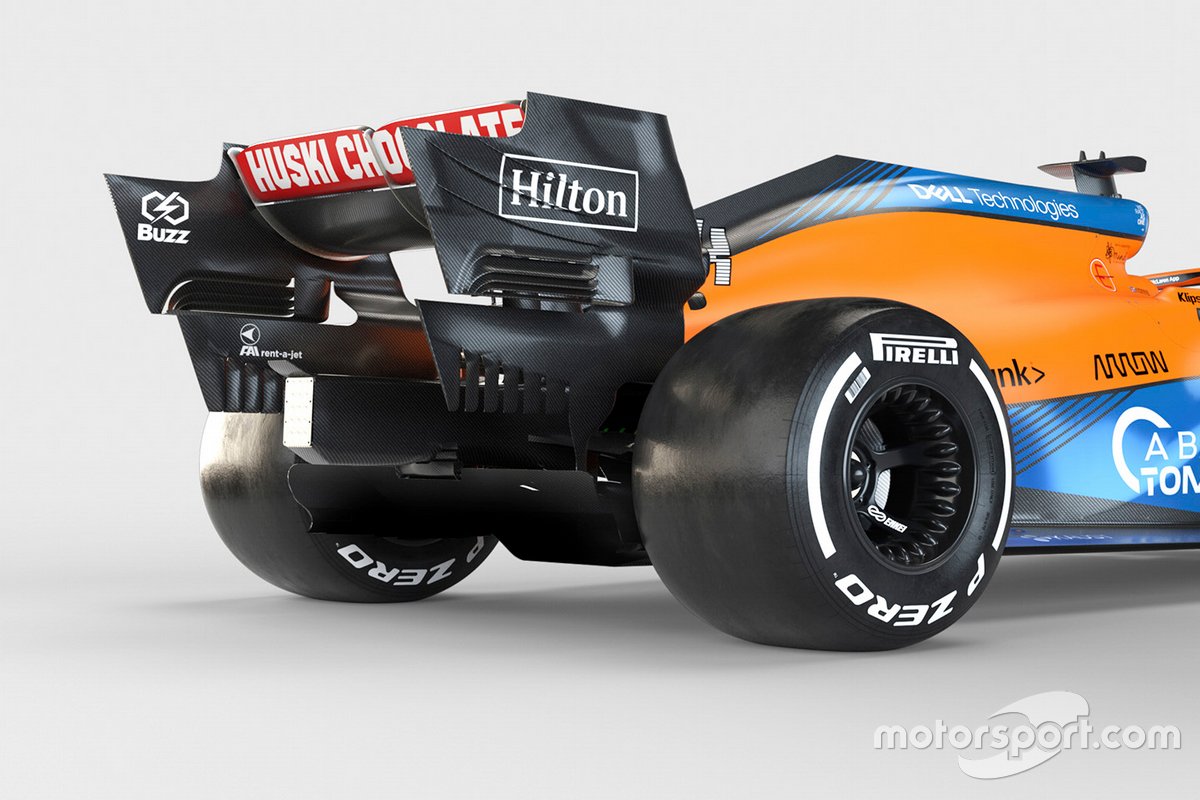 2/29
For comparison the vertical strakes usually found on the McLaren MCL35M’s lower section of the rear wing endplate can be seen here in the launch images. 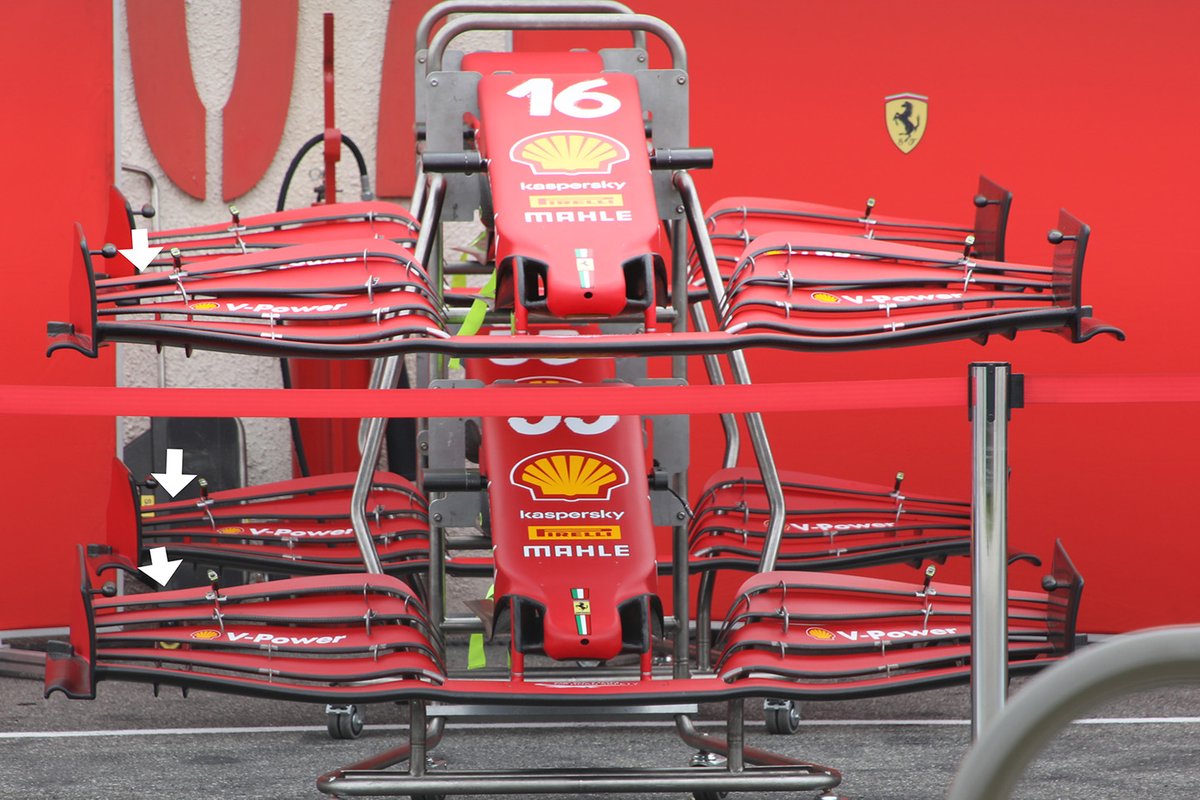 3/29
Ferrari has a couple of front wing configurations available to it for the French Grand Prix, with the revised version at the top sporting a different footplate and a difference in the ratio of the flap section that can be adjusted (white arrows). 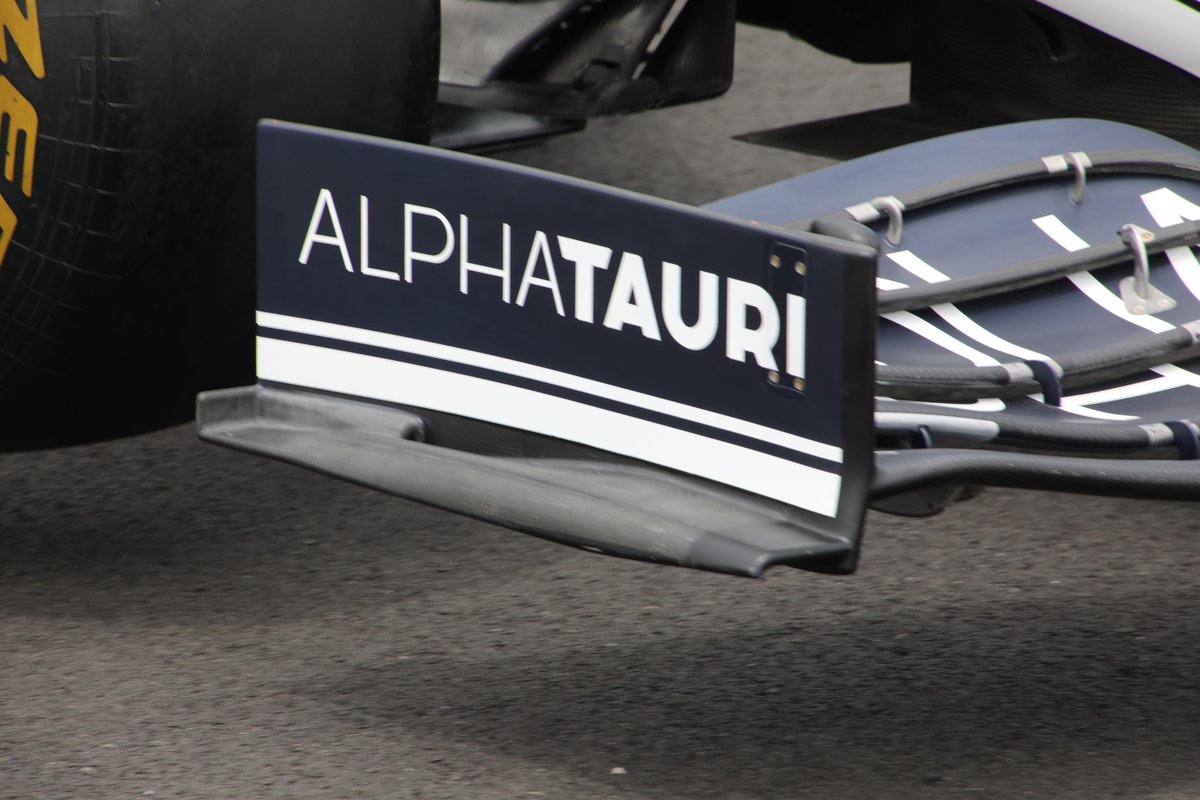 4/29
It’s not an entirely new concept but still worth a look close up given AlphaTauri has two versions available in France. The front wing footplate has a cavity that encourages air to move from the upper surface to the underside of the wing through a hole. 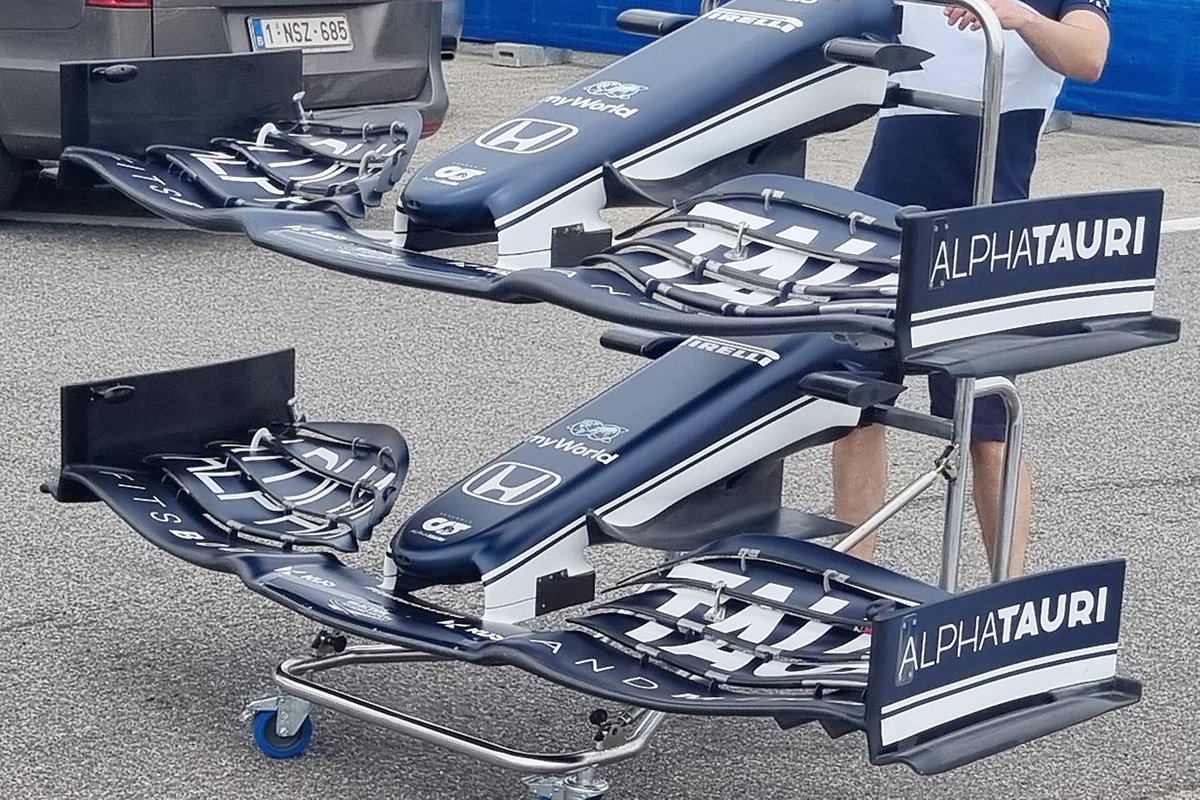 5/29
The two versions of the AlphaTauri front wing which not only have a different cavity that encourages the airflow to move to the underside of the wing, the overall shape of the footplate is different too, with one using the classic arc and the other a squared version. 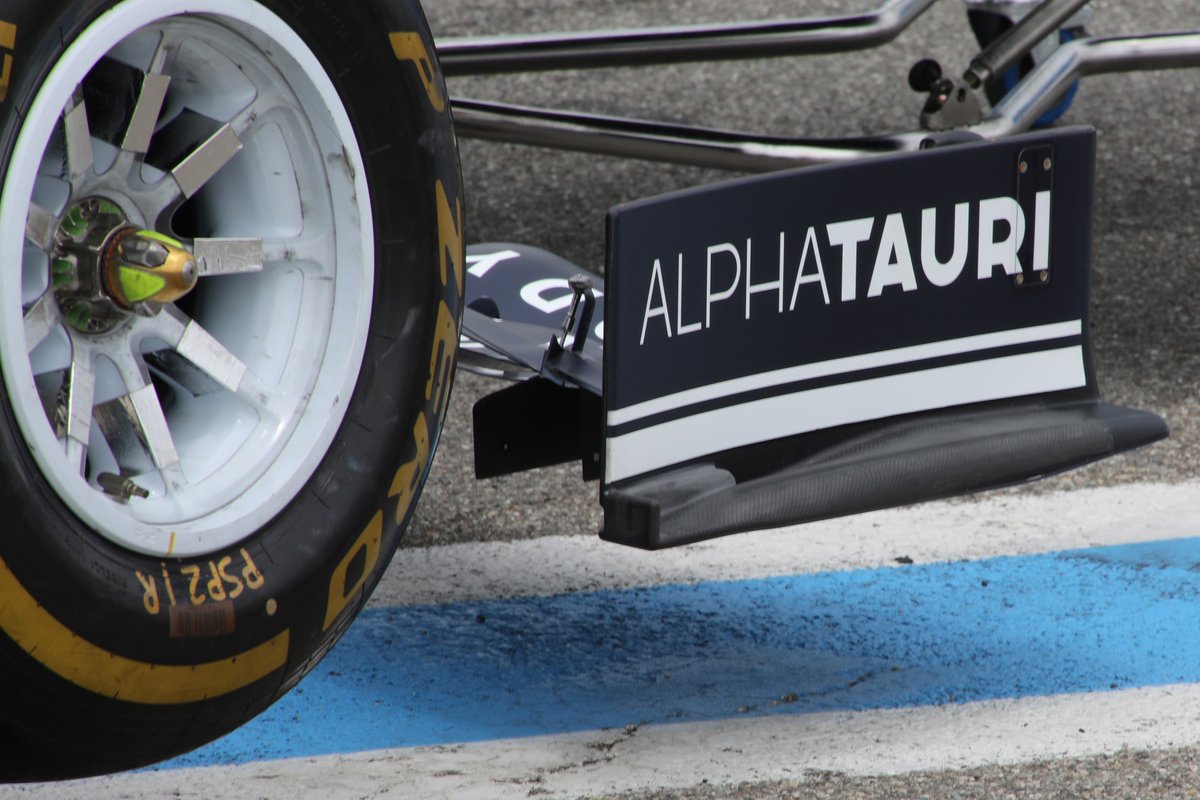 6/29
The view from behind the AlphaTauri front wing shows off the curvature of the footplate. 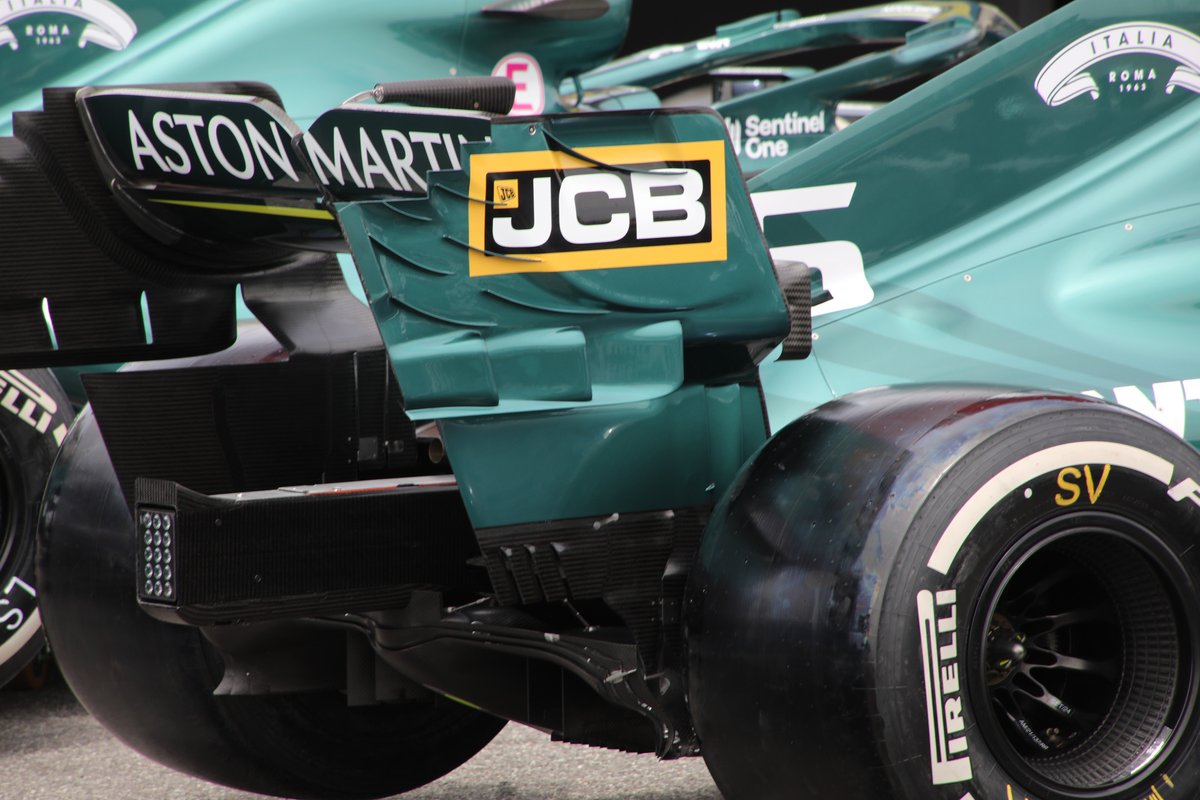 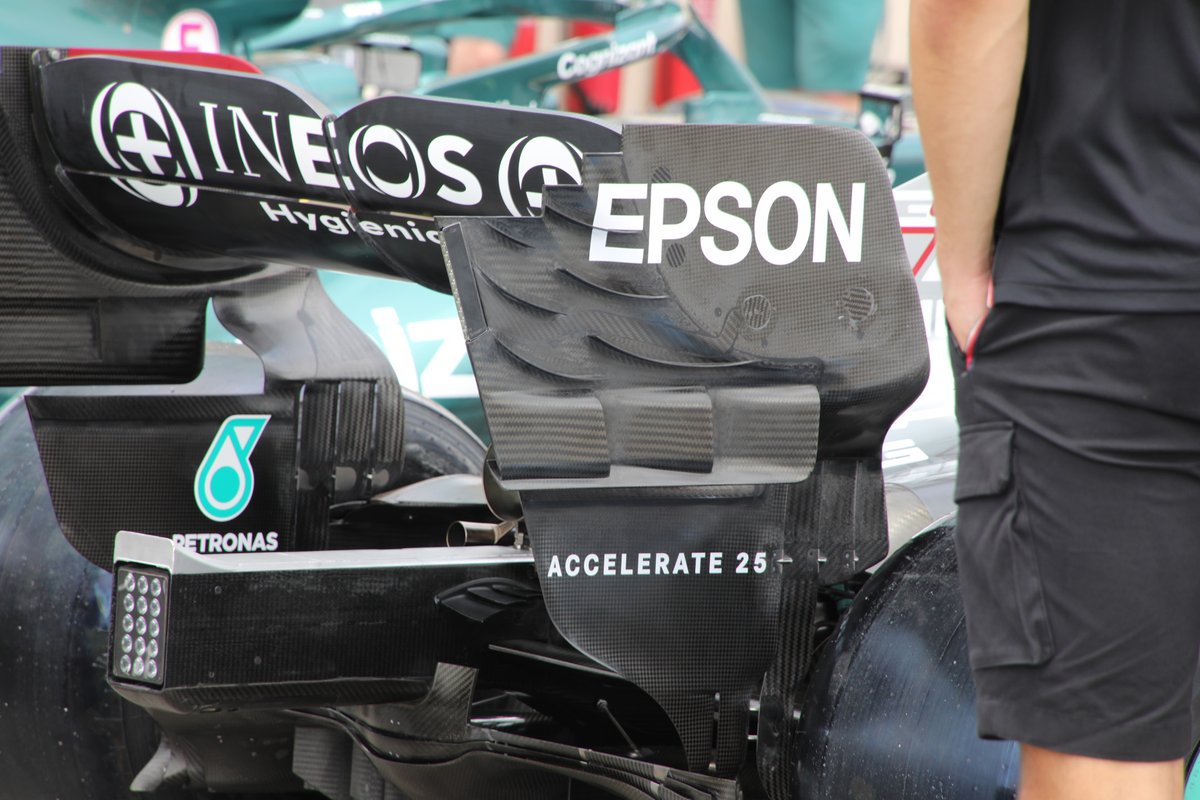 8/29
The Mercedes W12 rear wing endplate by comparison is obviously very similar but note the difference in the lower strake arrangement. 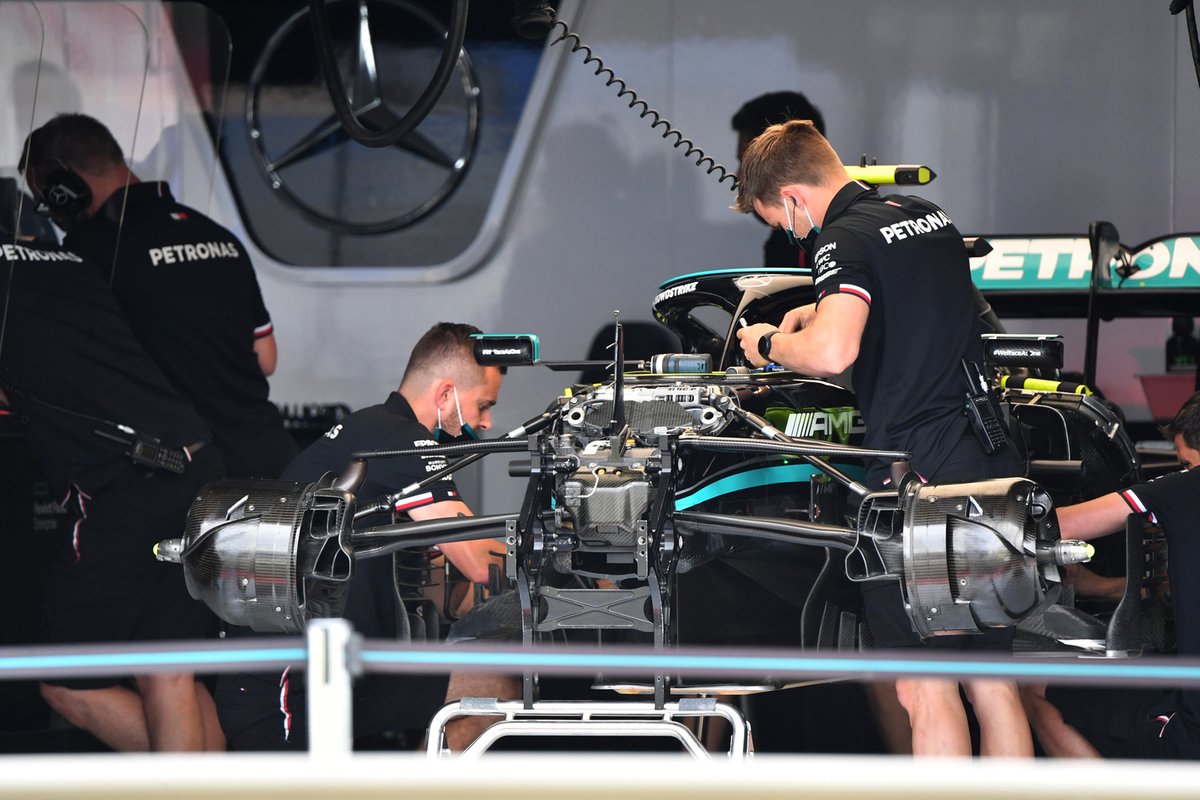 9/29
Mercedes prepare its cars for the French Grand Prix - note the brake drum design which features a trench that allows more airflow to flow between the drum and wheel rim. 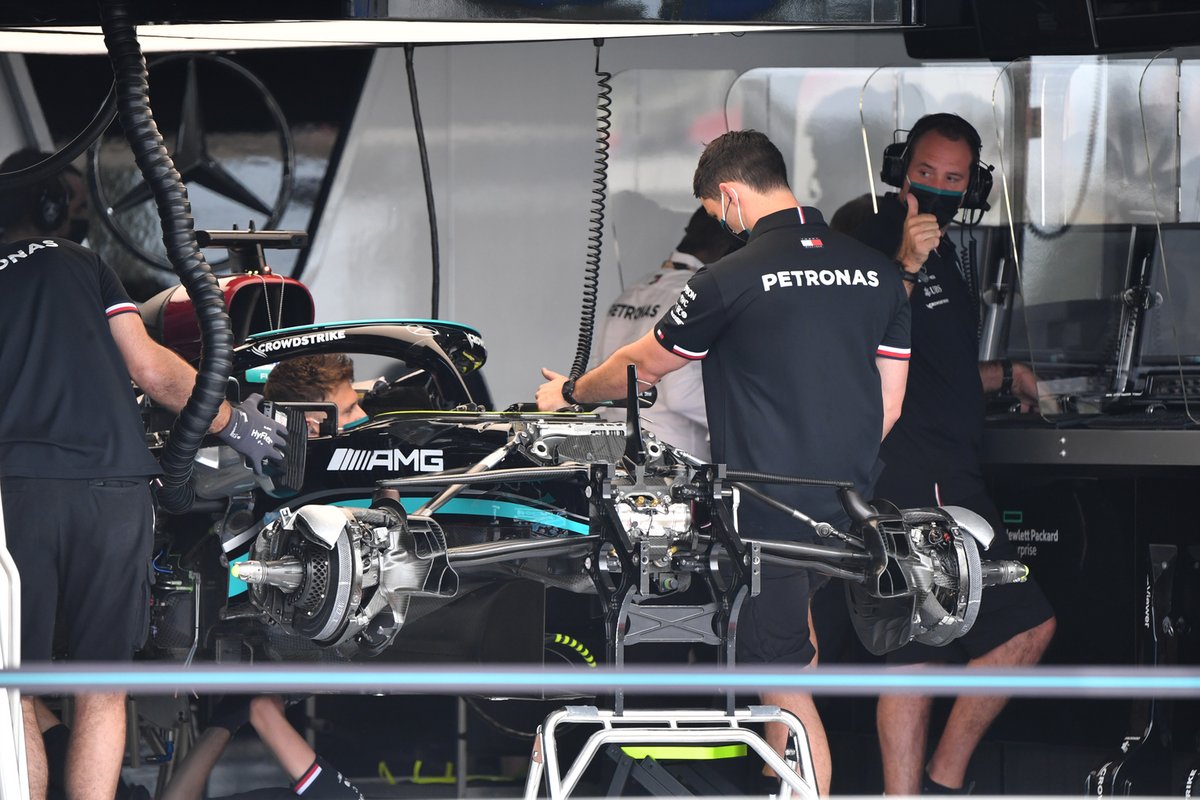 10/29
The brake assembly before the drum is put in position, note the silver ductwork that carries airflow from the inlet to the outer face to assist aerodynamically. 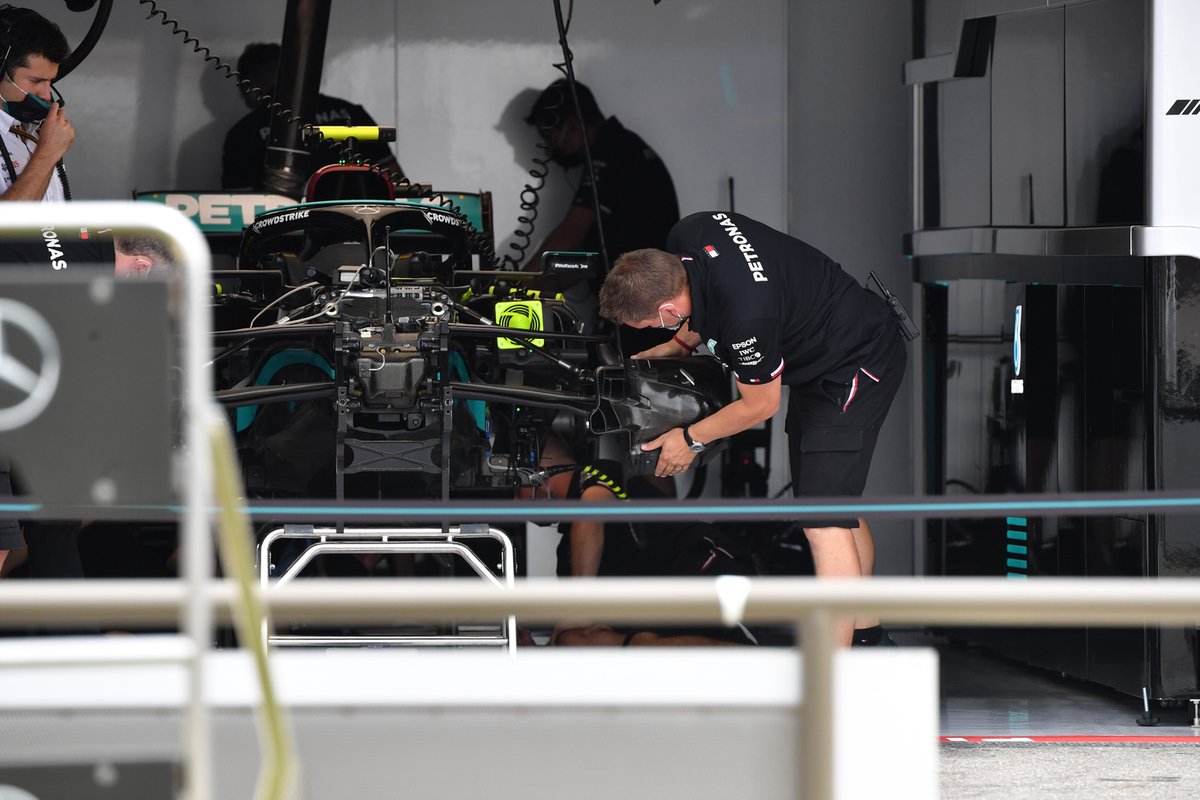 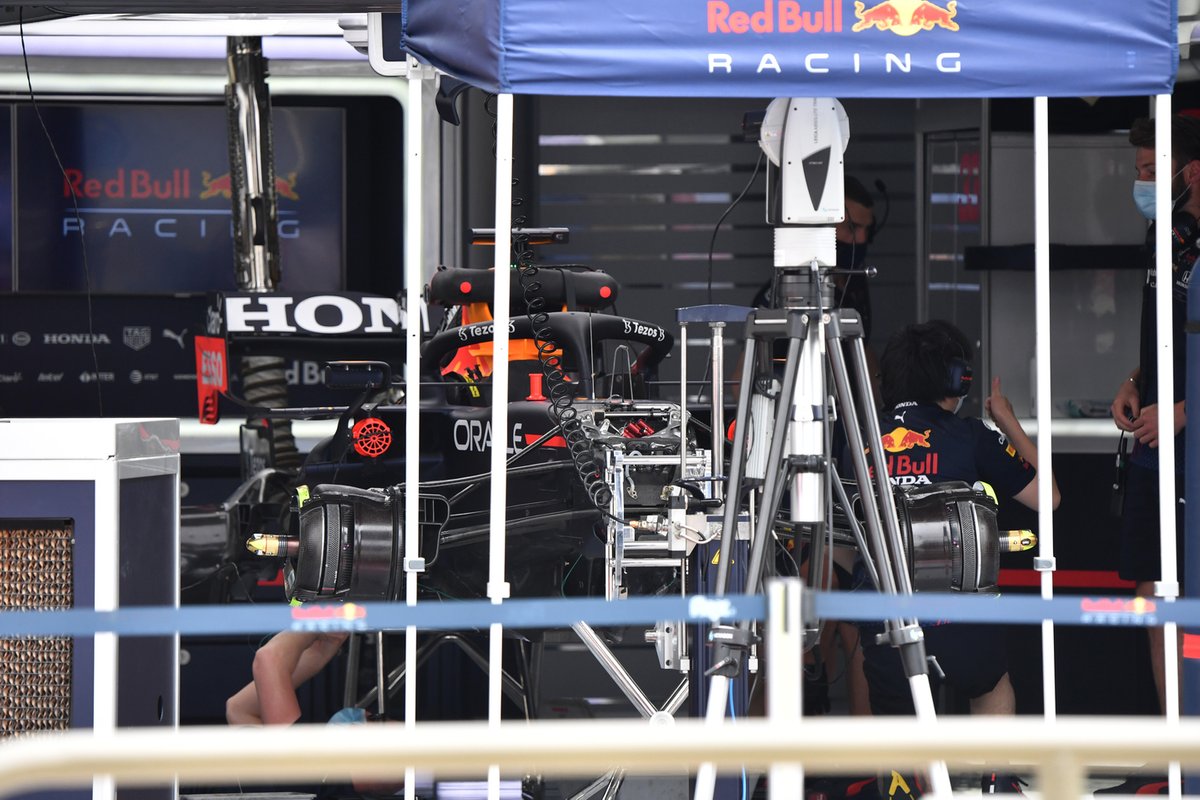 12/29
As a comparison note., how Red Bull has its brake disc exposed, which will alter how the temperature generated by the brake disc acts on the wheel rim and consequently the tyres. 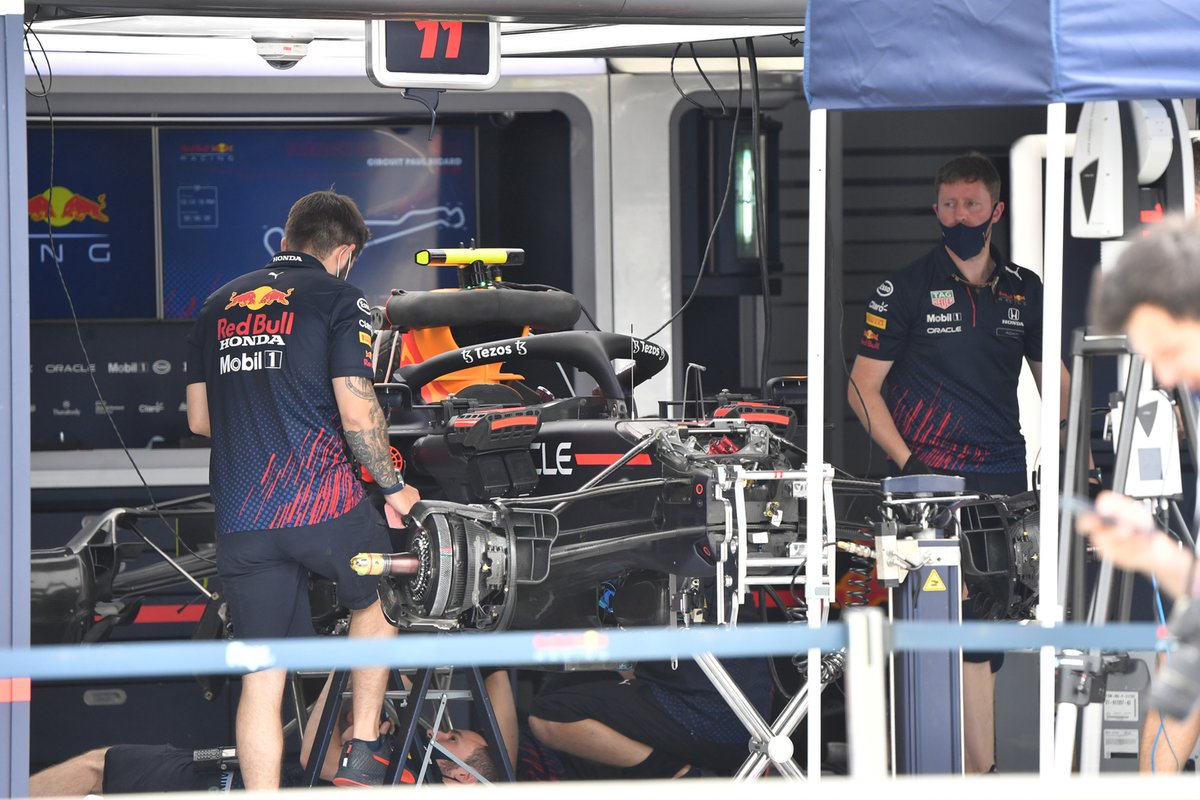 13/29
A shot of the RB16B’s brake assembly prior to the brake drum being attached shows how the pipework will carry airflow from the inlet through the assembly. 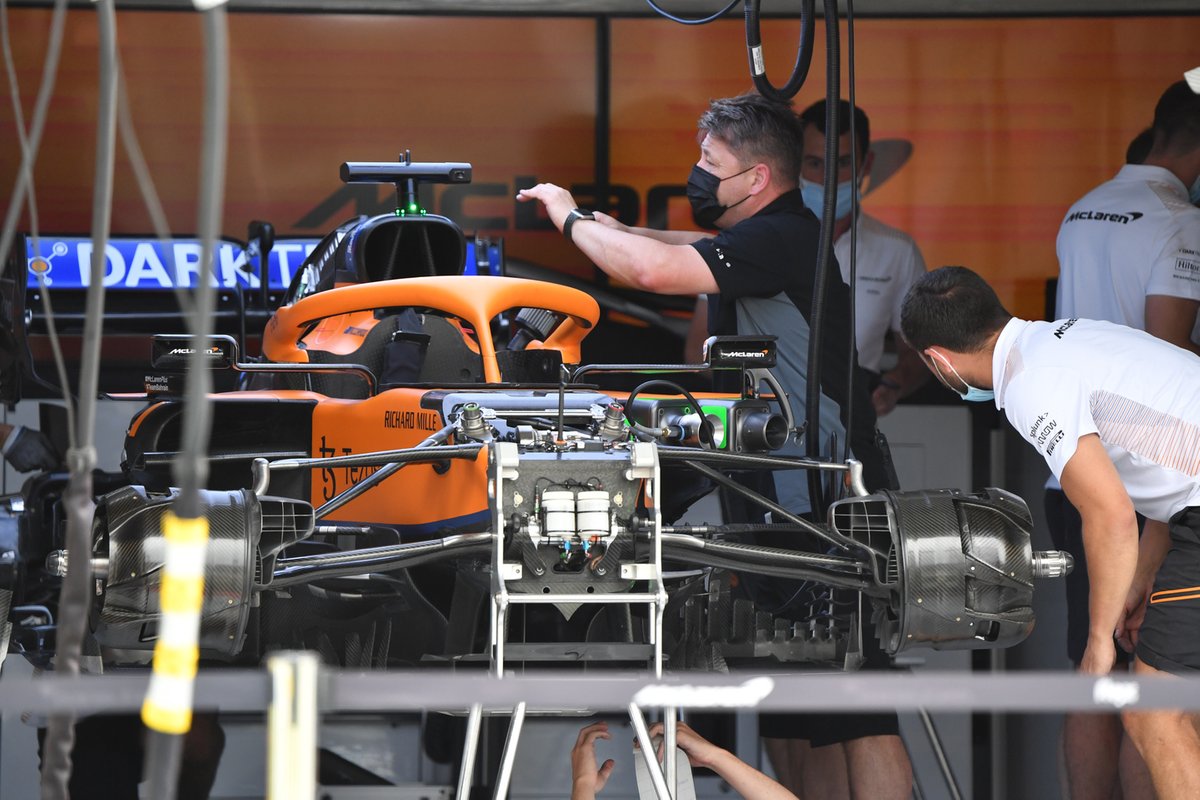 14/29
The McLaren MCL35M’s front brake drum bypass pipework is slightly different, as it’s split into two channels to alter how the airflow behaves. 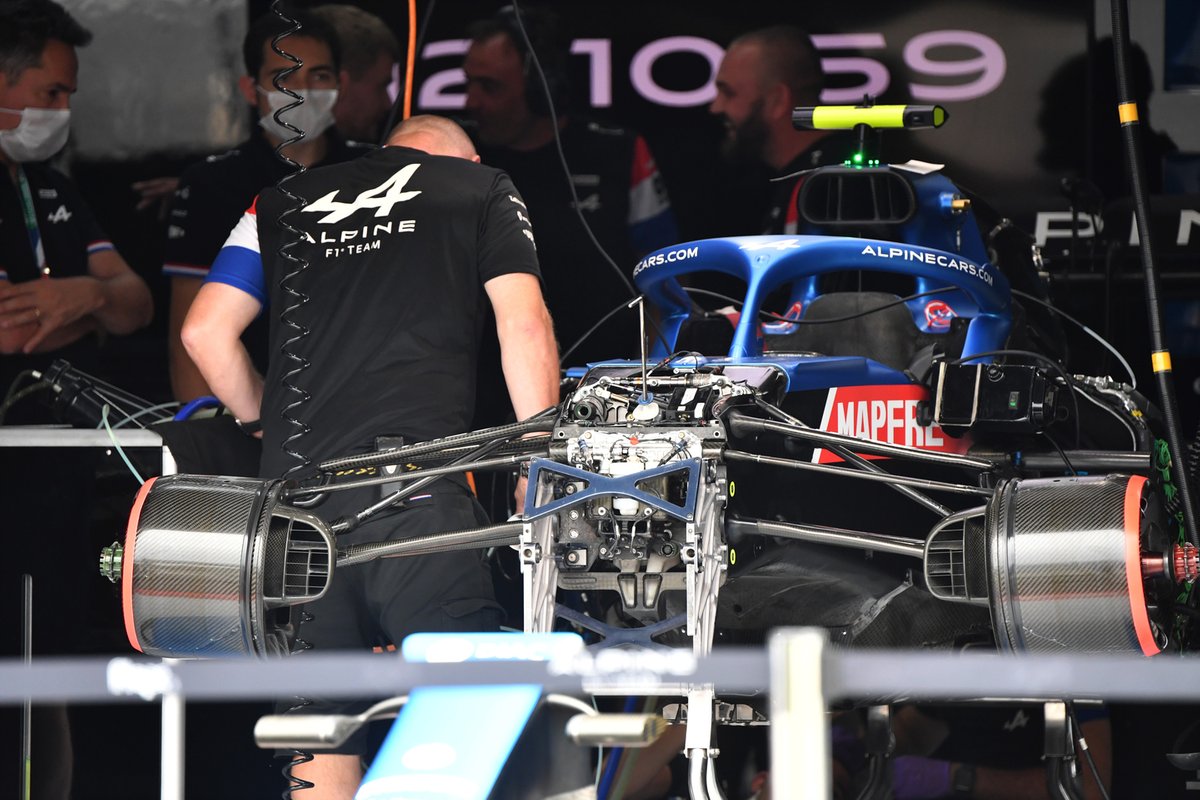 15/29
Alpine in comparison is doing all of its aerodynamic work under the covers of its drum. 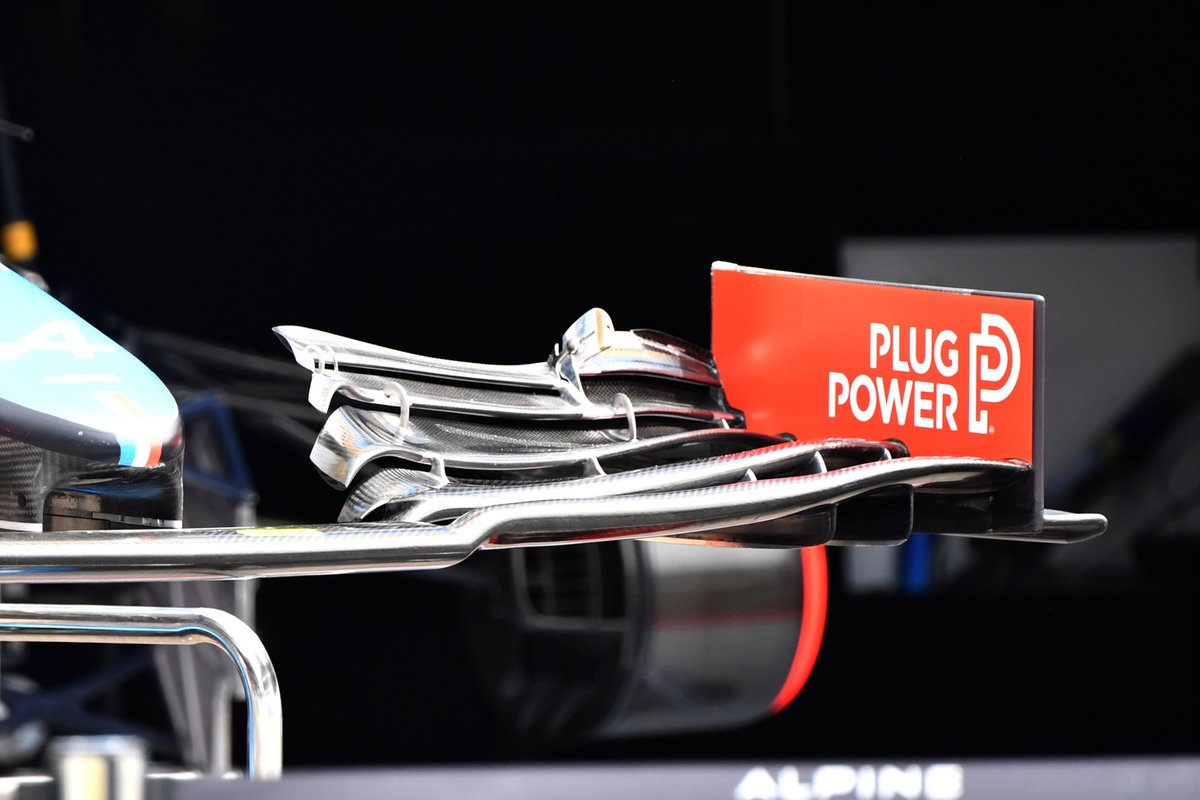 16/29
A great close up of the Alpine A521’s front wing - note the higher angle of attack on the wing in the outer section, whilst the flap tips have been stunted / squared off. 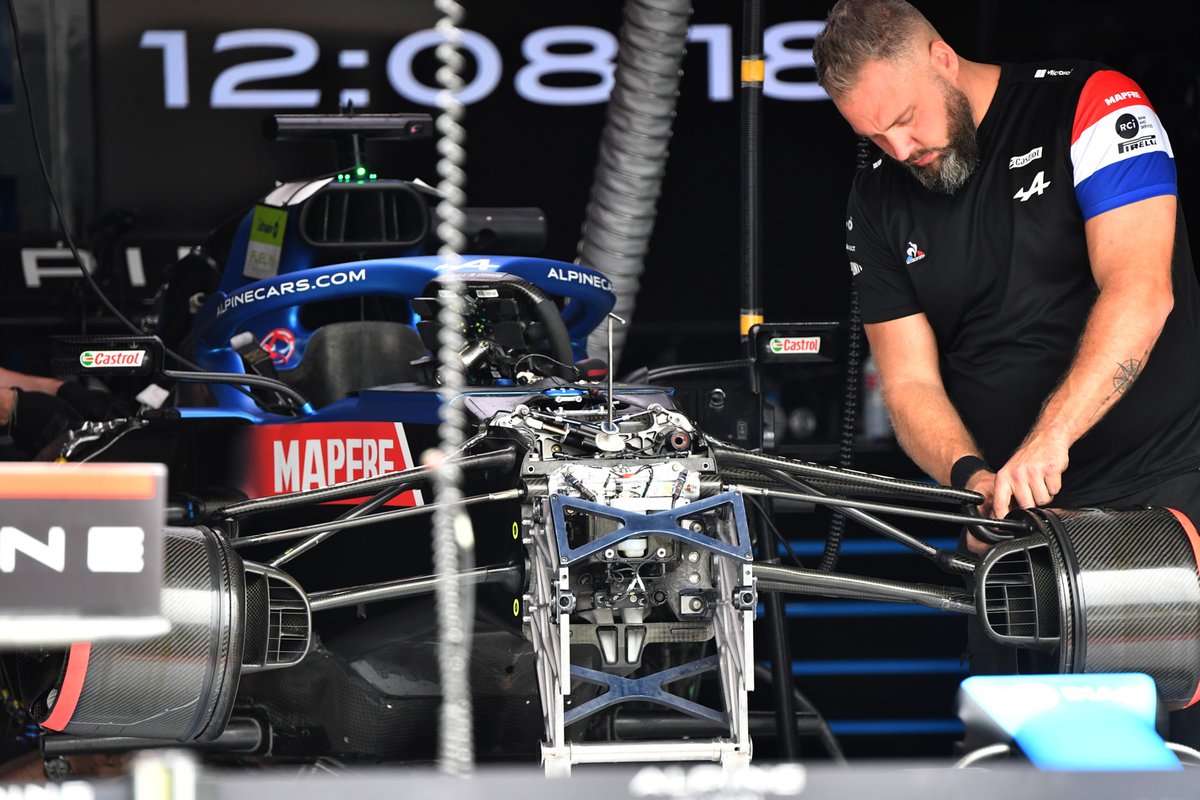 17/29
A nice overview of the Alpine A521’s front end, especially the inboard suspension elements that are visible. 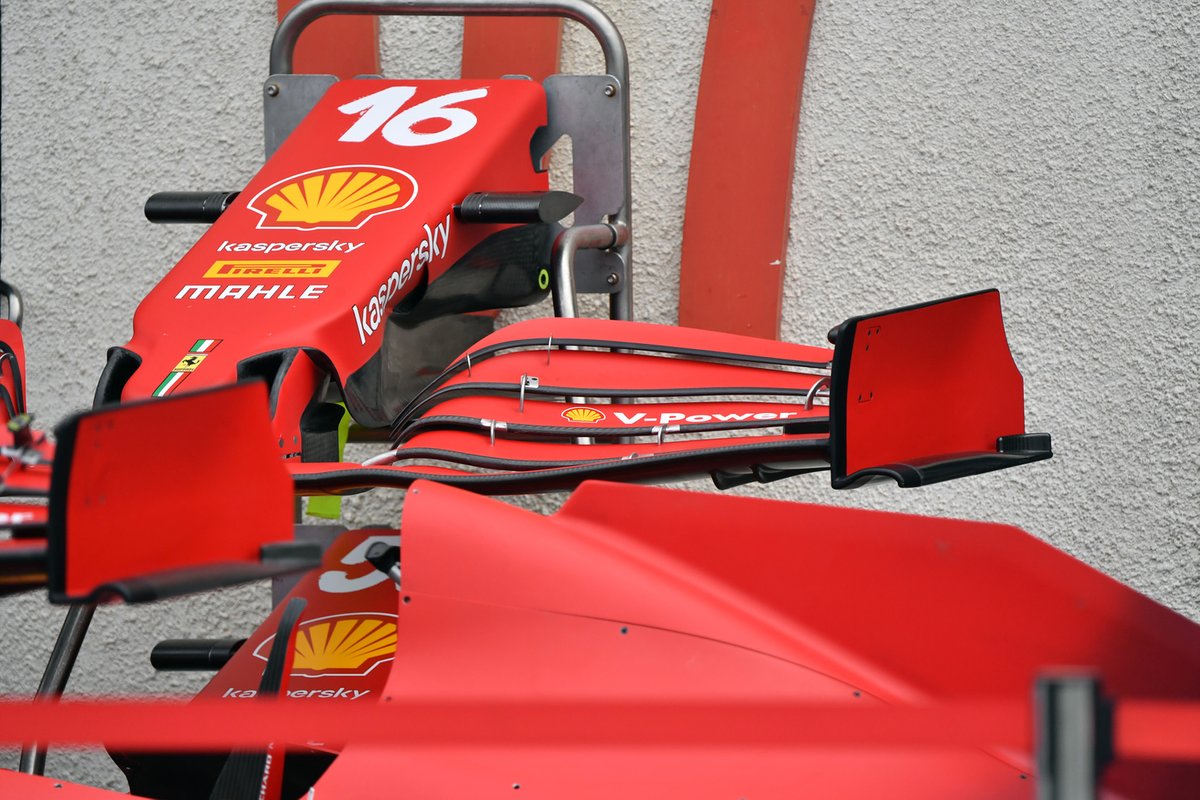 18/29
Another angle on the revised front wing that Ferrari has available in France, note the wider footplate arc, revised strakes beneath the wing and the ratio of wing that will move when the adjuster is used. 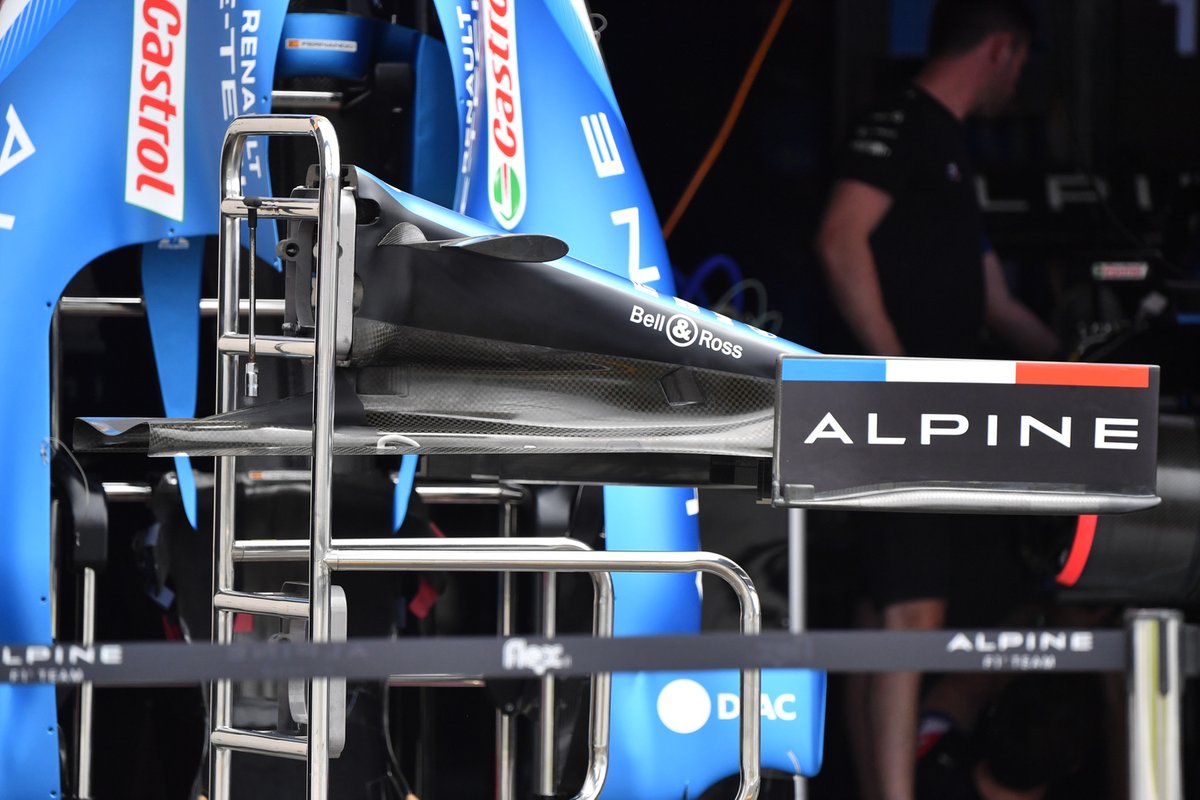 19/29
An interesting view of the Alpine A521’s cape, showing the curvature at the trailing edge. 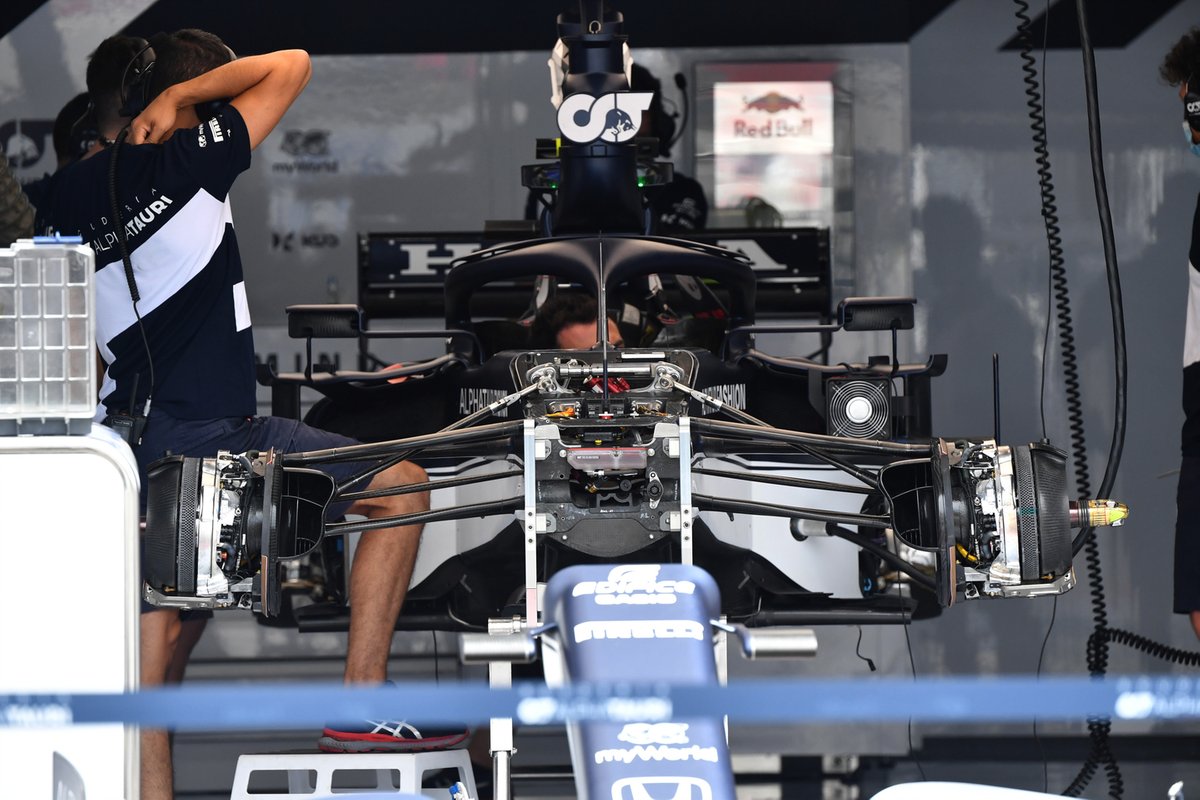 20/29
An overview of the AlphaTauri AT02’s front end before the brake drums are added, also note the cutout in the face of the bulkhead where the steering assembly used to sit prior to it taking last year's Red Bull variant that’s placed further back. 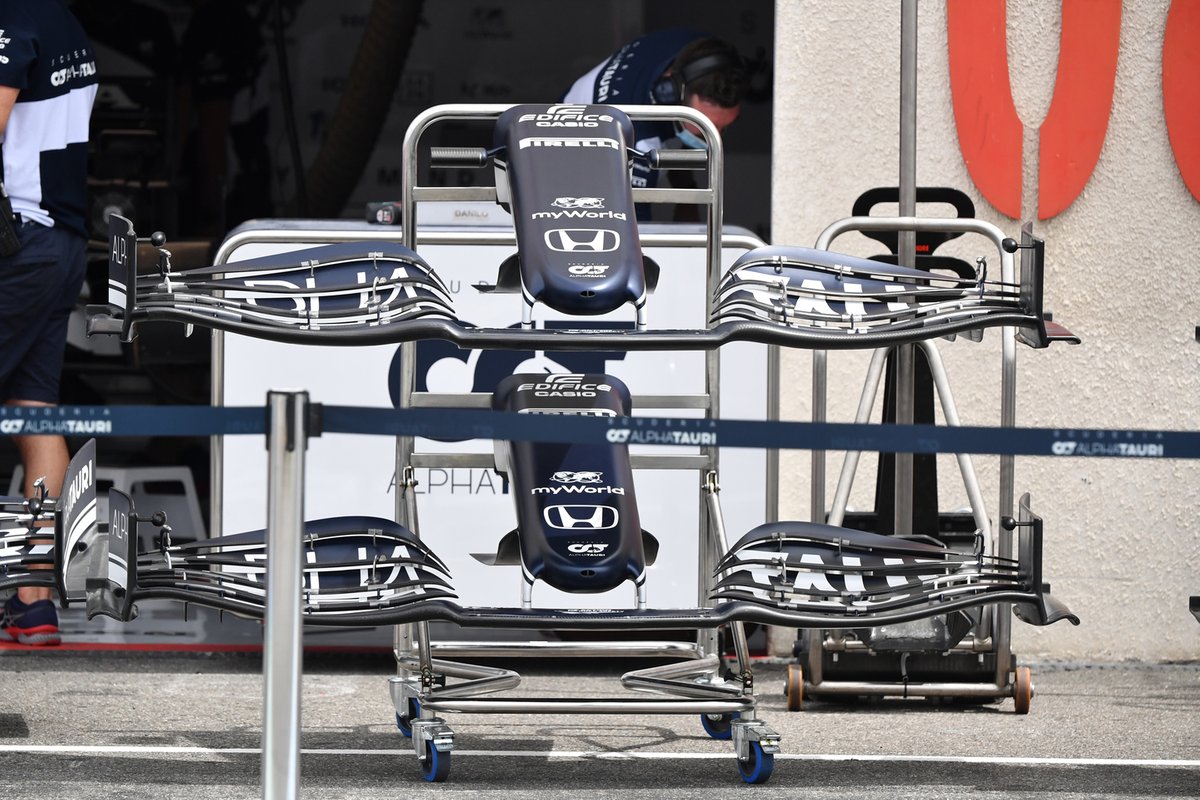 21/29
The two front wing specifications available to AlphaTauri - note the difference in the flap design as well as the different footplate shapes. 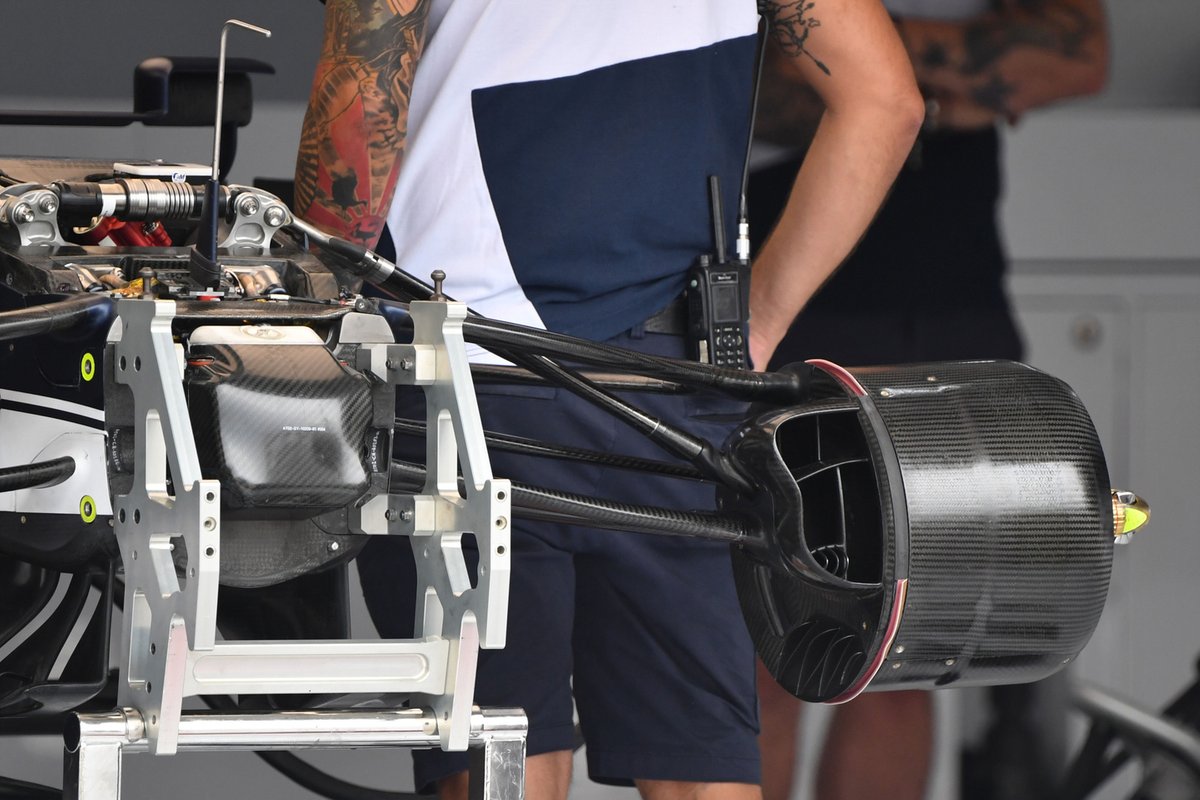 22/29
The front brake assembly on the AlphaTauri A02 with the drum attached - note the small winglets on the inner fence that have become a popular addition up and down the grid. 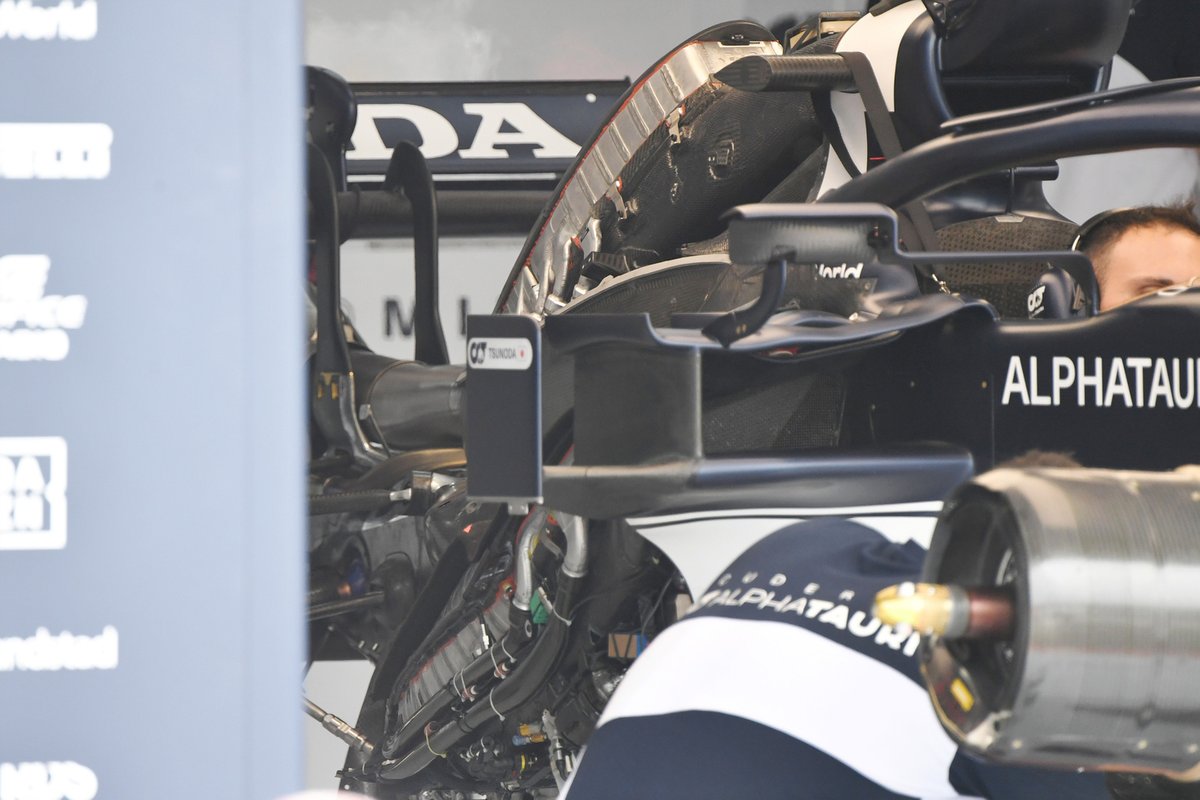 23/29
A peak under the covers of the AlphaTauri AT02 shows just how large the saddle cooler is mounted above the power unit. 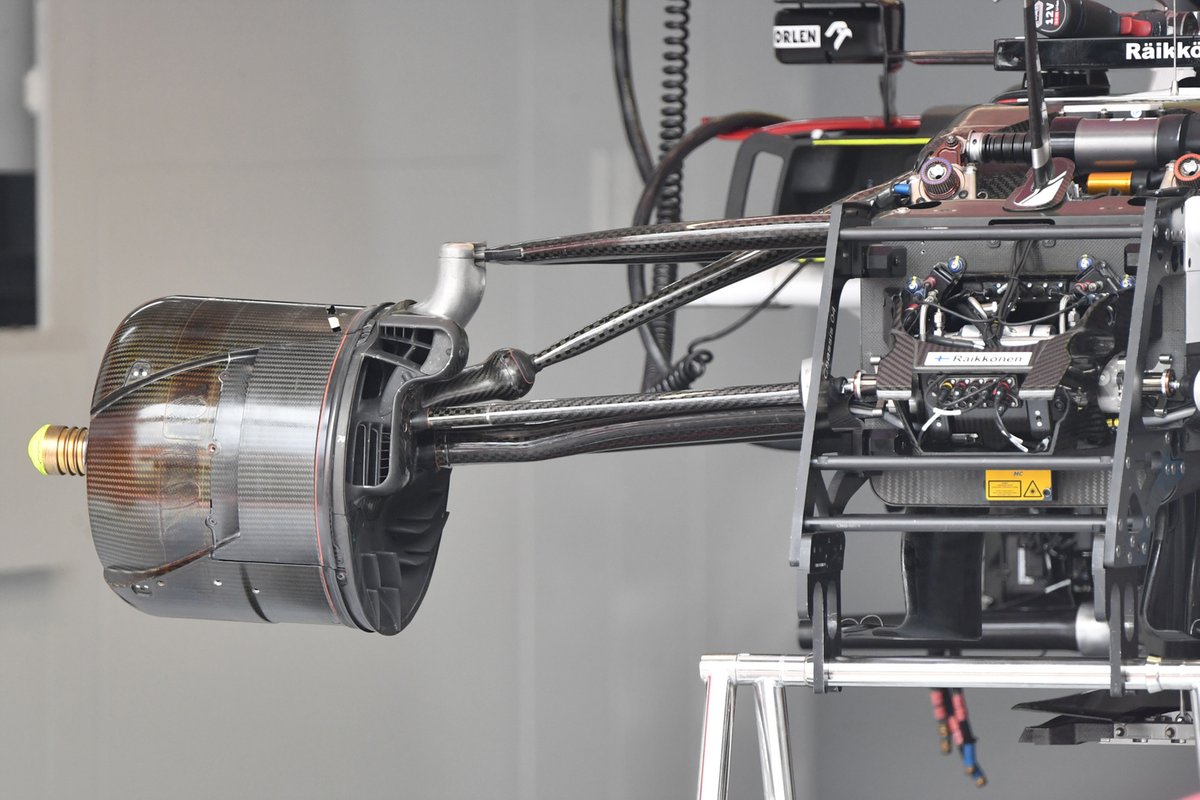 24/29
Alfa Romeo’s front brake duct inlet features numerous channels that feed the various components within and in some cases bypass them in order to assist aerodynamically. The sections of the inlet with guards are usually the ones designated for cooling and are used to prevent them becoming clogged by debris. 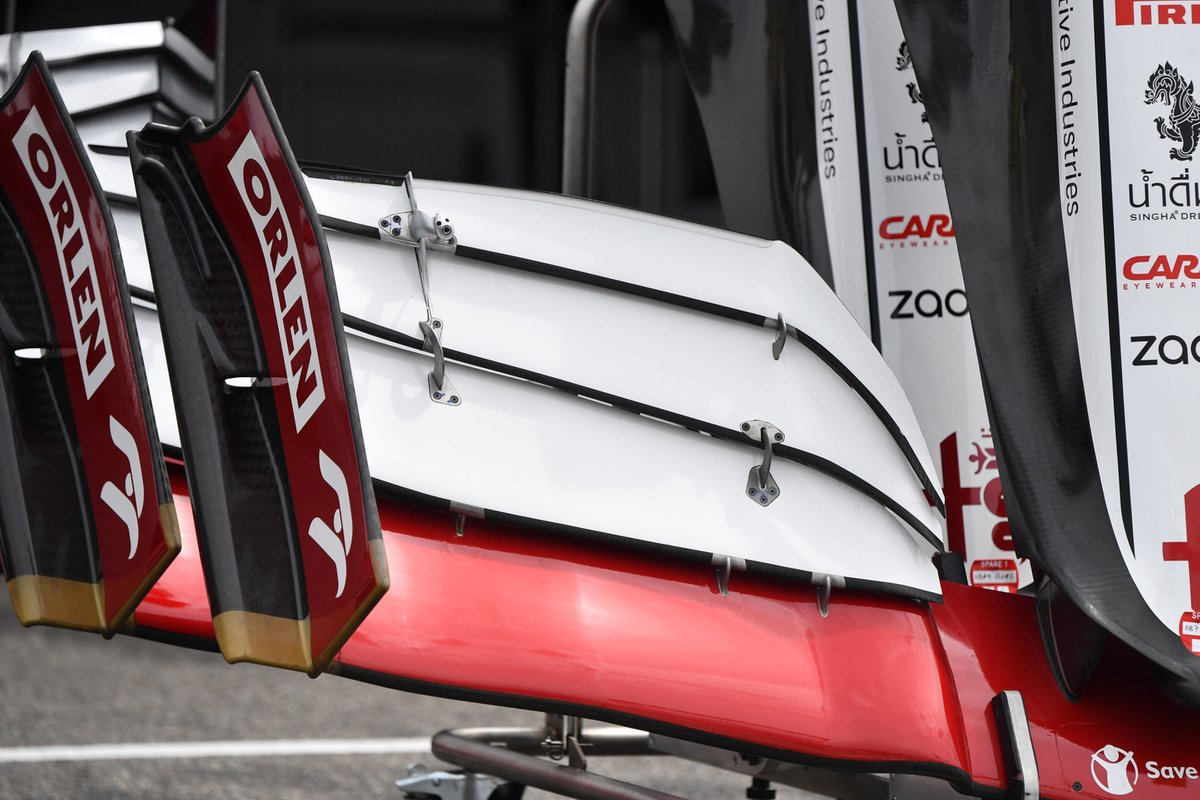 25/29
Top down shot of the Alfa Romeo C41’s front wing shows off the cavity it has created that allows airflow to move to the underside of the wing. 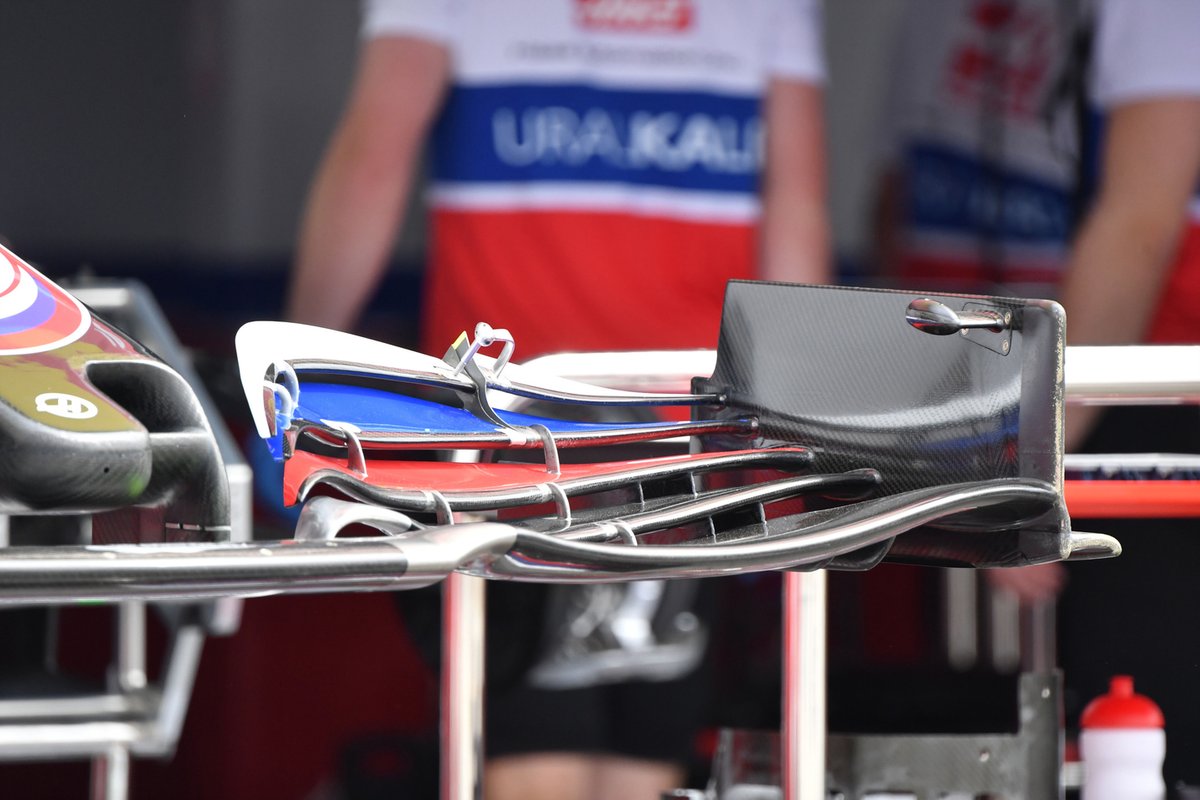 26/29
A close up of the Haas VF21’s front wing, note the adjuster has the inner section of the wing relaxed more in this image. 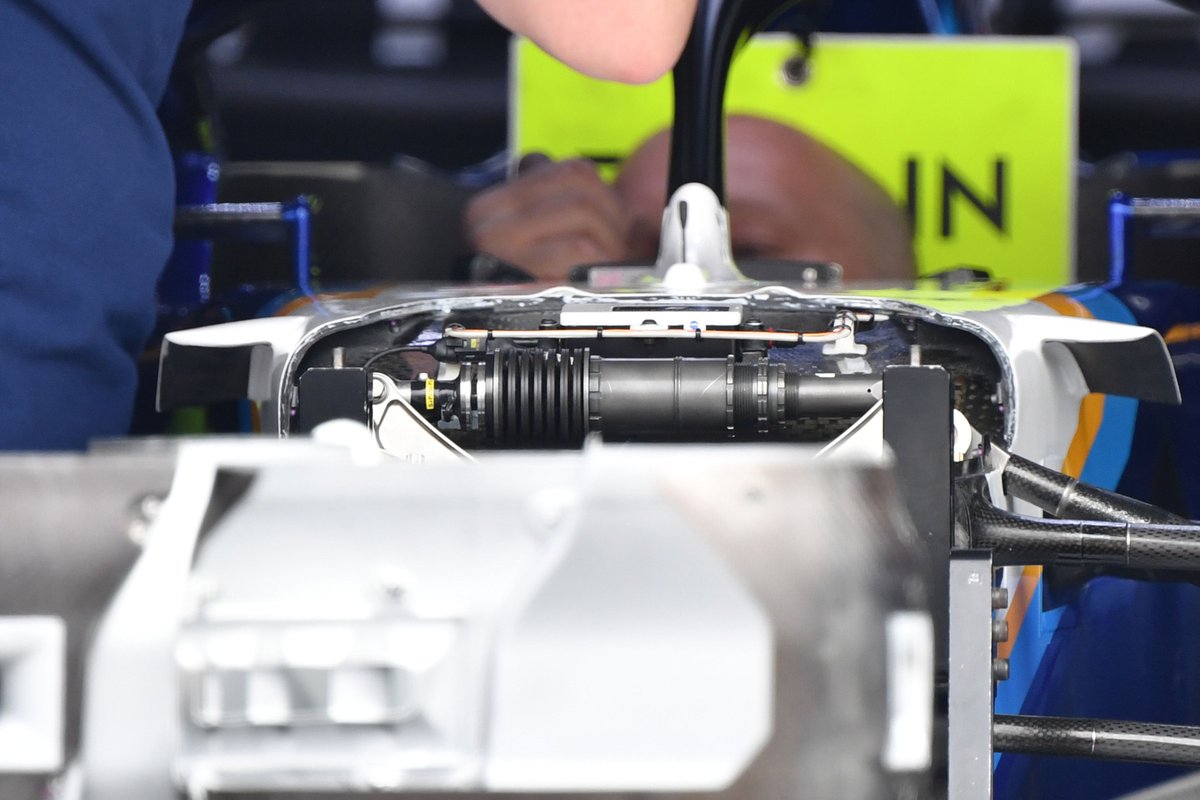 27/29
A fantastic close up of the Williams FW43B’s heave element. 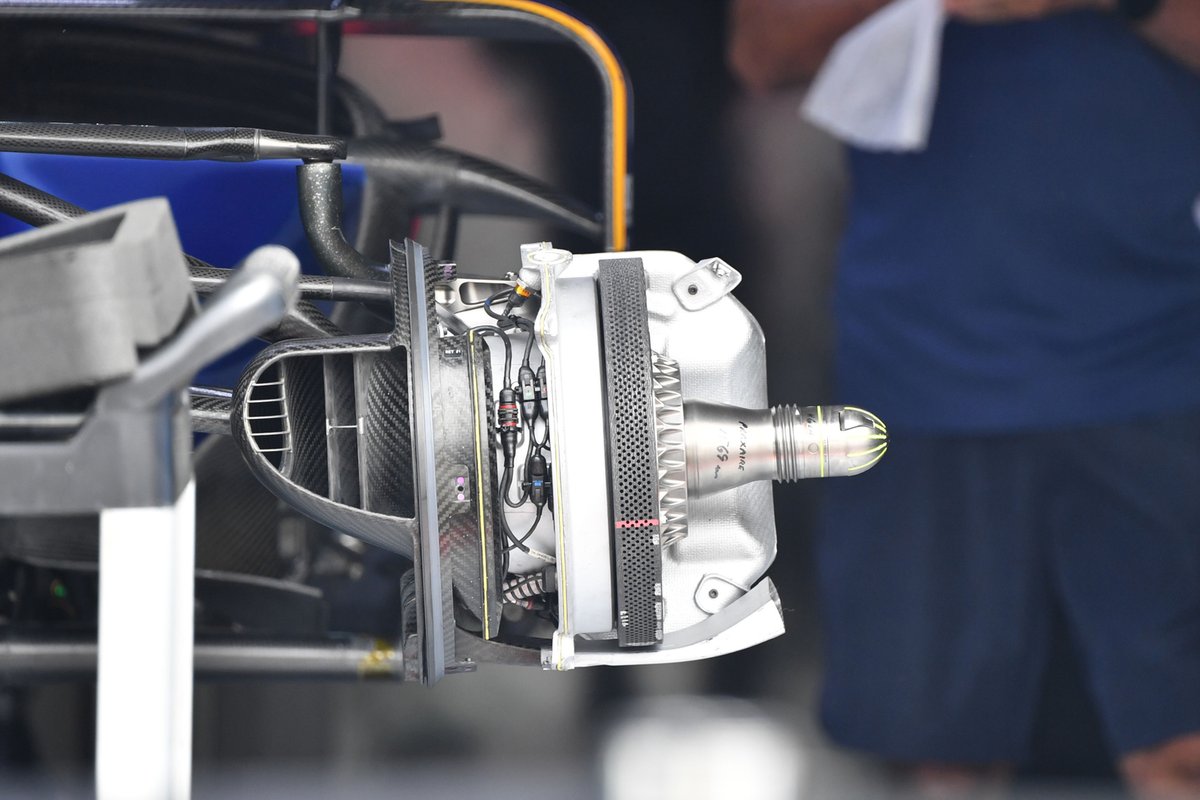 28/29
The Williams FW43B front brake assembly prior to the brake drum being attached - note the silver pipework in the lower section which carries airflow out the wheel rim to help manage the wake. 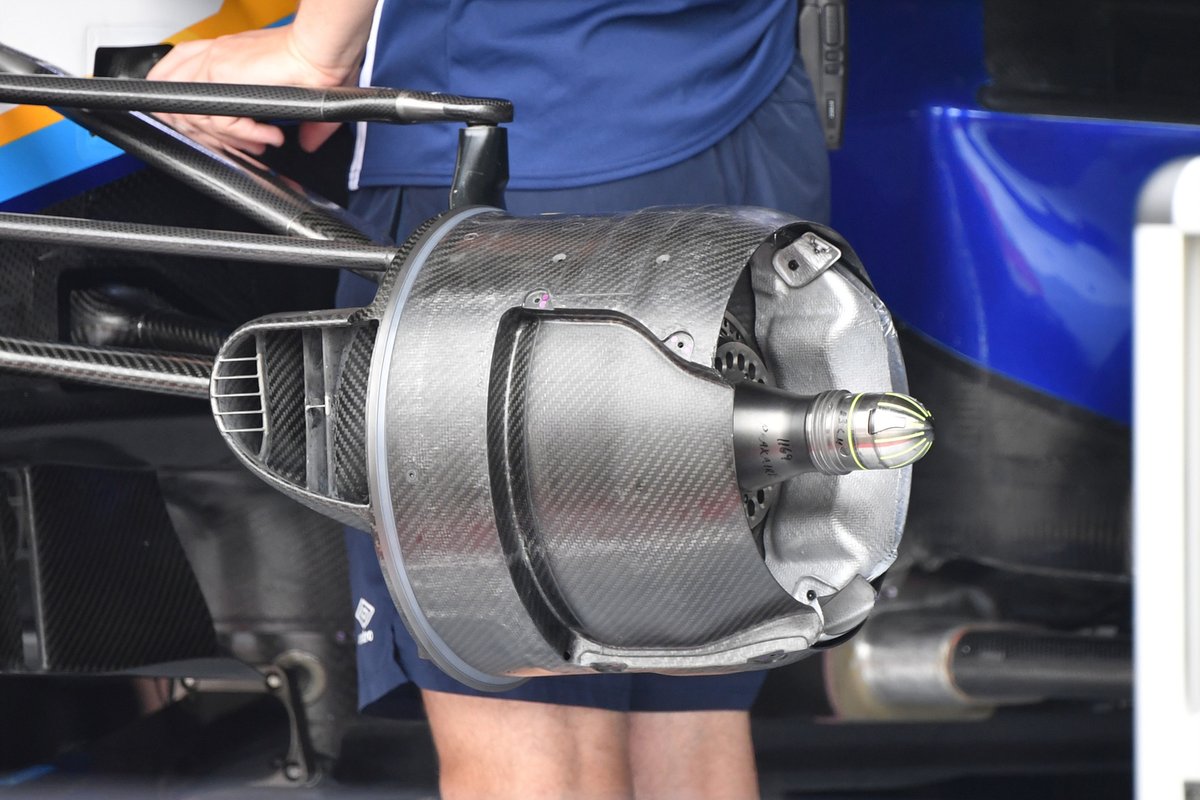 29/29
Now, with the brake drum attached we can see the team uses a trench to direct the airflow in the void between it and the wheel rim. Also note the wirework that prevents debris from collecting in the inlet that would reduce performance.