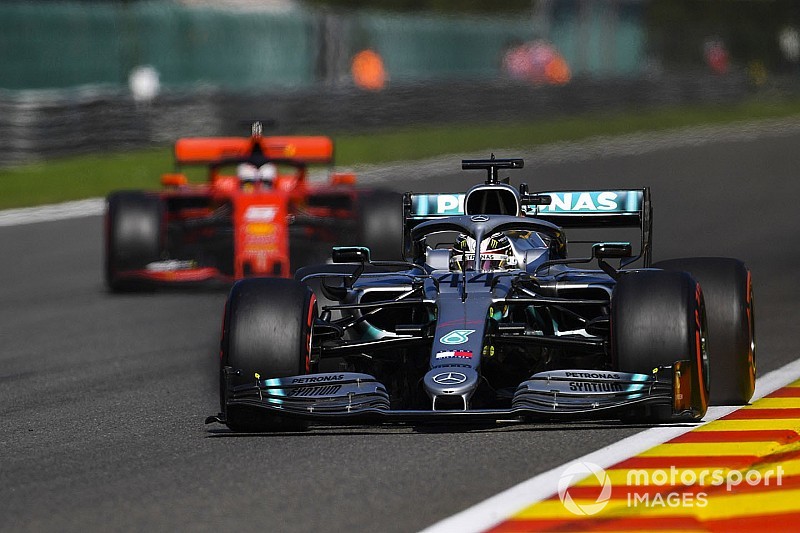 Lewis Hamilton felt that the slow speeds drivers needed to do to prepare for their qualifying laps at the Belgian Grand Prix left them in a "dangerous" situation.

With drivers eager to stay close to the cars in front of them so they could benefit from a tow, as well as keep their tyres in the right operating window, a number of cars bunched up ahead of the first runs in Q3.

Hamilton nearly ran into the back of teammate Valtteri Bottas at one point as they slowed to avoid faster cars approaching them, while Bottas later locked up to avoid hitting Nico Hulkenberg.

The world champion said he could never remember having been forced to go so slowly before, as he suggested things may need to change in the future.

“I think this year is definitely the slowest we have been, and today felt a little bit dangerous at one point because we were going around Turn 15 on the kerb and there was a car coming and I couldn’t move,” said Hamilton. “I couldn’t go on the grass. I was stuck behind Valtteri and Hulkenberg.

“I can imagine that if I was on a lap and I was coming around to find everyone crawling around at 5mph it would be a bit of a worry and a bit of a distraction.

“I am not really sure what we can do to stop it from happening. Maybe we have to be on the pitlane speed limiter or something like that.

“You should not be able to go at 5mph or 2mph or whatever...it was literally going as slow as possible to let people past.

“I did it in Austria I think to let everyone by because I was the first guy out there and the tow is so strong this year with these cars. They talk about the front wing being easy to follow but it has just caused a lot more drag, it is a draggier car this year so the tow is a lot more powerful than we have ever experienced.”

Former world champion Sebastian Vettel believed that the situation had been exacerbated by tyre temperatures now being so critical to tyre performance.

Asked if he felt new rules were needed to prevent this type of situation, Vettel said: “I am not in favour of any more rules, I think we have too many anyway.

“What we should change actually, and what we should take from this seriously, is that tyre-wise we should not be so much on the limit.

“Obviously you are fighting for a tow and so on, but you are also fighting to get into the optimum window, which years ago it was not that critical whereas now it is.

“You are fighting for the best spot on the track which will hit the peak in Monza for finding the right tow because it does make the difference, but that has always been part of those type of tracks.

“But I feel if we had better tyres, we could play with probably a bit more speed and so on.”

Hamilton added: “I agree with Seb. Every weekend they [Pirelli] put the [tyre] pressures up so high it is crazy, which again makes it a little bit harder for us.

“But again, the tyres are so hard. So getting then working, and they are talking about taking blankets off for the future, but we will never get temperature in the tyres if they do that.”

Williams: Latifi and Kubica among "handful" of 2020 options