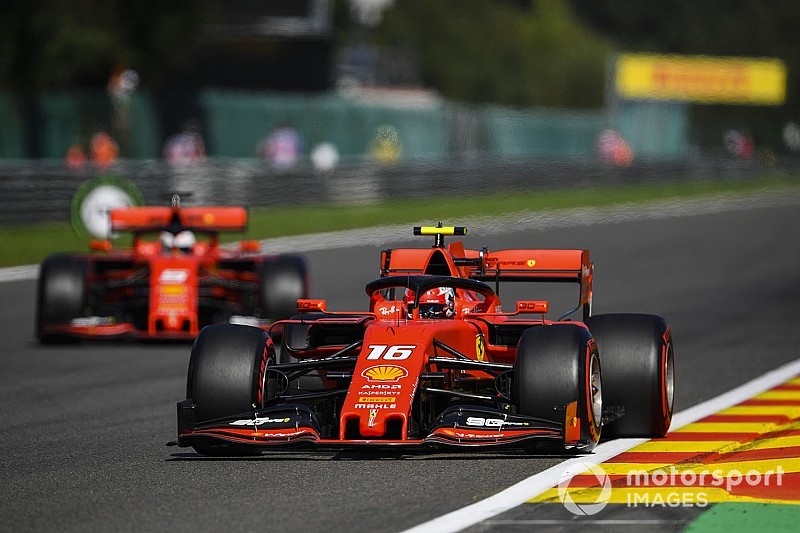 Charles Leclerc asked his Ferrari Formula 1 team to abandon "the perfect slipstream" and send him on-track "whenever the car was ready" for his Belgian Grand Prix pole lap.

Leclerc had a comfortable advantage after the first runs at Spa and eventually qualified on pole by 0.7s after improving on his second attempt, while teammate Sebastian Vettel had to battle to join him on the front row.

After securing his third pole of the season, Leclerc said the improvement was down to changing strategy after his first run.

"At first I really targeted the perfect slipstream for the first run in Q3," he said. "But after that I felt the tyres were not ready for Turn 1 and I actually lost quite a bit of time.

"For the second run in Q3 I asked to be sent whenever the car was ready, to be alone and try to do the job alone without slipstreams.

"In my opinion, on my car, it felt better to have tyres in the right window than having the slipstream so we went as soon as possible."

Vettel, by contrast, had to improve on his second run to overhaul Mercedes' Lewis Hamilton for second.

He did not follow Leclerc's lead and ended up part of a gaggle of cars that held each other up at the end of the lap, which he said cost him time.

"On both laps I was too close to the cars in front and the tyres were not right to start the lap with. It was lose/lose. The straights were good but I was too close and lost quite a lot of time in sector two."

Hamilton locked up and almost rear-ended teammate Valtteri Bottas while trying to slow down on a warm-up lap, and Bottas almost hit another car in the same way.

"On the perfect scenario you have got the tow and the tyres in the window," Hamilton said.

"In Q3 I don't think so, everyone was backing up and we had that slow section, with [Nico] Hulkenberg I think it was and Valtteri and myself.

"And again in the next one, everyone was backing up again into the last corner. The second one was a bit of a better chance but it's still very, very tricky. I don't think it was optimum for all of us."