Lewis Hamilton has conceded that Ferrari looks 'very, very strong' right now, but he says it is not unusual for his Italian rival to hit the ground running in testing.

While Hamilton's Mercedes team has not focused on delivering headline times at Barcelona this week, Ferrari has impressed with both the pace and reliability of its new SF90.

Toro Rosso boss Franz Tost has been quoted this week as suggesting Ferrari could be half a second clear of everyone else right now, but Hamilton insists the true picture is not clear.

"I don't think you can put a figure on it but Ferrari are very, very strong right now, as you have seen," he said.

"They are racking up great mileage as well, so it appears they have a better package than they had last year. It means it will be even more of a challenge for us this year."

Hamilton said it was hard to compare his team's pace to what Ferrari had done because their testing programmes were so different.

"They've been looking great," he said. "For us we are just digging deep trying to understand the car, pretty much the same as the beginning of every year.

"The Ferraris always particularly look strong, particularly in the last few years, they have looked strong right at the beginning. So, that is to be expected. For us we are just going about our process. Everyone is working extremely hard so it has been normal."

Hamilton said the priority for Mercedes was to focus on making its car better, rather than wasting effort trying to work out how rivals are performing.

"We let everyone else do their thing and try to focus...really dig deep, and try to make sure our processes are better than ever before," he said.

"Making sure we are analysing the data, better than ever before, and the delivery from the drivers' point of view. The feedback that I give, make sure it is more accurate than it has ever been before.

"That is what I will try to focus on and we are trying to focus on. And making sure we get through our run plans. We will have a better idea I guess this time next week whereabouts we stand."

But even if Ferrari carries over its strong start to testing in to the opening races, Hamilton has faith that Mercedes has the resilience to fight back.

"Right now we are competing against our past selves as a team," he said. "We are really trying to raise the bar in all those areas, and all the engineers back at the factory are raising the bar.

"No one is phasing out. No one is backing off. Everyone is pushing full steam ahead. It has been a difficult winter for the guys back at the factory.

"I can see it and I've heard from the guys: probably the most difficult one with the rule change once again, but if anyone can do it I truly believe it is my guys.

"We are the only team to have won a championship in a cross over of a rule and I am confident that even if we don't start on the right foot, particularly by the first race, I feel confident….." 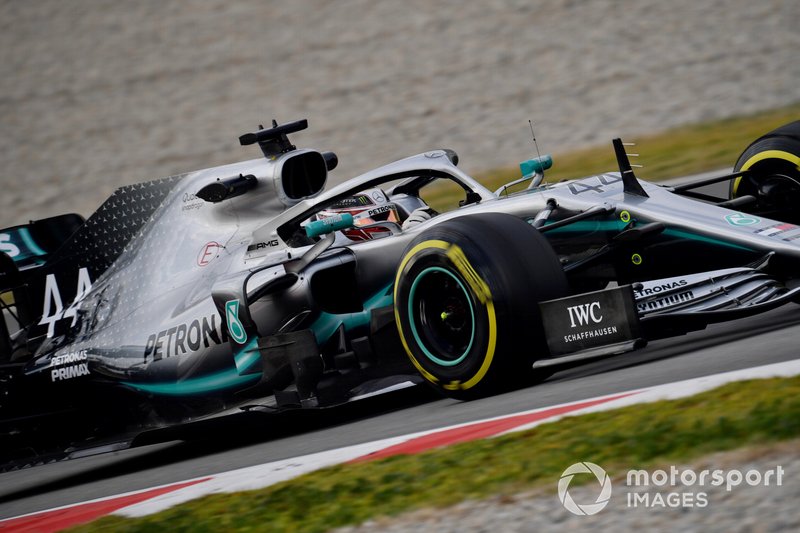