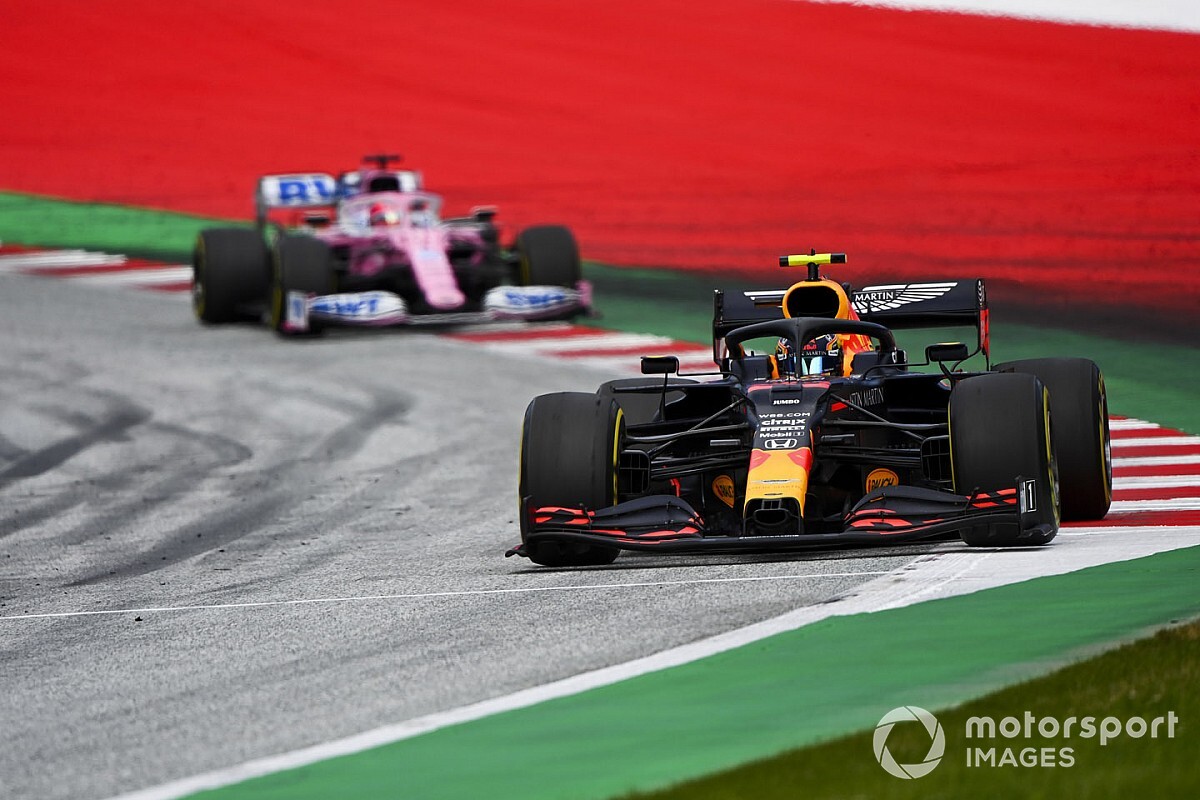 Red Bull team boss Christian Horner says all teams should be "worried" by the pace of the Racing Point, after the way the controversial car charged through the field in the Styrian Grand Prix.

After a disappointing qualifying that left Sergio Perez down in 17th on the grid, the Mexican pushed up the field to challenge for fourth at one point – before a collision with Red Bull’s Alex Albon damaged his front wing and resulted in him dropping back behind McLaren’s Lando Norris.

But the speed shown by the car, with Perez able to lap at the same pace as race winner Lewis Hamilton when he was in clear air, has left rivals wide eyed about the RP20.

“I mean, Perez was quicker than the Mercedes at that point in the race. Bearing in mind that [Valtteri] Bottas was on tyres that were within one lap of age to the Racing Point, Perez was three or four tenths quicker. So it was very impressive pace that they showed.

“I think Alex drove incredibly well to keep them behind. But also if you look at Alex’s pace on that tyre versus Bottas, again there was encouragement that we can take from that in a car that wasn’t carrying any damage.

Racing Point's early-season form was the trigger point for Renault deciding to lodge a protest against the car, amid suspicions it has directly copied last year's Mercedes W10.

The FIA says that the ground of Renault’s protest against Racing Point is admissible and the team's brake ducts have been impounded so detailed checks and comparisons with last year’s Mercedes can be made.

McLaren team principal Andreas Seidl echoed Horner’s view that the Racing Point was an incredibly fast car, but said that the onus was on his outfit to try to improve to match it.

Asked if he was worried by it, Seidl said: “It doesn't concern me because it just confirms the picture we have seen in Barcelona and also on Friday here.

“It's just a fact that this one year old Mercedes is simply a quick car, which is operated by a great team. We know that, with the development we did over winter, we did make the step to get to last year's Mercedes. So if they extract more from this car it is difficult for us to compete.

“Therefore it's very important for us now to simply make sure we keep developing our car, keep improving it and at the same time to maximise opportunities, which we did also in the first races with very good drivers and I think a lot of right decisions in terms of strategies.”

Racing Point "too fast for our liking"

Renault driver Daniel Ricciardo said that Racing Point is "hooked up" and "too fast for our liking."

Speaking before the protest was made official, Ricciardo made it clear that he's been surprised by the pace of the Racing Points.

"I just saw the race plot with all the lines and all that stuff," he said.

"And Perez had some serious race pace. When the team told me Perez was behind me, I was like, I thought we were having a good race. But obviously he started way back, and he was coming.

"So they're fast. I mean, a little too fast for our liking right now. But even watching the onboards, watching his lap from P2, the car is hooked up.

"I'll take nothing away from Perez, Perez is obviously a very good driver. But that thing's working very well at the moment. So they're a bit of a handful."

Ricciardo's teammate Esteban Ocon, who retired with a cooling issue, agreed with his teammate.

"We were still on to have a good result in the end so I don't worry on having the Racing Point go that far in the soft tyres. So in terms of saving the tyres, we are not bad. We are just lacking slightly pace against those pink machines."