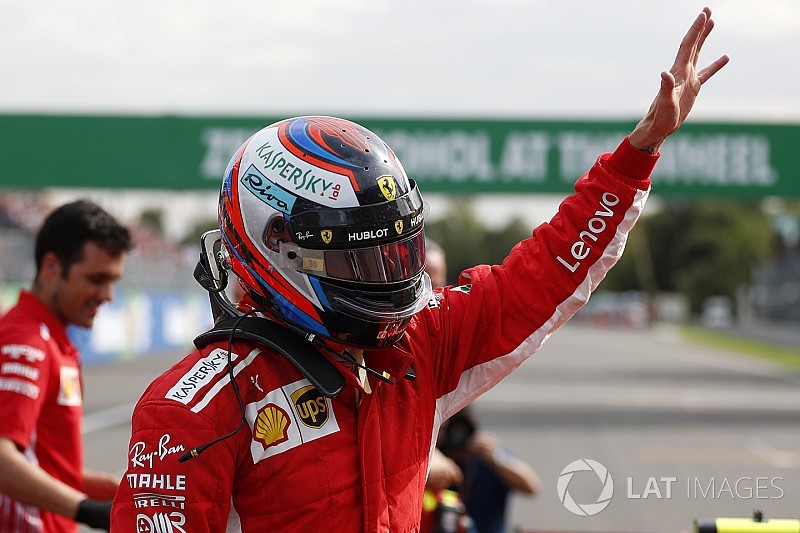 Kimi Raikkonen claimed his first Formula 1 pole position of 2018 with a last-gasp effort in qualifying for the Italian Grand Prix.

The Ferrari driver was second fastest behind Lewis Hamilton on the first runs in the Q3 top 10 shootout, but while both drivers improved, Raikkonen outpaced the Mercedes driver.

Sebastian Vettel briefly took top spot after crossing the line ahead of Raikkonen, before the Finn completed his lap to post a time 0.161s faster.

Raikkonen's superb pace in the final sector - aided by a tow - was key to his pole, completing it a tenth-and-a-half faster than Vettel.

Hamilton did improve on his second run, but it wasn't enough and he ended up in third place, 0.014s slower than Vettel.

Valtteri Bottas, in the second Mercedes, has struggled to match his teammate's pace all weekend and was fourth, 0.362s slower than Hamilton.

Max Verstappen was fifth for Red Bull, 1.5s off the pace, and ahead of the Haas of Romain Grosjean and the Renault of Carlos Sainz.

Toro Rosso driver Pierre Gasly was ninth after a perfect run in Q2 got him into the top 10 shootout, but didn't have the pace to threaten the top eight.

Williams reached Q3 for the first time in 2018 after Lance Stroll's strong performance in Q2. He ended up 10th and almost three tenths behind Gasly.

Kevin Magnussen, in the second Haas, was eliminated in Q2 after heading into the first chicane side by side with McLaren's Fernando Alonso on his final lap.

Alonso ended up 13th having failed to set a serious time on his second run as a result, saying "Magnussen wanted to race into Turn 1' and laughing over the radio.

After Q2, Haas team principal Gunter Steiner and McLaren boss Zak Brown had what appeared to be a heated discussion, presumably about this incident, in the pitlane.

The stewards will investigate the incident after qualifying.

Magnussen's lap was also ruined, but his first-run time almost got him into the top 10, as he ended up just 0.002s slower than Gasly and just ahead of the Williams of Sergey Sirotkin.

Renault's Nico Hulkenberg did not set a time in Q2 because he is set to start on the back row thanks to a combination of a 10-place grid penalty for causing a start crash at Spa.

But Hulkenberg did do a lap, meaning he was classified ahead of Red Bull's Daniel Ricciardo, who is also set to start on the last row thanks to power unit penalties and did not run in Q2.

Force India's Sergio Perez was the quickest of those eliminated in Q1 during a flurry of late improvements, with both of the Williams drivers, Hulkenberg and Gasly jumping him late on.

Perez only completed one run during the qualifying session and ended up just one thousandth of a second slower than Grosjean in the battle to make the cut in Q1.

Sauber's Charles Leclerc failed to improve on his final flier and was relegated to 16th late on, asking "Why are we so slow?" over the radio on his in-lap after lapping just 0.002s off 15th place.

Toro Rosso driver Brendon Hartley was 18th, with the team telling him he lost a tenth-and-half in the first corner on his final lap.

This would have been enough to elevate him comfortably into the Q2 positions given he was just 0.133s off 10th place.

Marcus Ericsson, who escaped a massive accident at the first chicane during FP2 on Friday was 19th fastest ahead of McLaren's Stoffel Vandoorne.