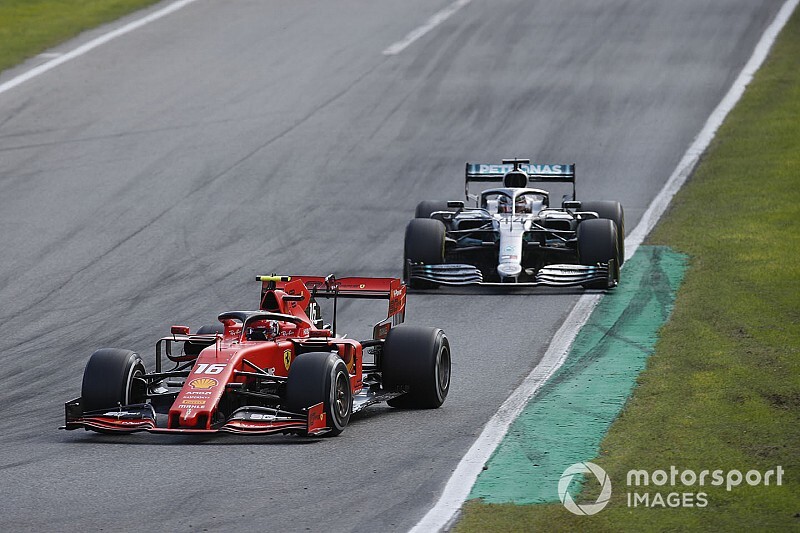 Ferrari’s Charles Leclerc has dismissed suggestions that Formula 1 drivers will be more willing to race dirty in battle because of the new black-and-white flag policy.

Since the Belgian Grand Prix, F1 race director Michael Masi has introduced the equivalent of a ‘yellow card’ system, where drivers are given a warning flag about their conduct prior to a penalty being issued.

But, in the wake of Leclerc’s robust defence against Lewis Hamilton at Monza that earned him a warning, some in F1 have suggested that drivers would now take more risks in racing rivals because they knew that the chances of a straight penalty had been reduced.

Leclerc does not agree with that viewpoint and says the fact that race stewards can still impose an immediate penalty for something Masi has issued a warning for means that the rules still need respecting as much.

“At the end, I don’t think it will change anything,” he said. “You never know if you going to take a black-and-white flag or a penalty to be completely honest.

“But I haven’t spoken to the stewards yet to understand what is the difference between a black-and-white flag and a penalty, and when they will use them in different situations. So I need to clarify that.”

Red Bull’s Max Verstappen's made it clear that he was fully behind the new approach to be more relaxed about handing out penalties, as he urged race stewards to ensure they keep their approach to matters consistent.

“If they keep it consistent then I’m very happy about it because it just gives you a bit more hard racing, which I think we have been lacking before in Formula 1,” he said.

“I mean I don’t mind to have a few touches throughout a grand prix, and even if it’s not touches I think you should be able to defend yourself.”

The Monza stewards' decision was a major topic of discussion in the Friday drivers' briefing at Singapore.

Reflecting on his driving at Monza, Leclerc admitted that when he nearly clashed with Hamilton at the second chicane he was not completely aware where the Mercedes driver was.

But he reckoned he did not cross the line in defending unfairly, despite Hamilton saying after the race that he would now change his approach.

“I think it is hard racing,” said the Ferrari driver. “I was completely aware of what I was doing in the car. I think in this particular moment in the braking point, I was probably not completely aware he was on the right. But overall I wanted to race well, which I did.

"And I changed my approach after Austria. It was definitely pretty straightforward from the stewards to race a bit harder.”

Asked if he thought Hamilton was now concerned and would respond harder in the future, Leclerc said: “I don’t think Lewis is concerned because he is very strong mentally. I don’t think I make him concerned.

"As I said in Austria, to see Max fight myself that way and to see the stewards’ decision, I was surprised so I changed my approach.

“Maybe it will be exactly the same with Lewis. Maybe he was expecting a penalty at the time and he might change his approach from now on because he sees we can race hard. I don’t know, I think the next few races will tell us.”

Hulkenberg F1 exit would be "difficult" to take - Renault