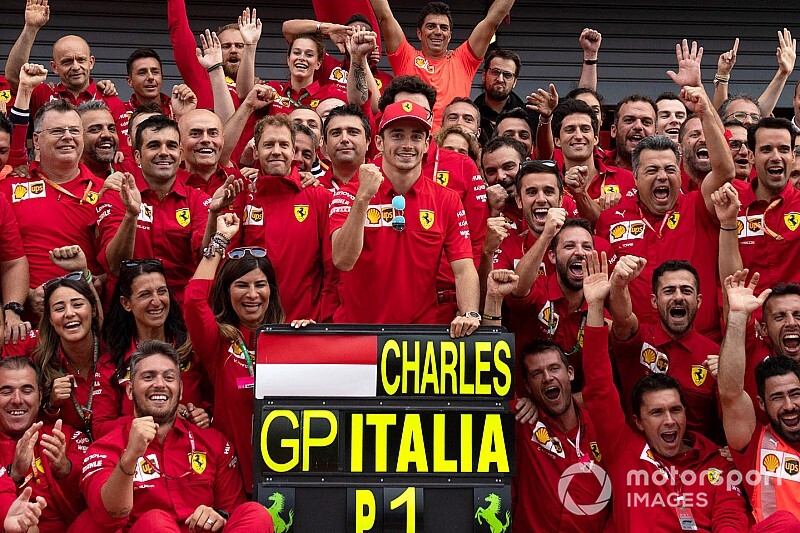 Charles Leclerc says his first year as a Ferrari Formula 1 driver was better than he expected because he did not believe he would score such good results in 2019.

Leclerc stepped up to Ferrari after just one season in F1 with Sauber and almost won from pole on his second start with the Maranello team, but was foiled by an engine problem in Bahrain.

However, he eventually claimed his first victory in Belgium before following that up with a second win one week later at Ferrari’s home race in Italy.

Leclerc scored seven poles, more than any other driver, over the course of the season and while he did not add to his tally of two victories, he did score a further eight podiums and finished fourth in the championship, 24 points clear of his four-time world champion teammate Sebastian Vettel.

“I'm happy, at the beginning of the season if you will have told me you will have seven poles and 10 podiums, I wouldn't have believed it,” said Leclerc when asked by Motorsport.com about his season. “So it's definitely better than what I expected.

“Looking back though there are quite a few mistakes so the targets now is to understand them and to not do them again. But I am satisfied about this first season.”

Leclerc had many opportunities to earn his breakthrough win before the summer break, but crashed in qualifying in Azerbaijan (where he had threatened for pole), was passed by Max Verstappen on the penultimate lap in Austria and crashed in the rain-hit German Grand Prix, which he would have likely started from pole had another reliability problem not struck in qualifying.

After the summer break, Leclerc could have won four races in a row – a Ferrari strategy quirk denied him victory in Singapore and gave Vettel the win instead, before Vettel’s retirement in Russia caused a safety car that took the win from Leclerc there.

His final pole, in Mexico, turned into fourth in the race because of Ferrari’s strategy.

“It’s not been an easy season,” Leclerc admitted. “The first part we have been struggling but I think we've been working well and I think the hard work paid off on the second part of the season with two incredible wins.

“Then again, I've still got a lot of work to do to get better. But I'll put my head down and get better.”

Leclerc said he learned “a huge amount” in his first year with Ferrari and his priority was to ensure any errors made in 2019 are not repeated.

“I'm pretty sure well it will only get better from this season,” he said.