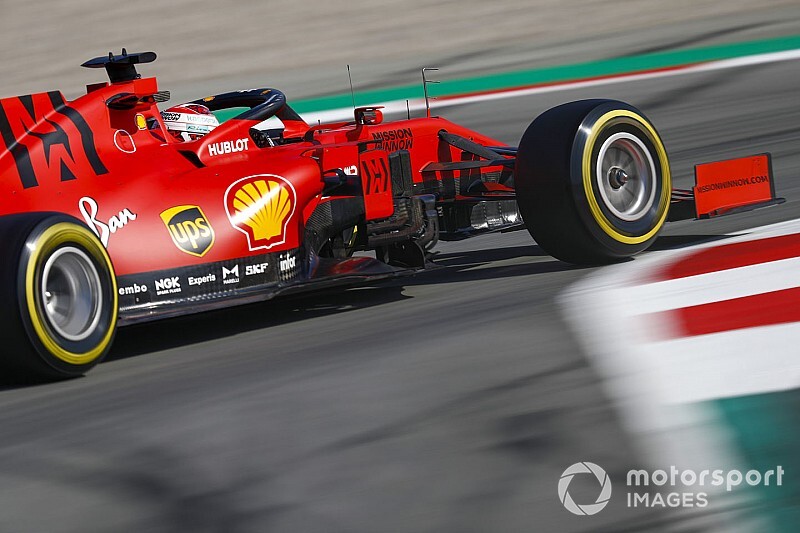 Charles Leclerc says his Ferrari Formula 1 team has "changed a little bit our approach" to pre-season testing, after he finished only 11th-fastest on the opening day of 2020 running.

Leclerc, who received a call from Ferrari at 6.45am to replace his unwell teammate Sebastian Vettel for the first day, completed 131 laps on the day but was over a second down on the pace-setting Mercedes of Lewis Hamilton - despite having set his best time on a softer tyre than the reigning champion.

This was in stark contrast to the first day of testing last year, in which Vettel set the pace, before Leclerc himself then went quickest on day two.

But Ferrari's strong showing in Barcelona testing last year did not translate to the start to the season that had been expected, and Leclerc has admitted the Italian team is consciously holding off on performance work this time.

"Of course I think we changed a little bit our approach compared to last year," Leclerc said. "Last year the testing was great but the first race was a bit less great.

"And yeah, I think we've learned a few things on this, and this year we decided to focus more on ourselves, trying to learn the car as much as possible in these first few days, and then focus on performance a bit later on, and we'll see if that pays off."

Leclerc added that Wednesday's work was "more about correlating the numbers from the factory and the track", which means it mostly benefits engineers whereas drivers "don't learn much" about how competitive it is.

"Still, driving a new car, I still try to push at the limit of the car," he continued. "We haven't pushed the car, but I'm pushing myself to try and know this car better.

"So, the more laps that we do with it, the more confident I'll arrive in Melbourne, so on that side, on the driving side, I've learned a lot, and then the different tests we've performed today, I think they've been very positive."

Leclerc suggested that Ferrari was unlikely to take a page out of Mercedes' book from 2019 in bringing a very different car to the second week of testing.

Asked whether the SF1000 has accomplished team principal Mattia Binotto's stated aim of prioritising downforce compared to its predecessor, Leclerc said: "It's quite difficult to see that at the moment. Of course I feel quite quick in the corners, but it's always difficult to compare one year to the other.

"I think the good benchmark will be at the first race when the tyres will be in the right window. It's still very cold now, and the downforce has quite a big effect on tyres. So it's all about having the aero that puts the tyres in the right window. And for now we can't really know, so we just focus on ourselves."