Ferrari Formula 1 driver Charles Leclerc says he knew he was on the limit of what is “acceptable” when defending his lead from Lewis Hamilton at Monza.

Leclerc was deemed to have moved in the braking area when Hamilton attempted to pass him on the outside heading into the second chicane.

He became the second driver to receive the unsportsmanlike conduct flag since its reintroduction by race director Michael Masi, following the warning to Pierre Gasly at Spa.

However, Leclerc insisted that the warning was not in his mind for the rest of the race.

“No, I knew it was on the limit,” said Leclerc. “But at the end I wanted to give absolutely everything to have this win.

“It was not in the back of my mind. I tried to be at the limit of what’s acceptable, and that’s what I have done, so very happy to take the win home.”

Leclerc acknowledged that his second victory in two races had answered any critics of Ferrari’s decision a year ago to promote him after a single season of apprenticeship with Sauber in 2018.

“Obviously it feels good. It’s not been an easy start to the season, I’ve done a few mistakes, and in that I think you can consider a little bit the youth. But it’s not an excuse either. I think I’ve grown a lot since the beginning of the season.

“I understood the critics of me last year, obviously me being too young, second year in F1 and already in Ferrari, it was early for sure. I can only thank Ferrari for believing in me. They had a lot of data, and I believe they analysed. It was not an easy decision.

“At the end I’m very happy to have these kinds of result, which show that I was maybe more ready than what some people thought.” 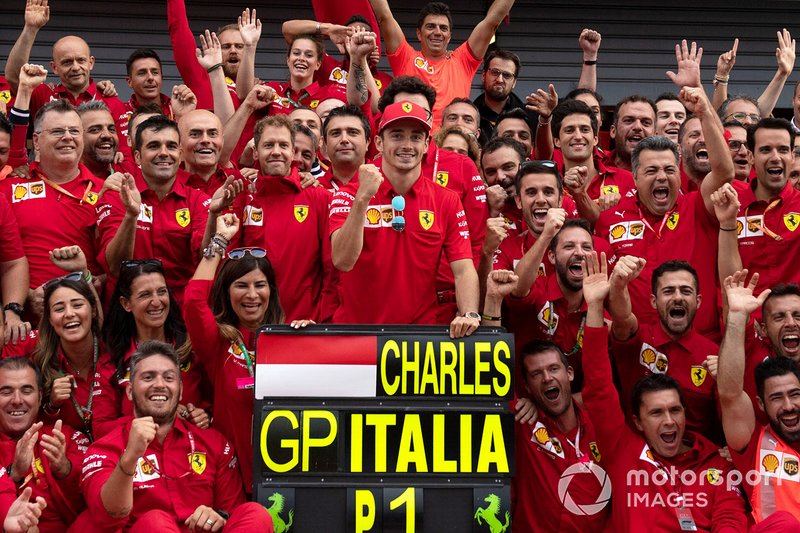 Race winner Charles Leclerc, Ferrari poses for a photograph with his Ferrari team