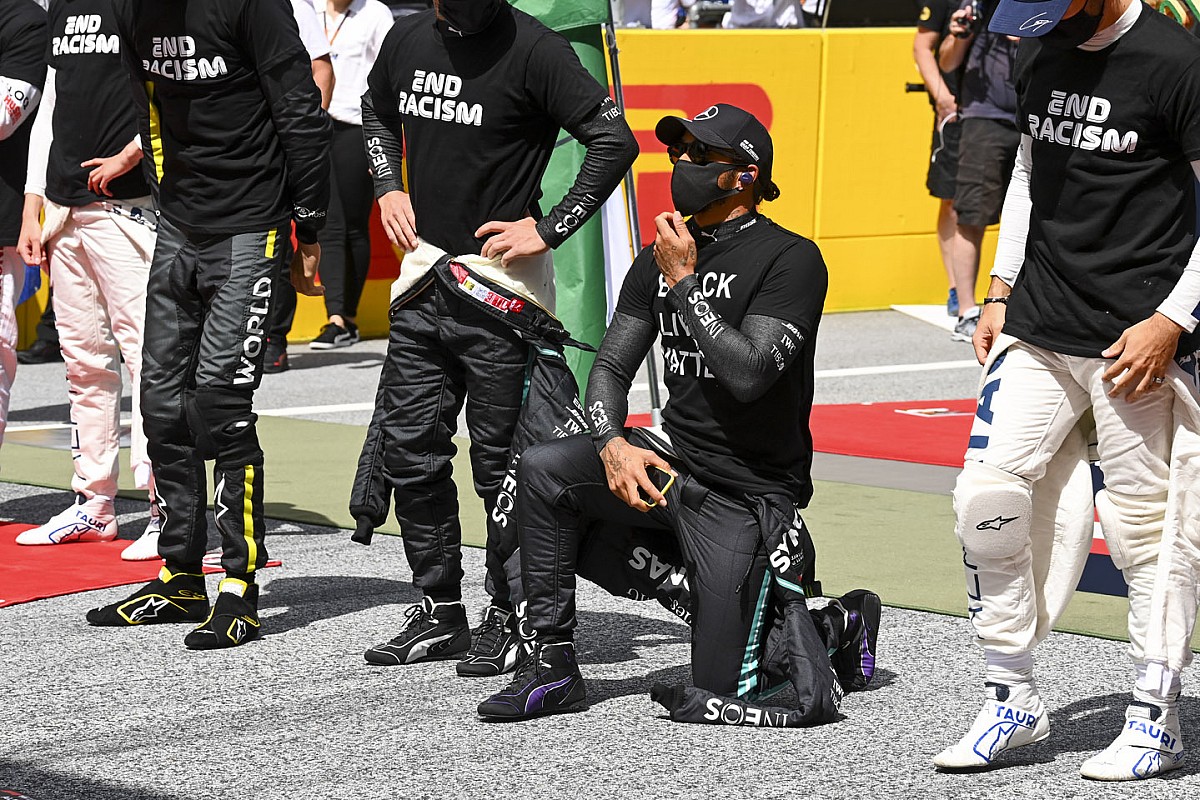 Lewis Hamilton is hopeful that all 20 Formula 1 drivers will take a knee together in the future after talking to those who stood ahead of the start in Austria.

While the F1 drivers had planned out a show of solidarity against racial injustice ahead of the first race in Austria, there were no official plans for the Styrian Grand Prix until Friday’s drivers’ briefing. All 20 drivers wore t-shirts reading ‘End Racism’ before each of the Red Bull Ring races, with 14 then taking a knee on the grid.

Some of those who opted not to kneel explained they remained committed to ending racism, but felt more comfortable expressing their opposition in their own way given the connotations of kneeling in some cultures and nations.

Hamilton said he was glad to see the kneel continue ahead of the second Austria race, and revealed he had spoken one-on-one with the drivers who opted not to do so to.

“There wasn’t a plan to [kneel] again, for whatever reason, but we did the drivers’ briefing, and we stay on afterwards and have a Zoom chat,” said Hamilton. “We had this debate of whether we’re going to do it again. I said I’m going to continue to do it. There were some that were like: ‘Well I already did it last week, I’m not doing it again.’ There were some that continued to have the same approach that they had to the first week.

“That’s why I tried to spend a bit more one-on-one time with a few of those that had chosen to stand, just to have a chat. From the drivers’ point of view, I think we’re going to come closer during this period of time, not saying that everyone is going to be taking a knee, but over time, we begin to talk about this more often.

“I like to think that at some stage, we’ll all be together, understanding, taking a knee.”

The kneel appeared more rushed last Sunday as drivers made their way from the back of the grid to join their colleagues, with Kevin Magnussen absent after not having a t-shirt or face mask to hand.

Hamilton said he hoped better planning would lead to a more organised display from the drivers should they opt to continue to kneel in Hungary this weekend.

“Because we planned it, it wasn’t in the FIA schedule, so it was all a rush,” added Hamilton. “We were supposed to be there I think at 15 minutes-to, I was there at 10-to, and the guys were coming from much further back. We just got on with it, and some did try to get there, but it was too late.

“Moving forward, maybe next [time] we’ll try to do a better job, if we are to do the same thing. But that’s not my choice.”