Eifel GP weekend "valuable" for Schumacher despite no running

Mick Schumacher remained upbeat despite seeing his Formula 1 practice debut get cancelled by the weather, saying his weekend preparations with Alfa Romeo had been "valuable". 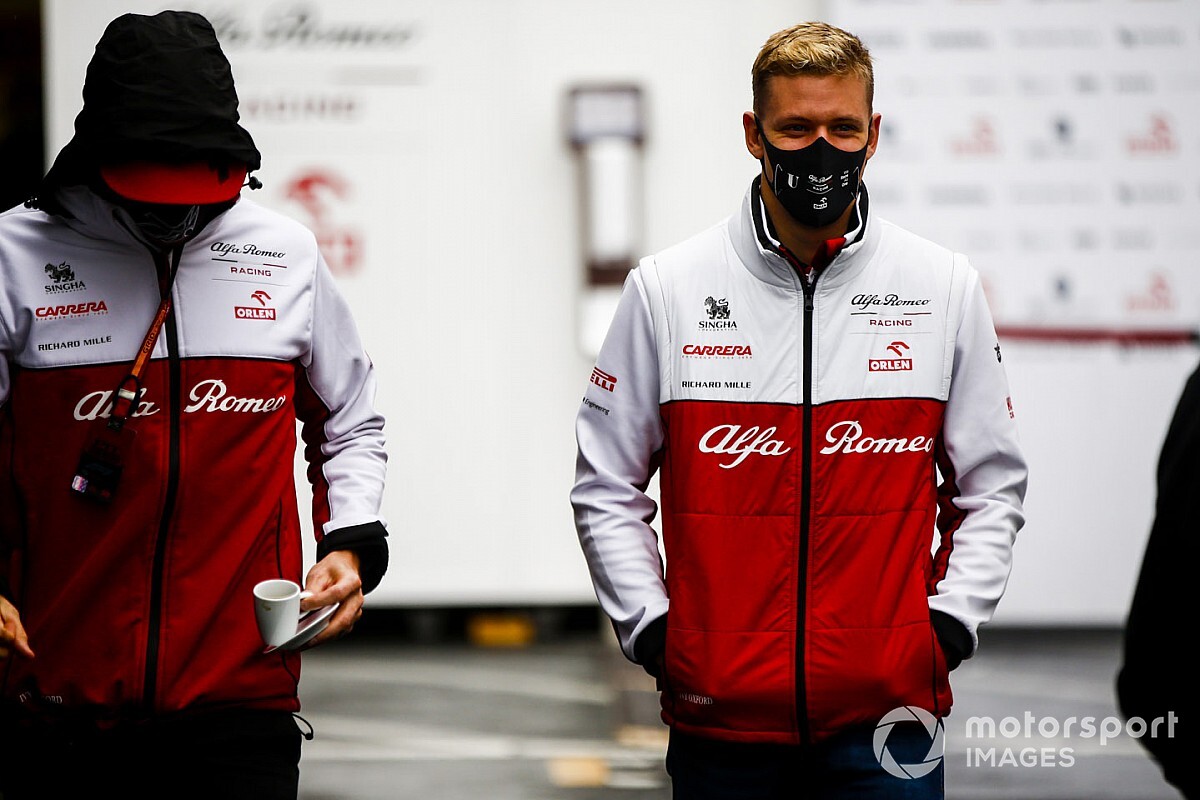 Schumacher had been due to take part in opening practice for the Eifel Grand Prix at the Nurburgring with Alfa Romeo, continuing his development ahead of a possible F1 graduation in 2021.

But the son of seven-time F1 world champion Michael Schumacher was forced to wait for his grand prix weekend debut as rain and fog prevented any running in FP1.

"Obviously it's been a shame not to get out," Schumacher said.

"We knew that the weather forecast didn't look great. This time of the year in the Eifel is not the most sure there is going to be dry, so on that side, we knew it might be wet, and it was.

"In the end, the preparation was good, we've done a lot of meetings and I got so much knowledge out of it. "It's been very helpful."

While there is no F2 supporting F1 at the Nurburgring, Schumacher will remain on-site with Alfa Romeo for the remainder of the weekend to get embedded with the team.

"I'll stay here with the team, and we'll go over the meetings, and also the procedures on how the actual F1 drivers are doing at he moment to just get an insight of how things are running," Schumacher said.

"Definitely I think it's going to be very valuable for me, and I'm very much looking forward to it."

Schumacher currently leads the F2 drivers' standings with two races remaining this year, and is in contention to step up to F1 next year with Alfa Romeo.

The Ferrari Driver Academy member stressed his focus lay on F2 for the time being despite the regular links with a move into F1 for 2021.

"For me, it's important to finish off the F2 season on a high," Schumacher said.

"We're in a strong position now, that's where my main focus is. For the rest, I cannot really tell you anything about that now."

Ferrari is yet to confirm any alternative practice plans for both Schumacher and fellow FDA member Callum Ilott, who had also been due to make his first weekend appearance with Haas at the Nurburgring.

Schumacher said there were no plans for any further private testing at present, having recently driven a 2018-spec Ferrari at Fiorano, but would jump at any opportunity to conduct more F1 running.

"Any opportunity would be great to hop into the car," Schumacher said. "F1 is the goal, F1 is the dream. So the more I get into it, it would be more of an opportunity for myself to show myself in that category.

"For me, the focus is on F2, trying to finish that on a high and focus on the championship."

Eifel GP Friday as it happened

Red Bull, AlphaTauri will have to use same engine - Horner