Racing Point has brought the updates it had promised for the Singapore Grand Prix, most notably adding a brand new front wing to its RP19 Formula 1 car.

Having made a number of large changes over the previous rounds, including new bodywork and nose design to overhaul the car, Racing Point has continued its aggressive upgrade strategy.

The additions for Singapore are expected to be Racing Point's final large-scale upgrades before the team switches its focus to its 2020 car.

The new front wing follows the trend of using the outboard portion of the wing to drive more airflow outboard, while using the inside section to produce the majority of downforce.

At the outboard ends, the wing elements have a low angle of attack, while the elements on the other side of the flap adjuster bracket are more inclined to develop a stronger level of downforce - required to perform strongly at Singapore.

The upper three flaps have also been re-profiled as a result, compared to the more uniform flap sections on the previous wing, as seen from Giorgio Piola's image below. 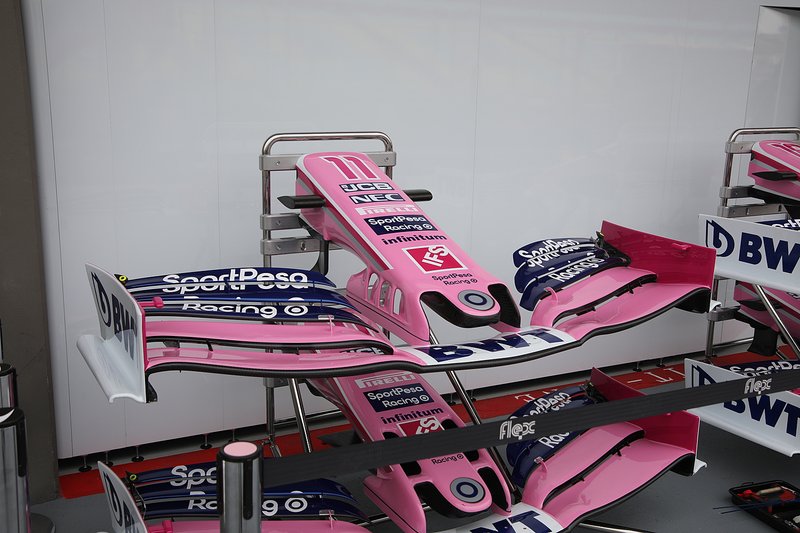 This pairs up with a new endplate, which features a prominent cutaway at the footplate [lead image].

Although very similar to the endplate that Racing Point first introduced in practice at Montreal, the new endplate no longer features the small ridge aft of the cutaway.

The footplate's primary function is to create a vortex underneath, as the high pressure air is drawn below as the car is in motion.

As it does so, it creates a rotation which can then be driven outside, pulling further airflow around the front tyre.

The endplate shape seems to be an attempt to release it earlier, using the endplate to guide it outwards.

The rear wing has only undergone a subtle change, as the centre of the mainplane has been raised slightly at the leading edge.

Doing this should boost the overall downforce output by building more camber into the wing, and is augmented at the rear by a new T-wing design.

The T-wing is a new single element design, which bends downwards at the ends to control the placement of the vortices produced at the tips.