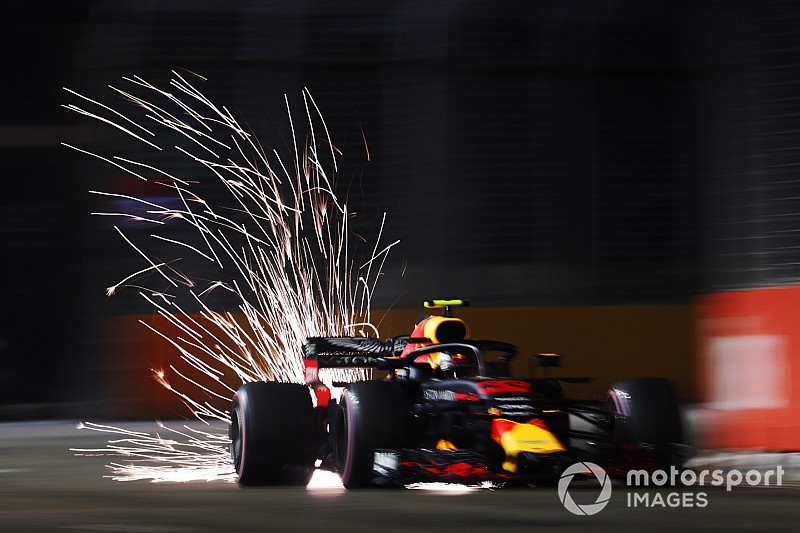 Red Bull Racing boss Christian Horner says the team is working with Renault to solve the mapping issue which affected both drivers in qualifying for the Singapore Grand Prix.

Max Verstappen complained about his engine's power delivery on team radio on Friday and again in FP3.

Before qualifying, the team thought it might be looking at the third row of the grid, but Verstappen earned second place, despite having to abort his second and faster run due to an engine cut-out.

His teammate Daniel Ricciardo was down in sixth.

"It was a fantastic lap, and unbelievable effort," Horner told Motorsport.com.

"To drive round the issues he had was truly impressive. It was a shame, I think without it we could have had a shot at the pole there, but to be starting on the front row feels like a pole position anyway.

"I think going into qualifying the engineers thought fifth and sixth was the likely outcome, so I think they've done a good job in getting the chassis tidied up."

Horner explained that Verstappen had to adjust his driving to deal with the issue, which also affected Ricciardo.

"Unfortunately with the mapping he's just not getting the delivery of the power than he's requesting from the pedal, so it's very intermittent. That's what's been having him over in terms of downshifts and on upshifts.

"So he's had to drive around that. Daniel's had that issue as well, but it's certainly affected Max more, or he's certainly been more vocal about it."

Horner was careful not to direct any blame at Renault, noting that the Spec C – which only Red Bull is using – is still early in its development curve.

Although Verstappen suggested that it would be less of an issue in race trim anyway, Horner says that Renault will do some more work at its Viry base.

"It's probably a numbers issue, which you're allowed to change. Under normal circumstances you'd expect some simulation or dyno time going into hopefully tidying that up.

"The Renault guys are working flat out on it. This is the Spec C, it's still new. It's delivered the power, so it was definitely the right call to take the engine into this qualifying.

"Despite the issues it still has a bit more power. We just have to tidy it up for the race tomorrow. Hopefully it will be cleaner than when he drove out of the pits today."