Thirty years have gone by since the death of Colin Chapman. Many still reflect on his innovations to this day. Many of them are still being used today. The Lotus name leaves on, and there are still Lotus Seven's found on race tracks!

It seems strange to realize that 30 years have passed since the death of Anthony Colin Bruce Chapman. At the same time, one has to wonder what Colin Chapman would think about the modern era of Formula One, and the fight over the naming rights of Lotus.

Hailing from Hornsey, Great Britain, Chapman attended the University College in London studying mechanical engineering but not for finely-tuned racing machines; instead he was interesting in airplanes. At the university, Chapman was active in the Air Squadron where he learned to fly. At the age of 20, he was a pilot in the Royal Air Force. While he, like many young men, was deciding which direction he would take in his life, Chapman started to buy and resell used cars. He then went to work for the British Aluminum Company.

When he purchased a 1930 Austin Seven, his life ended up taking him for a ride that many dream of but never reach.

Chapman and friends used their knowledge and skills to rebuild a 1930 Austin Seven which they ended up calling “Lotus” due to all the changes they made. In 1952, he and Michael Allen founded the Lotus Engineering Company with his portion coming from his then-girlfriend Hazel, whom he later married.

By 1956, his first single-seater racing car was built, and history was made. The Formula 2 Lotus 12 was a success so Chapman turned his attention to the premier series entering grand prix events. Two Lotus 12s were ready for Graham Hill and Cliff Allison in 1958. Chapman was not happy with the Lotus 16s, and thus his new challenger in 1960 was a Lotus 18 with a rear-engine to power his Team Lotus drivers.

Success as a constructor for Lotus came at Monaco when the Rob Walker team with Stirling Moss driving took the victory over Ferrari in 1960. One year later Chapman’s Team Lotus earned their maiden F1 victory in the USA with Innes Ireland.

With the growth of the company, both in formula cars and road cars, the name Lotus was known throughout out the world. Sports car teams were racing the brand named after a flower; especially the Lotus Seven. Soon the Elan and the Cortina were seen not only on the roads but also on the race tracks.

From a garage rebuilding an Austin Seven, along with his own racing endeavors, Chapman ended up with seven Formula One Constructors' championships. His drivers for the Team Lotus Formula One team landed six World Champion titles. Team Lotus also took one Indianapolis 500 victory. 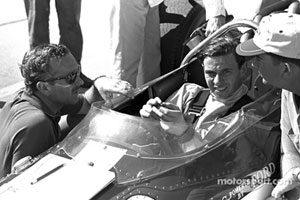 However, he and Team Lotus were dealt a hard blow with the loss of two of their champion F1 drivers. The first one was twice Formula One World Champion Jim Clark. The Team Lotus Scotsman earned his first title in 1963, and followed up with his second championship in 1965. Clark was racing in a Formula Two in Hockenheim, Germany when a tragic crash took his life in 1968.

The second one came two years later when Jochen Rindt did not survive a crash in the Lotus 72 during practice for the Italian Grand Prix in 1970; however he did end up taking the F1 championship, posthumously.

The other three championships came from Graham Hill, Emerson Fittipaldi, and Mario Andretti. Chapman’s Lotus team landed their first and only Indy 500 win with Clark in 1965.

Andretti’s 1978 championship was clouded in grief with the death of his teammate Ronnie Peterson on the first lap of the Italian Grand Prix at Monza. The tragic scene with at least nine racers involved will never be forgotten including three of the F1 drivers who despite the fire pulled Peterson out of his car. The Swedish driver did not survive but his points netted him second in the championship.

Reflecting on the loss of his friend, Andretti commented, "It was so unfair to have a tragedy connected with probably what should have been the happiest day of my career.”

Chapman was a pioneer in motor sports and he kept up with the latest technology, and his engineering skills and technics were at times ‘the cutting edge’.

He developed the use of struts as a rear suspension device; hence the words ‘Chapman struts’ for the ones used in the rear on any vehicle.

Chapman was the one who brought the monocoque chassis construction to automobile racing. The first usage was the 1962 Lotus 25. The technique allowed the body to be lighter and stronger, but yet offered more protection for the driver in case of a crash.

Wonder what he would think of today’s Formula One cars. Would he have had a ‘rubber nose’? Or would he approve of DSR? Bet Chapman and Adrian Newey could have interesting conversation on new innovations. That would be an interesting pairing.