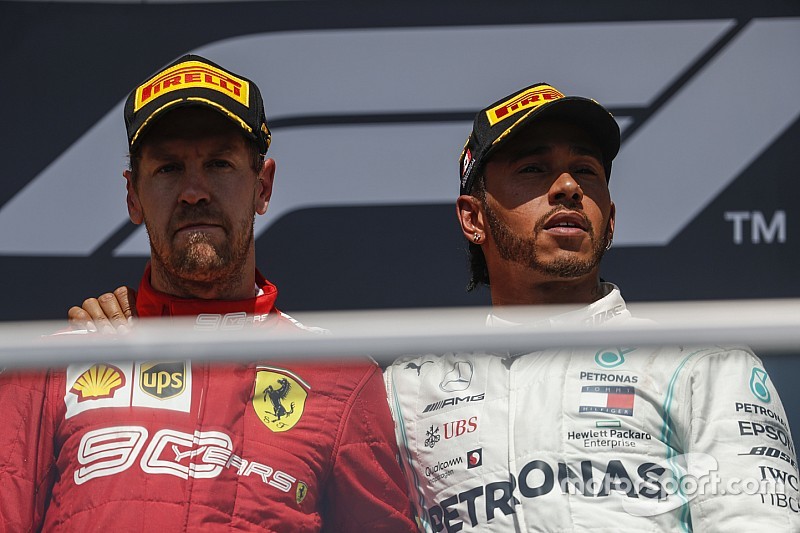 An angry Sebastian Vettel suggested that stewards needed to be "blind" to think he could have kept control of his car in the incident that resulted in a penalty that cost him victory in the Canadian Grand Prix.

The Ferrari driver was left furious at being handed a punishment for running wide at the first chicane on lap 48 and coming back in track in front of Hamilton.

The stewards felt Vettel was guilty of a wrongdoing and handed him a five-second penalty which led to him dropping behind Hamilton at the chequered flag.

Speaking on team radio after the finish, Vettel vented his fury at what happened.

"You need to be an absolute blind man to think you can go through the grass and then control the car," he said. "I was lucky I didn't hit the wall. Where the hell am I supposed to go?

"This is a wrong world I tell you. This is not fair."

Team boss Mattia Binotto tried to calm Vettel down but the German was having none of it.

"I am not staying calm. This is not fair. It is not fair. I'm angry..and I have the right to be angry. I don't care what people say."

Vettel refused to drive his car down to the post-race holding area and stormed immediately to his team hospitality unit.

He later returned and shuffled the number one banner on to the spot where his car should have been, after moving the number two in front of Hamilton's car, before attending the podium ceremony where he was briefly hauled on to the top step by the race winner.

Vettel later spoke on the podium but refused to be drawn too much on the incident, saying it was down to the fans to judge.

"For the rest, I think I said enough," he explained when asked for his feelings on what happened. "You should ask the people what they think. We had a great show. Ask the people..."

Hamilton said: "All I can say, I didn't make the decision so I don't know what they are booing at."