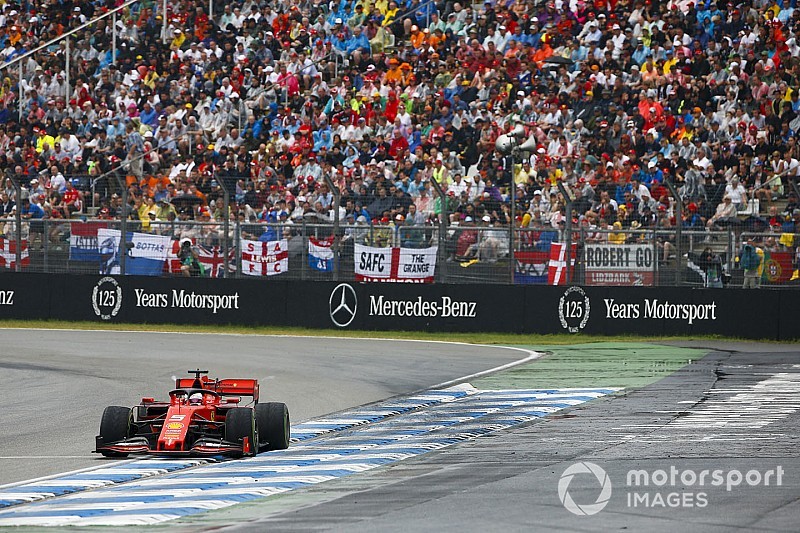 Ferrari Formula 1 driver Sebastian Vettel says the last-lap off that nearly cost him second place in the German Grand Prix was a consequence of him pushing for the fastest lap.

Having been resigned to last place on the grid by an intercooler failure in qualifying, Vettel scythed his way through the pack in the mixed-weather 64-lap event to run a few seconds behind eventual race winner Max Verstappen in the final stretch.

But with track conditions the best they had been all race, Vettel came up just 0.149s short of Verstappen’s single-lap race benchmark on the penultimate tour, and pushed again in an effort to take the bonus point away from the Dutchman.

Instead, he ran off the track at the Turn 8 left-hander and emerged only just ahead of the Toro Rosso of Daniil Kvyat, stretching his advantage back to almost a second by the chequered flag.

“I went off because I was pushing for fastest lap and it didn’t work,” Vettel admitted ahead of the subsequent weekend’s Hungarian Grand Prix.

“I think I’m not the only guy who went a little bit too close, but fortunately I picked the right place rather than the wrong place.

“I’m happy we got to the chequered flag and we used our chances when we got them, especially in the last third of the race.”

Vettel’s charge to second ended his run of three races off the podium, but the German felt Ferrari couldn’t be overly positive about its German GP outing, given it suffered two costly failures in qualifying.

“If you start last and get on the podium, you’ve come a long way, but overall we can’t be happy with the weekend in Hockenheim because we had big issues on Saturday and only one car saw the chequered flag on Sunday,” he said.

“Hopefully we’ll look back in a couple of weeks or months and say that, yeah, it [a turnaround] started to happen from there.

“But obviously the target is to win, so the whole team, including me, we’ve put a lot of effort into the project - into making sure we’re faster than the others. And currently we’re not, so far we haven’t been faster for most of the season, so we can’t be happy with that.”

While Vettel's qualifying issue has seemingly been resolved, Ferrari still needs "a little bit more time" to fix the fuel system problem that had sidelined Leclerc, according to the Monegasque.

Ferrari team principal Mattia Binotto said after the two problems that it needed to sort its internal approach to reliability, but the team has not disclosed the cause of those issues or the countermeasures put in place to prevent a repeat.

However, it is understood that Ferrari considers the problem to have occurred in unique circumstances and is very unlikely to happen again.

Asked by Motorsport.com if he was confident the issues would not appear in this weekend’s Hungarian Grand Prix, Leclerc said: “I think on both issues there has been quite a lot of analysis done. So, we are working on solutions.

"I think on Seb's one it's completely fixed. On our one it needs a little bit more time. But we understood what caused it so we are confident it won't happen again this weekend.”

Leclerc recovered from his qualifying issue to run at the front in the wild German GP but crashed out moments after moving into second place.

He said in Hungary that his response to that accident had not been as intense as when he crashed in qualifying in Azerbaijan, despite the consequences being bigger.

“After Baku I was definitely not the way I am now,” he said. “For me it was a much bigger mistake [in Baku].

“At Hockenheim the consequences have been very big, probably bigger than they were actually in Baku in qualifying because we are not scoring points, but on the other hand the conditions were very, very bad.”