Tom Gladdis aiming for the front on F2 return

Briton hungry for success after recovering from injury 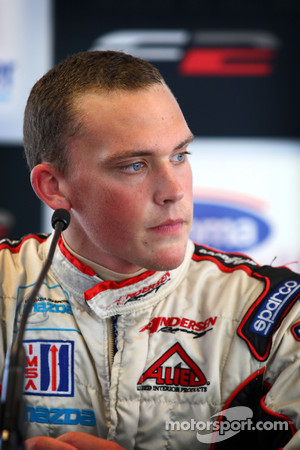 Britain's Tom Gladdis is the latest driver to be confirmed for the 2011 FIA Formula Two Championship, returning to the series after making a successful debut in the series in 2009 and contesting selected rounds in 2010.

The 20-year-old was the youngest driver in the field in 2009, but demonstrated his clear potential with impressive points finishes at Brno and Spa-Francorchamps which belied his young age and relative inexperience.

Gladdis impressed in Formula Two again in 2010, challenging for the points on several occasions despite only contesting three rounds. His best weekend came at Brands Hatch, where he challenged for victory in the second race -- eventually being edged out by Austria's Philipp Eng by just 0.545s. He also finished fifth in the first race, and qualified inside the top eight at both Silverstone and Brno -- although he wasn't able to further add to his points tally.

Gladdis insists the frustration of a bit-season last year, coupled with a serious foot injury which forced doctors to amputate three toes on his left foot over the winter, has made him hungrier and more focussed than ever ahead of the 2011 season.

"My main motivation is to finish consistently in the points and challenge for the race wins," Gladdis declared. "I want to thank my family and my sponsors, especially Silver Lining who sponsored Dean Stoneman last year, for the chance to compete and I'd like to pick up where Dean left off and reward their faith in me.

"We had some struggles last year, and the injury to my foot has been quite serious. My family have always been hugely supportive though and it's made me realise just how fortunate I am -- and made me hungrier than ever. I've really fought for my place on the grid this season, and I'm absolutely determined to make the most of it!

"To be honest coming back to F2 is like coming back to a family, and I'm delighted to be back. I learned a lot when I competed in 2009, but with hindsight I made a lot of mistakes as well. Then in 2010 I had a break between the opening round at Silverstone and Brands Hatch, and that really focussed me and made me realise just how much I want to be racing. If you want something you push for it, and this year is all about taking everything I have learned and pushing harder than ever for success."

Jonathan Palmer, Formula Two Chief Executive, said: "I am delighted that Tom Gladdis will be returning to F2 in 2011. F2 was a big jump for him in 2009 but he rose to the challenge very well, and a year later he made a big jump in competitiveness with a brilliant second at Brands Hatch. Tom is a very promising talent and a real pleasure to have in F2, with a healthily calm and realistic approach. If he can maintain and build on his 2010 form Tom really can win the championship this year, and he certainly should be a podium contender."