Hartley’s day got off to a difficult start when he crashed in FP1 after sliding wide going through the long Turn 4 right hander and hitting the wall with the left-rear of his car, breaking his suspension.

The incident was caused by the track surface breaking up, which led to a track alteration before FP2, where Hartley only came out for two untimed laps after his car was repaired.

He qualified 18th after “discovering [the track alteration] and discovering 250kW on the track” during the grid-setting session.

In the race, Hartley was one of three drivers – along with BMW Andretti’s Maximilan Guenther and Ma Qing Hua (NIO 333) – to be hit with a drive through penalty for a throttle map infringement described as “power out of RESS [battery] not respecting the homologated throttle pedal map", per an FIA bulletin.

After the chequered flag, Hartley had 10 seconds added to his race time for not using the full four minutes of his second attack mode activation, but this did not cost him a position in the final results.

“It wasn't a very successful first day on the job,” the Dragon Racing driver told Motorsport.com. "We had a crash in the first free practice – the track was breaking up. [That] meant we lost the last bit of time there, and we didn't get out of free practice two. So, we were kind of on the backfoot [from there].

“We thought we had some place in the race, but it didn't turn out to be the case – we really struggled for pace and [the team is] now investigating why. I don't really have a good answer at the moment, but we didn't have the pace to fight our way up.”

Hartely’s Dragon teammate Nico Muller missed out on making his FE debut as the team could not get his car repaired in time for the start of the race after his crash in qualifying.

Ma had 24s added to his race time for not serving his drive through penalty during the race, but he remained last – the only lapped runner – after this was applied.

Jean-Eric Vergne also picked up a post-race penalty as he was reprimanded and given one penalty point for speeding in the pitlane as he came in to retire with a broken steering rack early in the second half of the race.

Vergne explained his retirement to Motorsport.com, saying: “I could not steer anymore, something was stuck – you cannot turn the steering wheel anymore.

“[The issue started] maybe five laps in, but it was driveable – heavy, but drivable. And then it became like [juddering] – it was only turning like this, I could not be precise anymore. [I thought] ‘OK, I can continue like this not being precise, I'm gonna be slow, but maybe I can hold on and score some points’.

“But in the end, it was becoming too heavy and it was very unsafe for me to drive so I took the decision to stop. It was not possible [to race] anymore.” 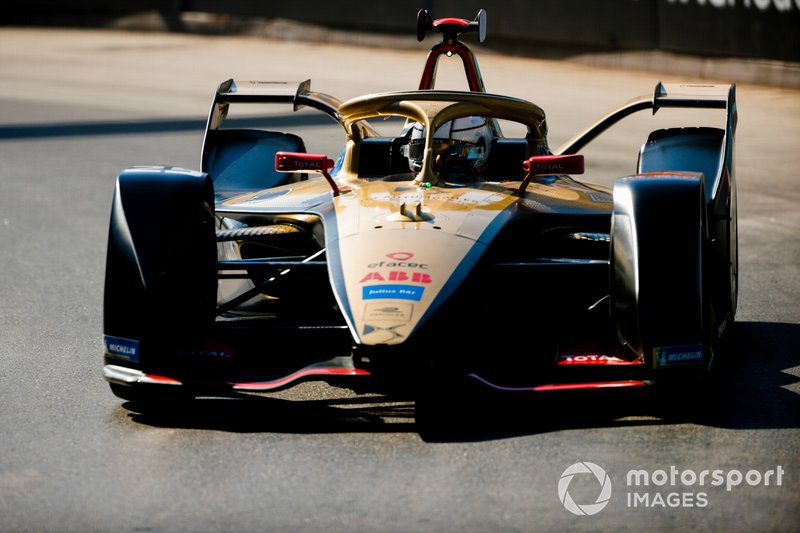