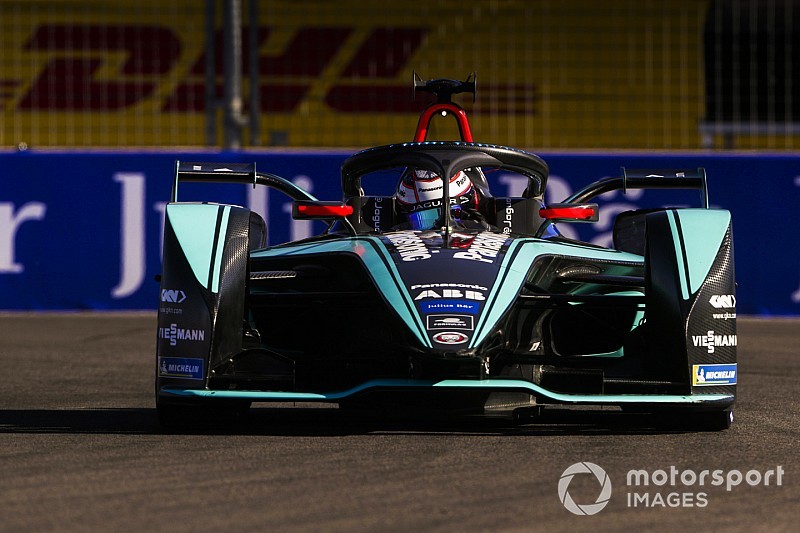 Jaguar’s Mitch Evans was quickest across the two practice sessions ahead of the ABB FIA Formula E race in Marrakesh, beating Andre Lotterer to the top of the timesheets in FP2.

Evans set the fastest time - a 1m17.262s - on his final lap of the session, using the full 250kW of power available to post the best lap in the dying stages of FP2.

The Kiwi had led the majority of the session having set an early benchmark with the 225kW available from attack mode, but was briefly dispatched from the top by Robin Frijns’ first full-power lap.

A cold and dusty track at the beginning of the day ensured that the second session was quicker, as temperatures began to rise in Morocco across the morning.

Frijns topped the earlier running, clocking in a 1m17.808s to beat former teammate Antonio Felix da Costa in the first session by a hundredth of a second.

The Dutchman then beat his time from FP1 in the final 10 minutes of the second session, before Andre Lotterer shaded him by over a tenth to lead the timing board at that stage.

Lotterer’s time then looked under threat from Nissan’s Oliver Rowland, but the British driver was baulked by Felipe Massa in the final sector and he was unable to capitalise on a strong opening to the lap.

Evans then returned to the top, punching in the best middle sector on a particularly lively lap to eclipse Lotterer by a quarter of a second.

The German held off from Sebastien Buemi, who was 0.05s behind to claim the third fastest time overall - ahead of da Costa and Frijns.

Reigning champion Jean-Eric Vergne was ninth-fastest in the second session, but was 10th overall as Sam Bird’s quickest lap in FP1 - in which he placed third - was fractions faster.

Bird came to a stop on track during his full-power lap, relegating him to 18th on the FP2 timesheets.

This was also a fate which befell Massa, whose inauspicious session was interrupted by an immediate stop on beginning his first 250kW run - which also affected Venturi teammate Edoardo Mortara in FP1.

Season three champion Lucas di Grassi placed 21st in FP2 having completed just five laps, as his Audi car was hamstrung by issues with the water pump - which will be replaced before qualifying.