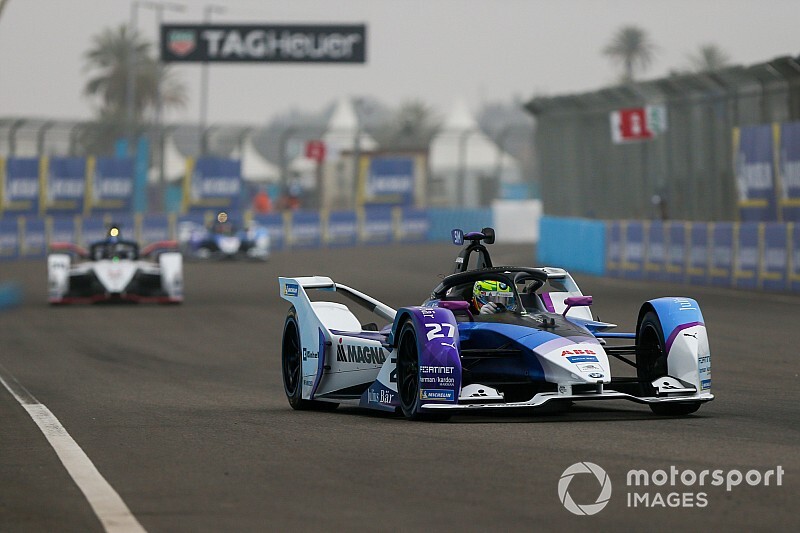 BMW Formula E driver Alex Sims says an “innocuous” crash with Edoardo Mortara was the cause of his last-lap retirement from sixth place in the Marrakesh E-Prix.

Sims started eighth after contesting the group one qualifying battle but was squeezed by Oliver Rowland into Turn 1, which also allowed the Jaguar of James Calado to pass.

Like his performance last time out in Mexico City, Sims showed strong race pace and on lap 13 began to climb from 11th.

He had been set to finish sixth, but was involved with a final-lap collision with the Venturi of Mortara on the run to Turn 7 – an incident missed by the TV feed.

“I was side-by-side with Mortara and we had a light touch in the braking zone,” Sims told Motorsport.com.

“It felt fairly innocuous but it put my steering out substantially and then it gave up halfway.”

The camera later cut to Sims inspecting the rear of his BMW, and he confirmed another terminal driveshaft fault – the same cause of his retirement from the Santiago E-Prix.

“It might just be another awkward one,” Sims added. “It does seem odd in Formula E that you can absolutely smash people and be absolutely fine and then have some lighter contact in other places and it can be race-defining. It was the latter today.”

“It’s just a shame after what had been a pretty well-executed race up to the end. The first lap was pretty disastrous - I wouldn’t say it was massively my fault.

Sims added that he did not think his attempted pass on Mortara was too excessive that late on in the race.

“Coming into the last couple of laps, I felt pretty strong on energy and pace,” he added. “Now looking back on it, you obviously think 'should I have just sat there?' but the move didn't feel like particularly risky.

Mortara, on the other hand, built up the crash and compared it to Sims’ collision with then BMW teammate Antonio Felix da Costa that denied the team a 1-2 in the Marrakesh race last year.

“He tried to outbrake me on the outside at Turn 7, a little bit like he did with Antonio,” Mortara told Motorsport.com.

“It was something that was not going to end up working either in terms of energy - because he used a lot of energy and I don't think he was so good in terms of that [both drivers had 2% of useable energy remaining at the time of the collision] - and also in terms of contact.

“He came back to me and tried to squeeze me a little bit at the end. We made quite big contact.

“I don't really know what happened to him but there was nothing I could do about it. I was very lucky because normally you damage the car.”

Vergne was in quarantine before Marrakesh podium charge