SHR Gaming drivers SHGSlick14x and SHG_HotRod_14p become the first drivers to sweep the Xbox One and PlayStation4 races in the same night.

While a handful of teams were working hard to race their way into the playoffs, Stewart-Haas Gaming was focused on making history - and they did just that in the eNASCAR Heat Pro League season finale at Daytona International Speedway.

As SHGSlick14x and SHG_HotRod_14p were celebrating, it was a night of frustration and mixed emotions for other teams.

In the PlayStation4 division RCR Esports driver Joey Stone (Sloppy_Joe_YT) finished fourth to set his team up for a possible event win only to see his teammate Jordan McGraw (TheJMacAttack34) has problems in the Xbox One division event finishing 14th ending their chance of advancing.

Petty Esports enjoyed their best overall team performance of the season after Diego Alvarado (diego dd18) and Miek Braas (MikeRPM43) each finished fifth in their races but still fell short of finishing in the top 10 in the final standings.

Hendrick Motorsports Gaming Club and Chip Ganassi Gaming also finished out of the top 10 and failed to qualify for the postseason. All four teams can still compete for race and event wins but will not be eligible for the championship.

SHG_HotRod_14p picked up his third win of the year in the PlayStation4 division was followed by Cody Giles (xX_Fluffy_Xx2), TJ McGowan (Voltage20_), Stone (Sloppy_Joe_YT) and Braas (MikeRPM43) to complete the top five. 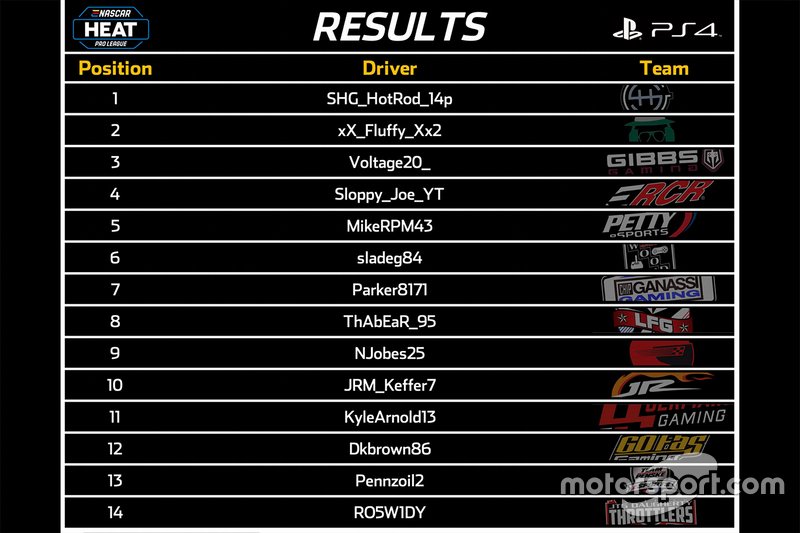 Jake Harris, the voice of Stewart-Haas Gaming, was obviously happy with his team’s performance in sweeping the wins at Daytona.

We had a plan in place the whole night and Slick executed it to perfection,” said Harris. “We’re the first team to sweep so ….”

SHGSlick14x led the way in the action-packed Xbox One race holding off Tyler Dohar (JRMDohar88) to pick up his second win of the season. Brian Tedeschi (ShellVPower22) finished third to help Team Penske Esports clinch the regular season championship. 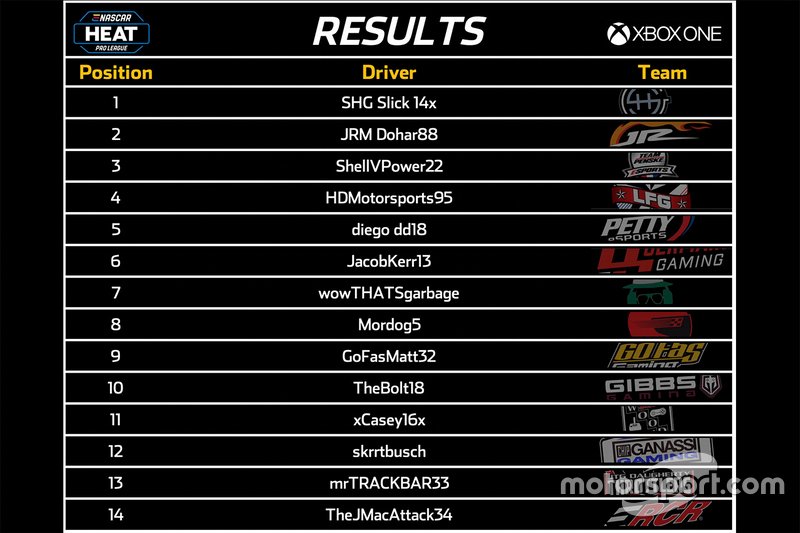 Despite the strong night for Stewart-Haas Gaming at Daytona Team Penske Esports was able to hold them off and take the regular season title by one point (564-563) with Roush Fenway Gaming close in third with 562 points. 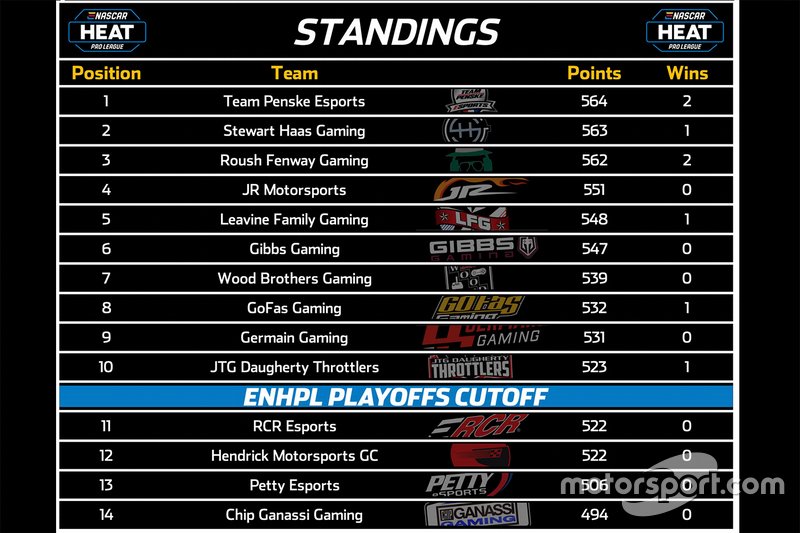 The regular season finale was also the final race of the season for the drivers using NASCAR Heat 3 as NASCAR Heat 4 will launch on Sept. 13th and the first playoff race will be held on Sept. 11th.

The race will be held one day after fans who pre-ordered the Jeff Gordon Gold Edition can begin playing the game.

The eNASCAR Heat Pro League will also hold an exhibition race featuring NASCAR Heat 4 on Wednesday, Sept. 4th. Fans are encouraged to tune in to watch the league compete with NASCAR Heat 4.