Stewart won his first race in the Camping World SRX Series on Saturday night, claiming his first win of any kind at Knoxville (Iowa) Raceway, an iconic half-mile dirt track.

Stewart won the first heat race and finished fourth in the second heat race to start on the pole in the 50-lap feature event. He led the first 13 laps until Michael Waltrip took the top spot, but Stewart reasserted himself on Lap 21 and held the point for the final 30 laps.

“It’s the first time I’ve been in victory lane at Knoxville,” said Stewart, who has witnessed his sprint car drivers at Tony Stewart Racing win the prestigious Knoxville Nationals 11 times. “This is where I’ve watched Donny Schatz and Steve Kinser and the greatest of the greats in sprint car racing.

"This is the place I’ve always wanted to be, for sure, so this is pretty cool. This is the ‘Sprint Car Capital of the World,’ and I want to thank the Knoxville staff and all the fans. They’re not used to tin tops, and if they see tin, they want to see it on top of the cage, not surrounding the cage.” 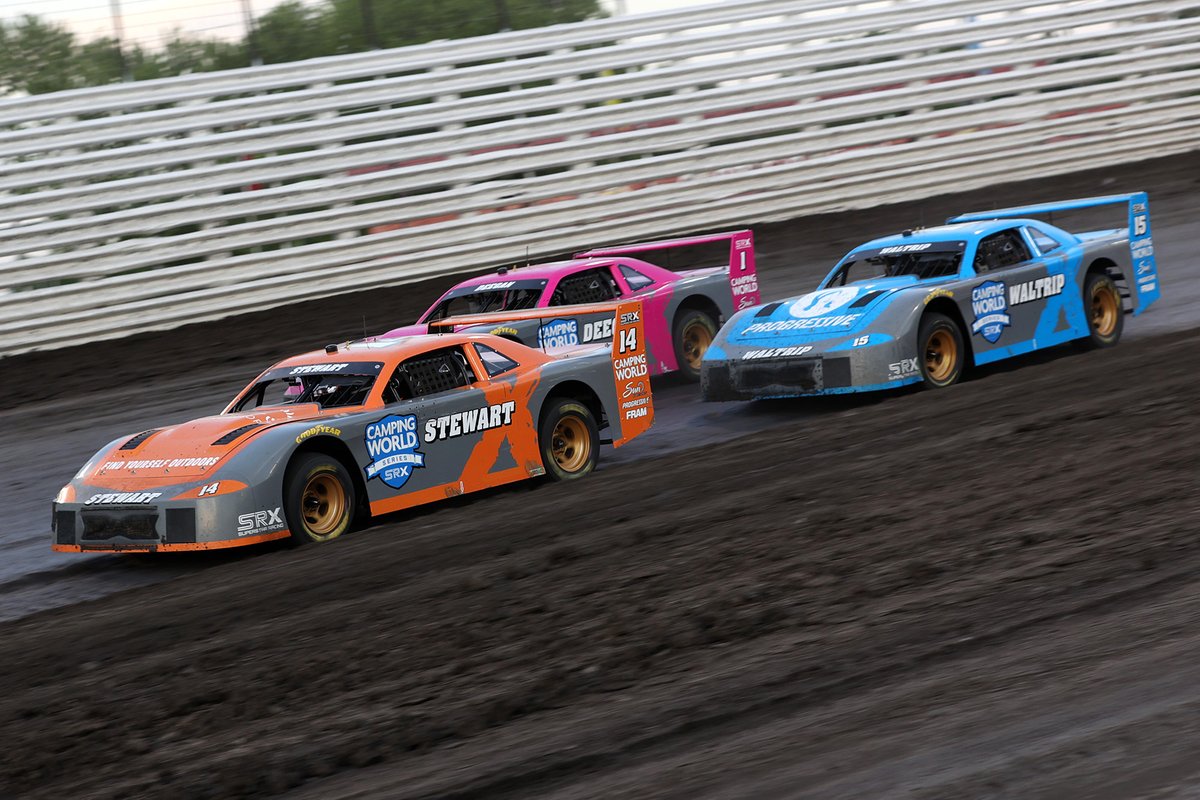 Hailie Deegan, a regular in the NASCAR Truck Series, finished second with a spirited drive and Ernie Francis Jr., impressed again with a strong third-place finish.

“My goal coming into this race was to prove to everyone that I deserved to be here. I feel like we did that tonight, running second to Tony Stewart, that’s a huge accomplishment for me,” said Deegan.

Deegan substituted for Tony Kanaan, as a schedule conflict prevented him from competing at Knoxville. The 19-year-old Deegan will fill in for Kanaan again July 10 at Slinger (Wis.) Speedway as Kanaan is slated to race in his native Brazil.

Francis, 23, is the winningest driver in the 55-year history of the SCCA Trans Am Series. He is the youngest champion in Trans Am history and is the youngest professional driver to win seven consecutive championships.

SRX remains on dirt for a second straight week with the next event June 26 at Eldora Speedway in Rossburg, Ohio. After Eldora, the series moves July 3 to Lucas Oil Raceway near Indianapolis; July 10 at Slinger; and its season finale is July 17 at the Nashville (Tenn.) Fairgrounds Speedway.

Every Camping World SRX Series race is broadcast live at 8 p.m. ET on the CBS Television Network with streaming live on Paramount+ Premium.

Note: Starting lineup was based on average finishing positions in Heat Race Nos. 1-2.

Camping World SRX Series Championship Standings (after Round 2 of 6):

Note: Points are awarded in both heats and the feature.