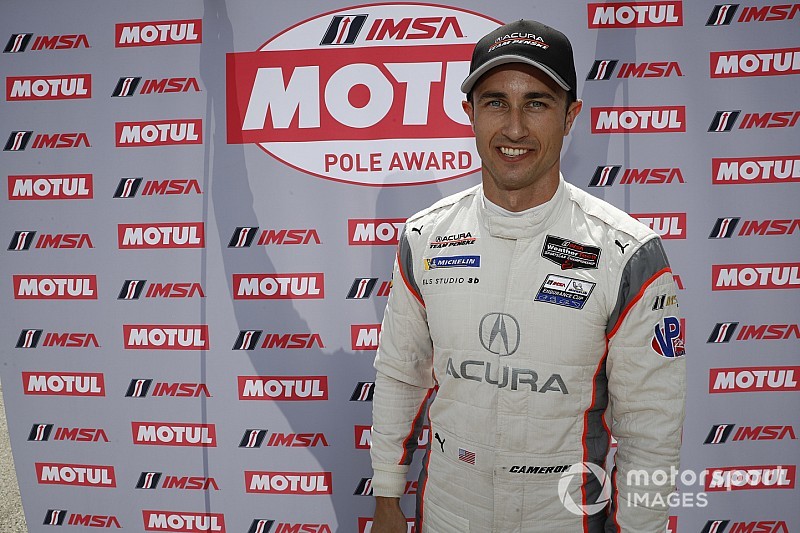 Oliver Jarvis performed superbly for Mazda Team Joest to split the Acura ARX-05s before the session was interrupted by a red flag caused by Matt McMurry dropping his P2 car into a sandtrap.

However, when action resumed and Helio Castroneves went out for the final five minutes, the Brazilian veteran was a man on a mission, and his last effort drew him to within 0.016sec of Cameron to complete an Acura Team Penske front row.

Jonathan Bomarito was not so successful in finding a clean lap in the second Mazda and was disappointed to wind up 0.4sec off teammate Jarvis, but it was still quick enough for fourth.

Simon Trummer earned the honor of being quickest Cadillac DPi-V.R driver in JDC Miller Motorsports' #84 entry but he was 1.2sec off the ultimate pace, albeit 0.2sec ahead of Action Express Racing’s Pipo Derani.

A brief and mild rain shower between the abbreviated GTD session and the GT Le Mans session left some localized damp patches, one of which sent Jan Magnussen’s #3 Corvette C7.R skating on at the final corner, although he dug himself out without assistance.

Magnussen’s teammate Oliver Gavin was the first driver to eclipse the GT Daytona times, and it took until his third lap to do so. Thereafter the track started drying rapidly, Patrick Pilet’s #912 Porsche took a turn at the top but then Tom Blomqvist’s #25 BMW M8 set a new GTLM lap record at 2min00.344sec to go P1. He then pitted.

Gavin looked like he was going to be Blomqvist’s closest challenger, 0.319sec behind; then Ryan Briscoe completed a strong lap in the final seconds to beat Gavin by 0.005sec, but the former IndyCar driver was adjudged to have exceeded track limits at Turn 1 and his lap was invalidated.

Thus Briscoe was relegated to fourth, where he’ll start alongside the second BMW of Jesse Krohn, who was some 0.4sec slower than his teammate.

Two-time Road America winner Ben Keating earned his first pole position in GTD, although the last five minutes of the session were chopped off due to lightning in the area halting the session early.

Nonetheless, given the pace of the Riley Motorsports Mercedes AMG-GT3 all weekend, it seems unlikely that anyone was going to topple him. He was four-tenths clear of the rest of the field, led by Corey Lewis in the Paul Miller Racing Lamborghini Huracan, who just edged Matt Plumb’s Compass Racing McLaren 720S by 0.06sec mere nanoseconds before the red flag.

Tomorrow’s 20min warm-up session starts at 8.30am local (Central) time, with the race getting the green flag at 1.35pm.

UPDATE: Both BMW M8s were sent to the back of the GTLM grid after ride height infractions were discovered in post-session scrutineering checks.

It means the #4 Corvette inherits class pole, ahead of the two Ford GTs and the #912 Porsche.