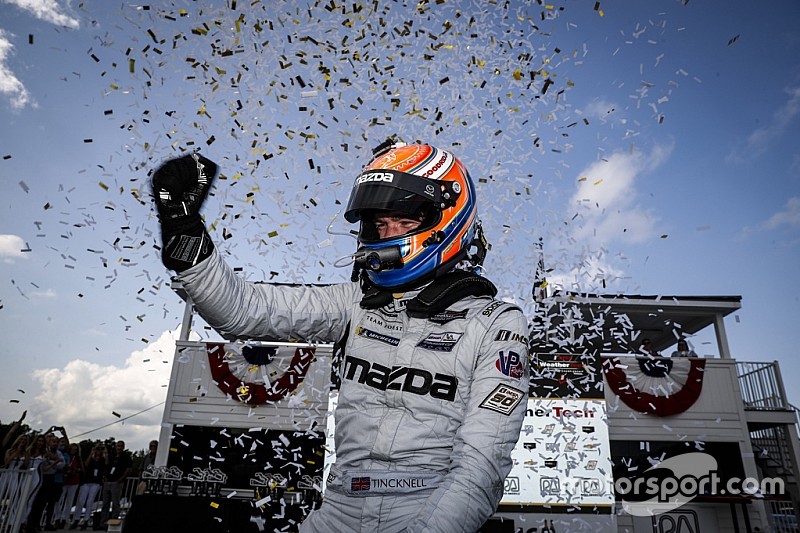 The two Acuras of Cameron and Helio Castroneves eased into the 1-2 positions chased by the two Mazdas of Oliver Jarvis and Bomarito leading Pipo Derani’s Action Express Racing Cadillac DPi-V.R ahead of the fast-starting Renger van der Zande in the Wayne Taylor Racing Caddy which was running brand new Michelins.

Interestingly in the early laps, those two last Cadillacs held on well to the Acuras, whereas the JDC Miller Motorsports DPi-V.Rs rapidly fell away.

On Lap 11, Bomarito passed teammate Jarvis having threatened him from the start and even more so in GT traffic.

Castroneves pitted from second on Lap 14, while next time by Cameron and Jarvis stopped, each handing over to their co-drivers Montoya and Tristan Nunez respectively. Castroneves’ early stop and a hot out-lap allowed him to scrape past JPM to put the #7 Acura in front. Bomarito and van der Zande pitted on Lap 16.

The new-tire advantage meant Nunez made hay in his opening laps so that he was right up Bomarito’s tailpipes as the #55 emerged from pitlane, but eventually Bomarito’s fastest lap of the race saw him pull away and he got the gap to Montoya ahead to less than four seconds.

By Lap 30, just one second covered the top three, and they all pitted. Castroneves handed over to Ricky Taylor, Bomarito gave the Mazda to Tincknell, while Montoya who stayed on board just slotted between these two to regain which would be effectively second position once the other DPis stopped.

Four laps later Taylor pitted again having picked up debris from a crumpled GT Daytona car, and Montoya thus regained the lead but was struggling to hold off the thrusting Tincknell. When Montoya lost a little momentum behind a P2 car at the end of Lap 37, Tincknell slipstreamed him up the front straight, and the Mazda passed him around the outside of Turn 1 going into Lap 38.

Tincknell, having pulled a 3.5sec lead over Montoya, then drifted onto the grass at Turn 3 after lapping a GTD car to allow the Acura driver to slash his deficit to 1.3sec.

Nunez pitted the #77 Mazda from third with 67mins to go and handed back to Oliver Jarvis. Next time by, Tincknell pitted from the lead, which forced Penske to stop Montoya on the following lap and he relinquished the wheel to Cameron. However, that #6 Acura was now 8sec adrift of the #55 Mazda and was starting to come under pressure from Jarvis.

With 50mins to go, the Cameron vs Jarvis battle had drawn to within four seconds of Tincknell, largely due to traffic but their battle and getting held up by a JDC Miller Cadillac saw them drop to seven seconds behind the leader.

With 30mins to go, Cameron and Jarvis stopped, and they remained in the same order but with the Acura having a larger margin. Jarvis was then further hampered by Stephen Simpson’s Cadillac diving past at Turn 6 to get back on the lead lap. The lost momentum for the #77 Mazda lost him 6sec to Cameron. Meanwhile Tincknell was well able to stop and resume in the lead.

Tincknell appeared comfortably able to maintain a gap of 4sec over the hard-charging Cameron in the final half hour, while once Jarvis got past Simpson once more, started closing down on the Acura to try and complete a Mazda 1-2.

In the closing laps, Tincknell lost time behind GTs and suddenly Cameron’s Acura closed right up. Tincknell then ran wide at Turn 4 on the final lap which allowed Cameron to start nosing alongside, but the lead Mazda squeezed the Acura hard with slight contact, and resisted the challenge. The pair would pass the checkered flags just 0.227sec apart.

Jarvis got caught in traffic and was 2.9sec adrift, but this trio were over 70sec clear of the top Cadillac DPi-V.R, that of Felipe Nasr and Derani in fourth, four seconds ahead of the Wayne Taylor Racing entry.

It marked the third straight win for the Mazda RT24-Ps, and the second in three races for Bomarito and Tincknell’s #55.

GTLM: Ford makes it two in a row

Oliver Gavin, having gained pole after the BMWs were put to the back of the class, maintained his advantage at the start ahead of Ryan Briscoe’s Ford GT chased by Laurens Vanthoor’s #912 Porsche 911 RSR. Then came Dirk Muller in the second Ford, Jan Magnussen in the second Corvette, the two BMWs of Tom Blomqvist and Jesse Krohn and Patrick Pilet’s Porsche.

Gavin’s margin over Briscoe swiftly grew to 2.7sec, with Vanthoor trailing by almost six seconds with Miller, Magnussen and the BMWs stacked up behind him.

Pilet, trailing at the back pitted and handed over the #911 to Nick Tandy as early as Lap 10. A couple laps later, Magnussen pitted to hand over to Antonio Garcia.

Meanwhile Gavin in the leading Vette started having to get defensive as Briscoe was filling his mirrors from Lap 15. Eventually Gavin had to concede to the Australian menace. On Lap 21, Vanthoor also tried to make a move on the Corvette but ran off at Canada Corner, allowing Gavin back in front just before he stopped to hand over to series returnee Tommy Milner.

The early stop for the #3 Corvette saw it hit the lead once the two Fords made their first pit visits. After the pitstops, Garcia held a 21sec lead over a brilliant battle between John Edwards’ BMW, Richard Westbrook now in the #67 Ford, Milner and Joey Hand who now occupied the #66 Ford. Garcia then pitted on Lap 35.

Edwards had to concede first and then second place to Westbrook and Milner around lap 43 with 67mins remaining, and eventually he pulled in for a long delay with an apparent braking issue.

Again Garcia would cycle to the front as his principal rivals stopped and with 40min remaining he had a 47sec lead over Westbrook and 54 over teammate Milner with and a further 3sec down. However, Garcia would have to stop again. He finally halted with a 50sec lead and 32mins to go, but he needed a new battery so it was a long stop and he tumbled to sixth in class.

Thus Westbrook was left in the lead with Milner’s Corvette 2.7sec down but under major pressure from the second Ford of Hand. With just six minutes to go, Milner gave up third to Hand, and then ducked into the pits for a splash and dash, and fell behind teammate Garcia.

Westbrook’s eventual winning margin over Hand was 10.6sec, while Earl Bamber brought the #912 Porsche home a further 17sec behind, ahead of Garcia whose Corvette displaced Connor de Phillippi’s BMW M8 at the last gasp.

Plumb fell off the track and dropped to sixth, but that became fifth when Keating was seen creeping back to pitlane with broken suspension.

Following the first round of stops, Bryan Sellers took over the PMR Lambo to lead Matt Campbell now steering the Pfaff Porsche, with Plumb in third in the McLaren, chased from a distance by Jack Hawksworth’s Lexus and Bill Auberlen in the Turner BMW. Further back, collisions between Dennis Olsen in the Wright Motorsports Porsche, Katherine Legge in the Heinricher-MSR Acura and Pat Long in the Park Place Motorsports Porsche resulted in penalties and damage that would effectively knock them out of contention.

Following the next round of stops, Campbell emerged in front of Sellers, the pair of them 15sec ahead of Hawksworth and Auberlen, with Mario Farnbacher’s MSR Acura a further 22sec back, but ahead of Paul Holton in the Compass McLaren. However, Holton would regain fifth, and with fewer than 15mins to go, Auberlen got into the podium position ahead of Hawksworth.

Sadly Holton ran out of fuel and need to pit for a splash of fuel and fell down the order, eventually rolling home 12th.

Campbell held on to clinch class honors for Pfaff Motorsports 5.6sec ahead of the Paul Miller Lamborghini, with Auberlen taking third ahead of Hawksworth, Farnbacher, and the Magnus Racing Lambo.