Drivers Jonathan Bomarito and Harry Tincknell, as well as Mazda North America’s motorsports director John Doonan, have admitted they didn’t expect to beat the Acuras at Road America’s IMSA WeatherTech SportsCar Championship round but that made the win more satisfying. 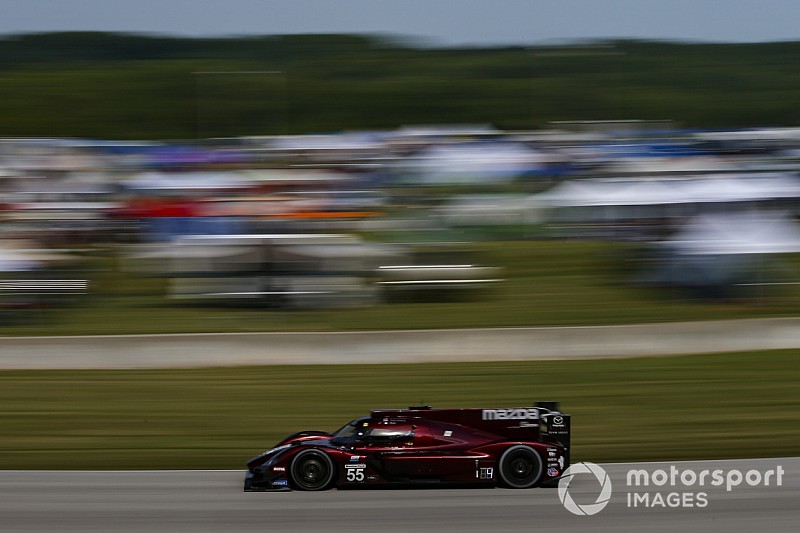 After Bomarito applied the pressure on the leading Acuras in the opening two stints, Tincknell took over the #55 Mazda RT24-P and made a decisive pass around the outside of the polesitting Acura of Juan Pablo Montoya into Turn 1 on Lap 38.

The move came just four laps after the #7 Acura of Helio Castroneves had to make an unscheduled stop to remove debris from a crumbling GT Daytona car.

Thereafter, Tincknell survived an off while lapping the GTD-class McLaren, and then blocked a last-lap challenge from Acura Team Penske’s Dane Cameron to earn Mazda’s third straight win, and the #55 squad’s second.

Bomarito is now third in the championship – Tincknell missed the Mid-Ohio race – while Canadian Tire Motorsports Park winners Oliver Jarvis and Tristan Nunez, who clocked third in the #77 car yesterday maintained fourth on the points table.

Tincknell admitted that Acura’s decisive edge in qualifying at Road America had lowered Mazda Team Joest’s pre-race expectations of contending for the win.

“We had been close all weekend but thought that third place would be a really strong result,” he commented, “but once I took over the car from Jonathan and was able to stay on the back of the two leaders I thought that maybe there was a chance.

“When I got to the lead, from that point on, I had to manage the traffic as best as I could but it was really hard the last three laps and the other cars caught back up to me. Luckily it still worked out and here we are with the third straight win for Mazda.”

Added Bomarito: “What a day, what a race. This is huge for Mazda, for Mazda Team Joest, and for Harry and myself. We came into this race thinking that we didn't have the fastest cars in the race but the Mazda RT24-P did so well over a long run.

“It was a flat-out race with no cautions, and it was really critical to manage traffic, manage our tire wear, and to manage our fuel numbers. We were pushing like crazy to keep pace and taking every opportunity to build gaps in traffic.

“This one, in a way, feels more rewarding than our first win [at Watkins Glen] because that was our race to lose, and here we had to fight so hard."

An emotional Doonan commented: “I almost can't believe that here we are celebrating a third victory in a row for Mazda. This shows how much everyone at Mazda Team Joest, Multimatic and AER has transformed this Mazda RT24-P.

“We felt that we had cars for third and fourth place, but maybe with some clever strategy and use of yellow flags we could have a chance for something better. But all four of our drivers put the cars in a position to win today in a race that had no yellow flags…

"To win here at Road America, the racetrack where I grew up, is an incredible feeling for myself and my family.”