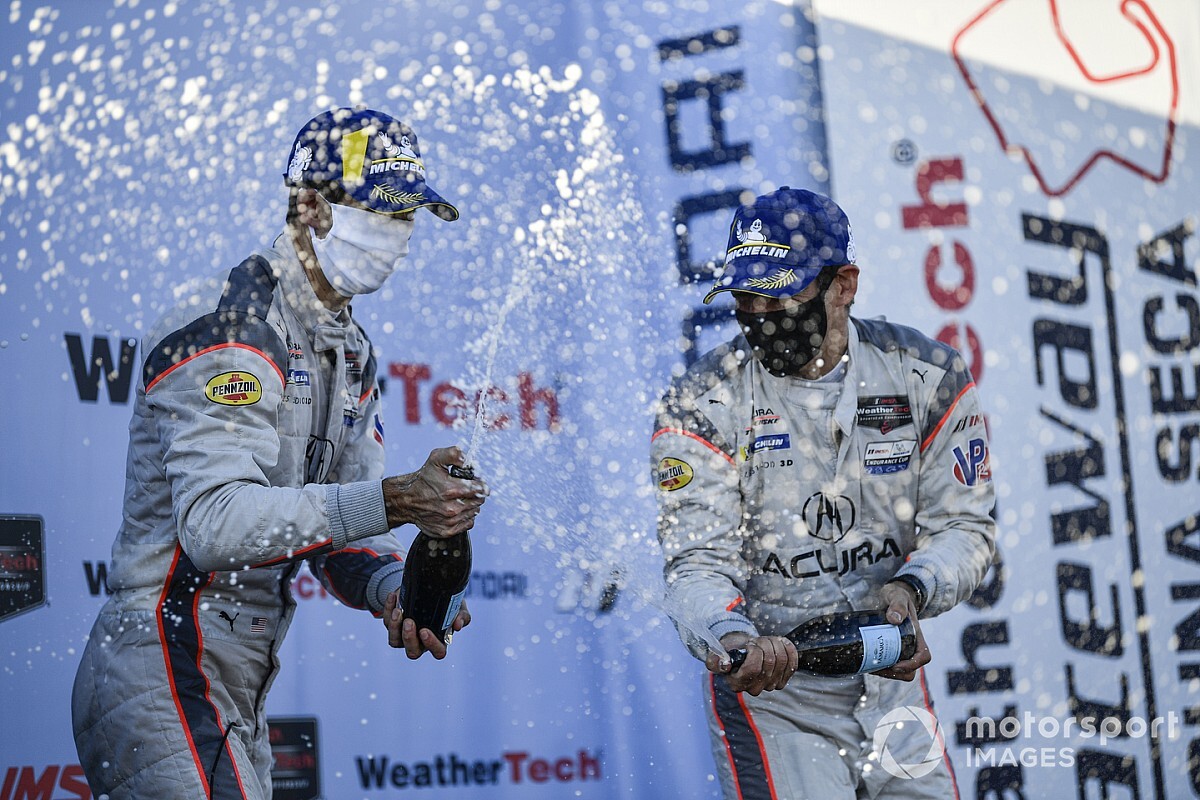 Acura's polesitter Juan Pablo Montoya took the lead from teammate Castroneves at the start, chased by the Mazda of Oliver Jarvis, whose teammate moved up two places to take fourth. Pipo Derani was the loser, the Action Express Racing Cadillac DPi-V.R dropping to sixth behind the similar JDC-Miller MotorSports car of Tristan Vautier. Championship leader Ryan Briscoe held seventh for Wayne Taylor Racing ahead of Matheus Leist in the second JDC-Miller machine.

By Lap 8, however, both Derani and Briscoe were into fifth and sixth, Derani having dive-bombed Vautier at the final turn and Briscoe opportunistically diving through. Derani’s momentum continued, closing on Bomarito ahead before diving down the inside of the Mazda at the start of Lap 15. Briscoe too, would soon pass Bomarito, while Vautier would be the first of the Prototypes to stop, on Lap 22, Bomarito and Leist stopping three laps later.

Jarvis and Derani came in for fuel and tires on Lap 25, the Acuras waiting one lap longer. Castroneves had fallen over 6sec behind Montoya by this point, and had flicked off his left-front dive planes on the back of a Corvette while lapping it. His stop saw him hand off to Taylor, who then had to work hard to stave off Jarvis and Derani as he emerged from pitlane. Jarvis’ momentum was slightly checked by the cold-tired Acura, and Derani took full advantage to dive down the inside of the #77 Mazda at Turn 2.

Briscoe finally stopped on Lap 30 and handed over to Renger van der Zande who emerged sixth, 10sec behind Bomarito, which meant that Cameron – who’d replaced Montoya – was able to continue his teammate’s fine work. By Lap 35, his lead was out to 10sec, as Taylor endeavored to maintain second, despite his Petit Le Mans foe Derani ducking and weaving in his mirrors.

Van der Zande moved past Bomarito to gain fifth on Lap 48, not long before the Prototype class started their second round of stops. Felipe Nasr, taking over from Derani, undid some of his co-driver’s hard work to stay on the tail of Taylor, as he understeered into the pitlane/track dividing sand ‘island’ as he exited, and falling 4sec behind the Acura. Harry Tincknell took over the #55 Mazda from Bomarito, Sebastien Bourdais replaced Vautier in the #5 JDC-Miller Caddy.

The #10 Wayne Taylor Racing Cadillac was a late stopper again, having cycled to the front, and van der Zande emerged in sixth, 10sec behind Tincknell who had just set his fastest lap of the race as he tried to close down the sister car, now piloted by Tristan Nunez.

Nasr had been working hard to rectify his little gaffe, and by Lap 66 he was filling Taylor’s mirrors as the Acura tried to lap Bourdais’ Cadillac.

Nasr and Nunez pitted from third and fourth respectively with 45mins left, while the two Acuras pulled in next time by, and van der Zande stopping with 42mins remaining. Tincknell was the last to stop, but he hadn’t been able to jump Nunez. However, now he started to reel him in.

Taylor caught teammate Cameron over the last 40mins – not a result of Taylor speeding up so much as Cameron slowing down, presumably a result of team orders.

With 26mins to go, Tincknell had the deficit to Nunez down to under 1sec, partly a result of another fastest lap – although van der Zande stole fastest lap next time by – and on Lap 101, the #55 Mazda moved into fourth place. Remarkably this pair running side by side caused a yellow by apparently dragging the #7 Acura’s broken dive planes from trackside onto the racing surface!

That removed anybody’s fuel worries, and conveniently allowed the #7 Penske to close up to the #6 Penske. It also gave van der Zande the chance to drive around the outside of Nunez to claim fifth – possibly crucial in the title fight – but fell back behind further around the lap.

Reigning but outgoing champion Cameron made the ultimate sacrifice for his teammates on the penultimate lap, giving up a certain win to Taylor, eventually crossing the line 0.487sec behind. Taylor and Castroneves now head the WTR Cadillac drivers Briscoe and van der Zande by two points, with Action Express's Derani a further 10 points in arrears.

Pole-winner and championship leader Jordan Taylor maintained his advantage for the #3 Corvette C8.R from the drop of the green, the #912 Porsche 911 RSR of Laurens Vanthoor hanging on to second ahead of Oliver Gavin.

The big mover was Frederic Makowiecki, moving the #911 Porsche ahead of the two BMW M8s of Jesse Krohn and Bruno Spengler that swiftly fell off the pace. Spengler, indeed, was 10sec off the class lead by Lap 5, 15sec down after a dozen laps.

Vanthoor, having sat within 0.3sec of Taylor’s Corvette, pitted on Lap 16, and Taylor followed suit next time by but emerged behind the #912. Krohn pitted his M8 on Lap 19, Gavin on Lap 20, leaving Makowiecki up front, 13sec ahead of Spengler but only for a couple of laps before the #911 halted too. Spengler stayed out but lost his lead to Vanthoor, and finally pulled in on Lap 34 and ceded the seat to Connor De Phillippi.

So now Vanthoor ran 14sec ahead of Taylor who at this point just didn’t seem to have the pace, although he had an 11sec margin over Makowiecki. However, Taylor appeared to gain a second wind at this stage, hacking Vanthoor’s lead to under seven seconds by Lap 47, while extending his margin over the other 911 to 15sec.

After the second stops, their co-drivers Earl Bamber and Antonio Garcia continued this battle for the lead, but the other #911 of Makowiecki managed to run 65mins before making what would clearly be the last stop in a two-stop strategy and handing off to Nick Tandy.

It seemed a brave gamble from Porsche, but given that the #912 was leading the class relatively comfortably (3sec over Garcia with 50mins remaining) it helped cover off two potential outcomes. De Phillippi was trying to do the same in the #25 BMW but was traveling at a different speed, 25sec off Tandy’s pace.

Bamber dropped into the pits for the final time with 46mins remaining, and Garcia halted next time by and resumed 5sec in arrears, but with 9.6sec in hand over Tandy in third, with none of the cars needing to stop again. The three-minute yellow flag alleviated Tandy’s fuel worries, but a couple of laps after the restart Milner passed the Porsche for the final podium position.

The other Corvette of Garcia kept Bamber under pressure all the way to the end, eventually finishing 0.981sec behind the #912 car which scored its first win of the year, and Porsche’s second consecutive IMSA win.

The Meyer Shank Racing Acura NSX of Matt McMurry held its advantage over Robby Foley’s Turner Motorsports BMW M6 at the start, while the second MSR car of Misha Goikhberg moved ahead of Cooper MacNeill’s Scuderia Corsa Ferrari 488. Frankie Montecalvo’s AIM Vasser Sullivan Lexus RC F ran fifth ahead of Ian James’ Aston Martin. Meanwhile Aaron Telitz, who had started near the back of the GTD field due to a puncture in qualifying, ran 11th.

The first round of pitstops saw Mario Farnbacher take over the lead car from McMurry and maintain a 7sec lead over the Turner BMW now piloted by Bill Auberlen. Alvaro Parente and Alessandro Balzan now ran third and fourth in the second MSR car and the Scuderia Corsa Ferrari respectively but the changeover from Montecalvo to Townsend Bell had seen the #12 Lexus drop a couple of places behind the Aston Martin (now with Roman de Angelis at the wheel) and Pat Long in the Wright Motorsports Porsche 911 GT3 R.

However, the second Lexus had gained, the AVS team short-filling its #12 car, so that when Jack Hawksworth took over from Telitz, the car emerged in eighth. It didn’t profit him much, however, as he lost out to Lawson Aschenbach’s Riley Motorsports Mercedes-Benz AMG GT3 long before the second stops.

Auberlen stopped with 67mins to go, and the other leading GTD contenders filed in over the next two laps. The main change was Wright Motorsports bouncing the 911 ahead of the Aston to claim fifth.

Following the restart with 18mins to go, Pat Long outbraked himself at Turn 2 and struck the Scuderia Corsa Ferrari, spinning the 488 to the back of the field, allowing Roman De Angelis’ Aston into fourth ahead of Lally’s Magnus Racing Lamborghini.

Farnbacher left Auberlen behind, leaving the BMW legend to stave off the other Acura of Parente who only just beat the Aston Martin.