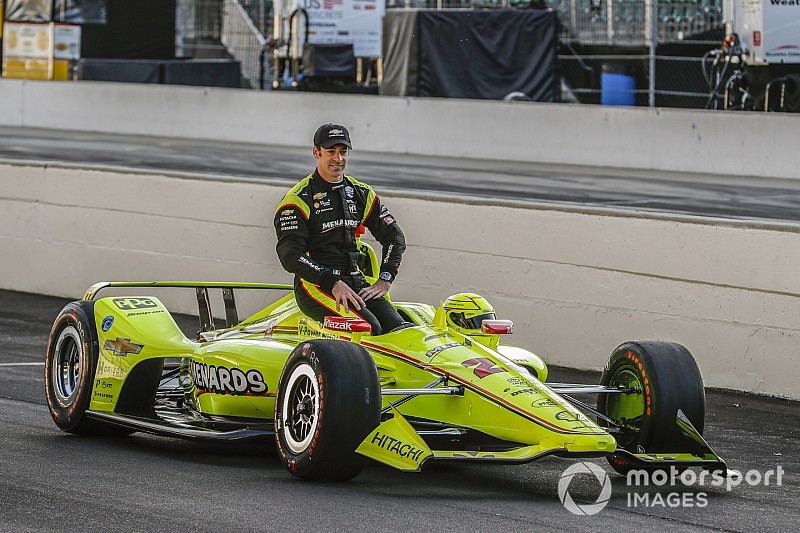 Team Penske-Chevrolet’s Indy 500 polesitter Simon Pagenaud says he wants a warm Indy 500 because his car is handling so well, but he believes a cool one will be better for the fans because that will help pack the field closer.

Pagenaud, who last Sunday earned his 10th career pole and Team Penske’s 18th for the Indianapolis 500, also set fastest time in race conditions in Monday’s two hour practice session. That was the penultimate track time for the IndyCar drivers before the 103rd Running of the Indy 500 presented by Gainbridge. The last session will be coming on Carb Day, Friday, with a session that has been extended to 90 minutes, starting at 11am. The Pitstop Competition will follow at 2pm.

Although his top time in Monday’s session doesn’t mean much as most drivers were testing how their cars worked in traffic and were therefore getting huge tows from several rivals, Pagenaud appeared to have one of the most settled cars on track, able to run in traffic. He admitted it may not mean a lot, however.

“The tricky part is that it was so cold that every car feels good,” he said. “Obviously we have a good idea on where our car is at, but you want to see what the competition is like as well, and that's why you saw me running a lot behind people and cycling to the back to try to understand who was strong and how they were driving their cars.

“But I think we've got a really good balance so far. I think we still need to find a little more front grip alone and in traffic, and I think we'll be in really good shape. Then the tricky part is going to be to find the right level of downforce for the race. With the temperature changing, that's a very relevant point that is very important to work on with the engineers.

“I would welcome a higher temperature [for the race] because I think we have a better chassis than most, and I think it'll make more of a disparity with other cars. So I would welcome that, obviously, as a competitor.

“As a race fan, I would rather have a cool race because the racing would be a lot more packed and more fun to watch. So we'll see.

“No matter what, I think IndyCar made some really good changes – and the Firestone tires. They did a great job giving us a little bit more grip, and the new front wing extensions were working really well in traffic. All in all, it's very positive.”

He later added: “We don't really use the tires badly at all, and I think we're not sliding, so we can run really low downforce without sliding, and I think that's why the consistency is there.”

Asked by Motorsport.com whether he was expecting it to be a race where a driver wouldn’t want to run up front because it hurt fuel mileage – and whether he had practiced running in clean air to judge the fuel consumption difference – Pagenaud said: “I can't tell you all my secrets! But you have some very valid points, that's what I can say. That's the name of the game – to be at that point and not having to work too much on the car. I think we're ahead of our program, meaning that we were able to realize how strong we could be while saving fuel, and if we could follow saving fuel, if we could pass saving fuel…

Pagenaud also stayed coy on Chevrolet’s fuel consumption compared with Honda, as the HPD units have been known to be superior in that regard on all types of track.

“Let's just be honest,” said the 2016 IndyCar champion, “it's something that the engine manufacturers all work on, efficiency of the engine. If one engine manufacturer is better at fuel economy but performance is the same as the other, then they work on fuel economy, right? They're always looking at areas to improve, and I have to say Chevy has been absolutely tremendous. But so has Honda. It's just amazing competition right now.

“I don't think we give the two manufacturers enough credit for what's going on in IndyCar. It's a very tight box for them to work on with very strict regulation, and still we gain I believe it's around 20 to 30 horsepower every year, and the fuel economy keeps getting better and better.

“And it also helps for the road cars because we run the V6 engine and you see that kind of engine in a lot of different cars on the road. So it's pretty cool to see. And I feel like, again, Indianapolis is part of the evolution of road cars, as well. So it's pretty cool.”

“Nothing went right” – How Alonso and McLaren failed at Indy